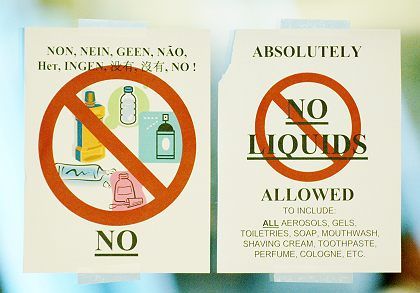 One German apparently took the flight restrictions a bit too seriously -- and forgot to put on his deodorant.

In the old black and white deodorant commercials, suburban housewives would lean over and whisper "B.O." in the ear of a perspiring friend. The well-intended abbreviation, at that time still a euphemism, was meant to warn the unfortunate individual of an unattractive body odor problem.

A German man returning from Honolulu to Düsseldorf could have used just such a sympathetic peer to caution him before he boarded his British Airways flight. A well-timed word could have saved the perspiring Teuton a lot of money and inconvenience -- he got kicked off the plane for being too smelly.

The man was in his seat, ready for take-off, when the women sitting next to him complained to cabin crew about her neighbor's over-powering stench. The obvious expedient of a change of shirt was not an option -- the man's suitcases were already stowed in the hold. And so the bromhidrosic individual was asked to leave the flight.

The man, who claimed he had overheated while dragging three suitcases around the non air-conditioned Honolulu airport, tried to sue BA for damages. He demanded €2,200 to compensate him for his wasted time and for missing his connection back to Düsseldorf.

A first attempt failed when it transpired that the airline's conditions of carriage allow individuals with extreme body odor to be refused passage. His second attempt, brought to a higher court in Düsseldorf, was thrown out Wednesday when the man, apparently plagued by transportation problems as well as those of personal hygiene, got stuck in a traffic jam and failed to show up for the hearing.

Commenting on the case, BA's lawyer Martina Griebel spoke out for zero tolerance of stinky passengers. "Personal freedom has to come to an end when it limits the freedom of others," she said. "This is certainly the case with strong body odor."