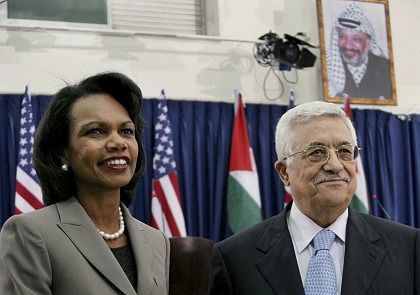 US Secretary of State Condoleezza Rice during a press conference with Palestinian President Mahmoud Abbas in Ramallah on Monday. The time has come for establishing a Palestinian state, Rice said after the meeting.

It has officially been a secret of American diplomacy, if not a particularly well-kept one: the time and place of the international conference called by President Bush to begin negotiating peace between the Israelis and the Palestinians.

Secretary of State Condoleezza Rice on Monday lifted the secrecy and, perhaps, nudged the process forward.

We have better things to do than invite people to Annapolis for a photo op, Ms. Rice said after meeting with the Palestinian president, Mahmoud Abbas, in Ramallah, referring to the capital of Maryland and home of the United States Naval Academy.

Ms. Rice also let slip the words November document, setting a deadline of sorts for the Israelis and Palestinians to agree on a written document to serve as the basis for the peace talks. The conference is expected to begin Nov. 26, Israeli officials said.

With time running out on his tenure, President Bush has called for an international conference to be held in the United States this fall as part of a renewed push to settle the Israeli-Palestinian conflict, trying to leave a legacy that has enticed and eluded his predecessors.

In Ramallah, Ms. Rice, on her seventh trip to the region this year, described Mr. Bushs initiative as the most serious effort to end this conflict in many, many years. In some of her strongest language yet, she said, Frankly, its time for the establishment of a Palestinian state.

Yet Ms. Rices initial talks during a four-day visit to the Middle East showed how difficult it remained to get the two sides to agree even on the terms of a meeting.

Appearing with Ms. Rice at the Palestinian Authority compound in Ramallah  which Israeli forces battered in 2002 as his predecessor, Yasir Arafat, was holed up inside, and which has been partly rebuilt  Mr. Abbas reiterated that even the initial document must address the most contentious issues.

Those include the borders and capital of a future state, the return of refugees, the dismantling of settlements and water rights. And he insisted that a detailed document be concluded before the conference could begin.

Everything should be clear in the conference, Mr. Abbas said. The negotiations to follow should not be open-ended, he added.

Israels prime minister, Ehud Olmert, has expressed a willingness to address the criteria for a peace deal only in the broadest terms.

Still, he has met with Mr. Abbas several times to discuss the document. And in what officials described as a testing of the domestic waters, Mr. Olmert on Monday addressed one of the core issues, implying that he would be ready to give up some outlying Palestinian neighborhoods of East Jerusalem.

Was it necessary to also add the Shuafat refugee camp, Sawakhra, Walaje and other villages to Jerusalem and define them as part of Jerusalem? he said in Parliament, referring to parts of the city Israel absorbed after seizing East Jerusalem and the West Bank in 1967. I must therefore admit it is possible to raise legitimate questions.