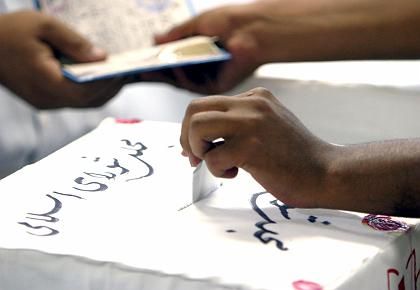 The presidential elections in Iran had an unexpected outcome. Some are alleging fraud.

When Mehdi Karroubi entered the offices of the student press organization, INSA, at 4 p.m. on Saturday, the cleric's world was still in perfect order. In the courtyard, dozens of students were waiting, cheering him. The throng was so large Karroubi was barely able to squeeze into the building. At that moment, Karroubi was still considered the upset second-place candidate in Iran's presidential race. Polls showed he should have made it into the run-off vote -- currently scheduled for Friday -- against the favorite, Ali Akhbar Hashemi Rafsanjani.

Yet even during the moment of victory, Karroubi knew the tide would change. And he had barely ended his press conference as the official announcement came: Suddenly, former Tehran mayor and outsider Mahmous Ahmadinejad was in second place. Karroubi, a moderate Islamic reformer, had lost out to Ahmadinejad, a true hardliner and former commander of the Revolutionary Guard.

In the wake of the elections, Karroubi has accused the Revolutionary Guard, the intelligence service and religious hardliners of election fraud. He believes people were bribed in the election and that the military "meddled" with the results.

"There have been interferences, they have paid money," Karroubi said. He has called on the religious Guardian Council to allow an independent commission to investigate the election results and to conduct recounts in four of Iran's most-populous cities, including Tehran and Isfahan.

Karroubi declared several times over the weekend that he possessed video tapes and had witnesses who could prove the poll had been manipulated. But he said he would only present this evidence if there is an official investigation. 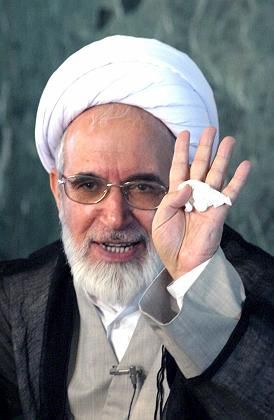 Reformer Karroubi's allegations of rigged elections have caused an uproar in Iran.

Nevertheless, in post-Revolution Iran, where Ayatollah Ruhollah Khomeini, the country's Islamic spiritual leader, still has an iron grip on the government, the fact Karroubi would come forward with such allegations is exceptional. There are, of course, a number of other conspiracy theories, and rumors of deceit making the rounds. But for a respected cleric to make such concrete allegations has caused a sensation.

Sowing the seeds of dissent

And Karroubi isn't the only one with doubts about the outcome. Mostafa Moin, the reformer who landed in fifth place on Saturday shared similar criticisms in a guest column in the reformist Iranian newspaper Shargh. "Despite all the warnings, an organized current has threatened the fairness of the elections," the university professor wrote.

Reformer Moin has, however, remained cautious in his criticism -- he wants to avoid a public conflict. "This is a threat for civil society and is blocking reform," he wrote. Though he didn't name any names, sources close to the politician were already claiming on Friday night they had discovered irregularities. One allegation has members of the Guardian Council, who were only permitted to observe the elections, actually counting the votes.

What makes Ahmadinejad's success especially striking is the fact that in virtually every poll, the arch conservative fell far behind the other candidates. And even as his competitors, like Karroubi, tried to lure voters by promising a monthly payment of $60 to all Iranians over the age of 16, Ahmadinejad didn't attract much attention. Outside a percentage of radical voters in conservative neighborhoods in Tehran and voters in rural areas, few thought he stood any chance of getting elected. This fact alone have fueled rumors and speculation about possible manipulations.

Close analysis of the results on Saturday also showed there was no lack of other irregularities. Among them was the fact that Ahmadinejad announced his victory hours before the Interior Ministry had issued any official statements on the outcome. The ministry is officially in charge of the election and announced most of the election results live on state television. Another factor that raised attention was the fact that after the first projections, Guardian Council member Ahmadinejad was in second place, and in the official list he was still in third place behind Moin.

But on Saturday, Ahmadinejad seemed to be doing more to make fun of the accusations of his competitors than to respond to them. At a press conference, after a long recitation of Koran verses, he stated that the losers were still looking to place blame elsewhere than their own election performance. Commenting about his competitor Karroubi, he almost sounded threatening. "It is very obvious that one who has lost would protest now," he said. "I expect Karroubi, who is a cleric and wears sacred clothes, to make his comments with more attention." 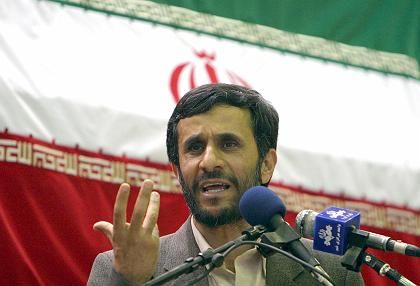 Hardliner Ahmadinejad was not expected to do well in the vote.

The discussion about election fraud is likely to become a heated issue in Iran in the coming days. Just after Karroubi's press conference, Mostafa Kaevakenian, the head of the Mardom Salari party, angrily took to the microphone. He called for a national strike on Tuesday if recounts aren't held in the election. But it was difficult to ascertain how serious this threat should be taken or how great the party's potential is for mobilizing protestors.

In a television speeched aired this weekend, outgoing President Mohammad Khatami attempted to cool tempers across the country before they could flare up. He invited television teams to accompany him during his visit to the Interior Ministry.

Khatami said the election had been properly and carefully organized, and the reformer, who has a reputation of being a conciliatory figure, said: "Anyone who says anything else is wrong."

On the streets of Tehran, more seemed to be shocked by the victory of former militiaman Ahmadinejad than by the allegations of a rigged election. Virtually no one thought the hardliner had a chance.

Despite his civilian attire during the election, for many Ahmadinejad's past was still present. Just after the revolution, he became a senior officer of the Revolutionary Guard -- a group infamous for the brutality with which it enforced government edicts. Tehran residents have likewise repeatedly alleged that he was personally involved in the assassination of political dissidents.

Nor was his time as commander of the religious army the only period in which he sought to refine his reputation as a dogmatic politician. As mayor of Tehran, he banned all advertisements he believed to run counter to the beliefs and practices of Islam. He created a furore when he banned images of soccer star and pin-up David Beckham. He also imposed strict Islamic dress codes for city employees.

And having such a religious conservative at Iran's helm would also have international consequences. Unlike his main competitor in the election, he has called for talks with Europe over Iran's nuclear program to be immediately suspended. By contrast, former two-term Iranian President Ali Akbar Hashemi Rafsanjani has called for a cautious continuation of the talks.

Ahmadinejad's success in the poll has turned every possible scenario for the run-off on its head. Prior to the election, people expected that the run-off would be between a reformer like Moin and moderate cleric Rafsanjani.

Instead, 70-year-old Rafsanjani and Ahmadinejad have become symbols for two possible paths Iran could take after the election. Rasanjani represents the continuation of reforms and the opening of Iran to the west, and Ahmadinejad is a dogmatist, who would rather go back in time than forwards.

Ahmadeinejad often underscored this attitude during the campaign. "We didn't conduct a revolution," he told his followers, "so that we could become a democracy."