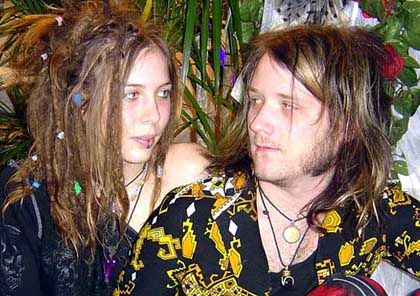 Leona Johansson and Tommy Hol Ellingsen are hoping to save the rain forests with pornography.

The scene in the staid, wood panelled courtroom in the Kristiansand City Court in southern Norway last November was a touch unusual. Two young defendants -- she, 21, dreadlocked and wearing a juvenile-looking ensemble complete with a pink top and baby-blue dress, he, 28, tattooed and wearing a black stocking cap to go with his black concert tank top -- were led in to face the judge.

The charges? "Conducting an improper act in a public place." In other words, they had sex on stage -- to the hard rock riffs of rock band The Cumshots -- in front of 50,000 titillated fans during the Quart music festival. A big no-no in Norway. The couple were duly fined $1,400 each but not before Tommy Hol Ellingsen, the male half of the duo, dropped his pants in the courtroom to show the judge exactly which bit of his anatomy had gotten him into the fix in the first place. Unmoved, the two refused to pay the fine -- and promptly left the country and headed to Germany.

Yet what at first sounds like a back-page tabloid story is actually a tale of youthful idealism. The two -- Leona Johansson is Ellingsen's better half -- see themselves as environmental activists and their public fornication foible was simply the medium through which they hoped to raise the profile of a cause very close to their hearts: saving the world's rain forests. F*** for Forest (FFF) is the eyebrow-raising fruit of their philosophy, a pornography Web site where online subscribers can access films and pictures of the couple and their friends getting up to all kinds of tantric, tree-hugging mischief. And far from being scared away by the Norwegian court, the couple has now set up shop in what they hope will be a slightly more liberal environment: Berlin. 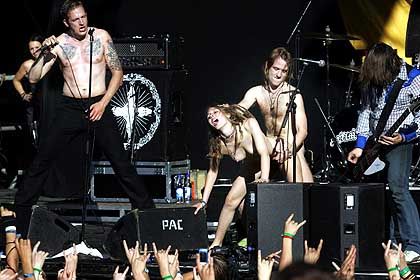 This kind of thing can get you in trouble in Norway.

Befitting the environmental message the couple is attempting to impart, the FFF Web site -- liberally interspersed, of course, with scenes of woodland carnal abandon -- features informed discussions about our world's imperilled rainforests and information on the dangers they face. "We are losing 33.8 million acres of tropical forest per year," for example. Or, "Experts estimate that the last remaining rainforest could be consumed in less than 40 years." And, on a more micro level, "We lose 20,000 to 100,000 species a year -- four species per hour -- due to tropical deforestation."

It's a message -- and a delivery -- that has found resonance. Not only can visitors satisfy their libidos, but they can do so in the comforting knowledge that the profits from their subscription are going to a good cause. In just seven months, FFF has attracted more than 1,000 members and has brought in more than $120,000.

But is the world really ready for eco-porn? The short answer appears to be no. Fearful of negative publicity, particularly in a largely Catholic South-America where the world's largest tropical rainforest -- the Amazon -- is located, many organizations including the Dutch branch of the World Wildlife Fund (WWF), have turned the money down. "The reason for this decision," WWF wrote in a letter to the couple, "is that our organisation has a policy which states that we cannot connect our brand name and logo to certain sectors of industry. Your sector, unfortunately, is one of these."

"I understand their reaction, but I can't really accept it," says Ellingsen. "We wouldn't want to destroy anything for anybody though. We are in contact with a number of organisations now, but we have to be credible. We have to show people where the money we make goes."

So much to do, so little time

Yet aside from the odd public indecency law and the difficulties of persuading people to take their money, the biggest problem the couple faces is that there are just not enough hours in the day. When they are not having sex in front of the camera, they have to respond to hundreds of e-mails (many from supporters offering their acting services), as well as updating their Web site and contacting environmental organizations. Plus, the pair is also negotiating with a US documentary maker about producing a film depicting the FFF actors visiting a South American tribe, whose way of life is threatened by deforestation. And just for good measure, they also tour festivals and outdoor events all over Europe, on the look out for volunteers and to spread the FFF philosophy.

"Sometimes it can be really too much," Johansson laments, "but we're getting more and more people involved. We get lots of volunteers who offer their help (and sexual talents) free of charge." 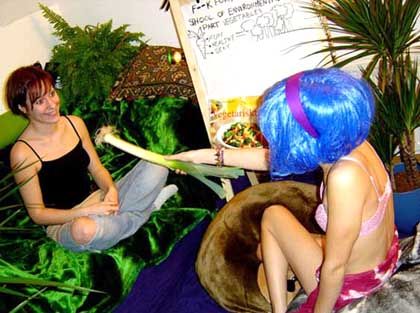 Johansson instructing a volunteer on the finer points of eco-porn.

Having a base in Berlin now allows the couple to raise even more money for their pet project. After all, rent prices are much cheaper here than in their native Norway. But also, the former home of the world-renowned festival of licentiousness, the Love Parade, also has a reputation for its liberal attitude toward sex -- a factor that Ellingsen readily admits. "We are attracted by the tradition of protest in Germany, free speech, and that people say what they want here," he says. Not that Germans couldn't learn a thing or two. "The Germans aren't very good at talking about sex...Sexuality can be a problem for people here, like everywhere else."

The couple hope to drum up more support across Germany this summer. They are adamant that their message is one people need to hear. As Ellingsen says: "People are intelligent, but too many just don't care. If they really were intelligent they would care for the world we live in. I think everybody could do more."