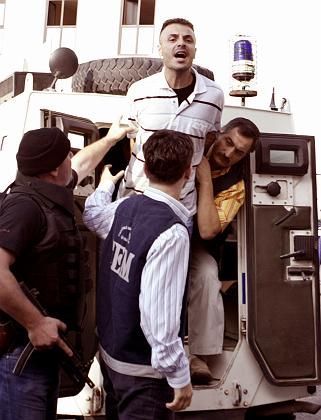 The Turkish interrogators in Istanbul's high-security prison wanted to be polite; they wanted to show respect for Islam. They offered their prisoner, an Islamist named Luai Sakra, 31, a chance to pray during a pause in questioning.

They'd done the same thing with earlier suspects. The move was supposed to establish trust.

But this prisoner reacted a bit differently. "I don't pray," Sakra answered politely, "and I like alcohol." When the baffled officials didn't want to believe him, he elaborated: "Especially whiskey and wine."

It wasn't the only surprise the Syrian-born suspect presented to investigators. Turkish anti-terror officials held the suspected al-Qaida member for four days. Just after his arrest two weeks ago, Sakra admitted to planning strikes against Israeli cruise ships; he hoarded 750 kilograms of explosives for the purpose. When some of those explosives went up in flames in his Antalya apartment, he fled.

What Sakra told officials during his interrogation suggests a deep jihadist career. The Syrian, who knows weapons as well as he knows his whiskey and wine, has obviously played a far more important role in the terrorist underground than officials first suspected. According to his own testimony, he knew about the London bombings before they happened, and supported the pilots on 9/11.

"I was one of the people who knew the 9/11 perpetrators," Sakra reportedly said in passing during the interrogation, "and I knew the plans and times beforehand." He claims to have provided the pilots with passports and money.

These details, if true, close some gaps in the narrative of the worst terrorist assaults in history -- and they raise a question which German investigators have wrestled with in past week: Did Sakra -- who lived from September 2000 to July 2001 with his wife and two small children as an asylum-seeker in the southern town of Schramberg -- work with anyone else in Germany? Are there any unknown contacts still out there who know what he knows?

Western investigators accept Sakra's claims, by and large, since they coincide with known facts. On September 10, 2001, he tipped off the Syrian secret service -- which had chased him since 1999 for his role in a revolt in a Lebanon refugee camp -- that terrorist attacks were about to occur in the United States. The evidently well-informed al-Qaida insider even named buildings as targets, and airplanes as weapons. The Syrians passed on this information to the CIA -- but only after the attacks. Sakra owes his rise in al Qaida to the Palestinian Abu Subeida, a bin Laden confidant now in custody, who ran a sort of recruiting office for new mujahideen in the Pakistani city of Peshawar. From Abu Subeida's testimony, the CIA knows that he and the young Syrian soon came to trust each other.

With help from his mentor in 1997, Sakra attended a military training camp in Khalden, where he drilled with about 80 other volunteers. They trained with Kalashnikov rifles and practiced using explosives, especially TNT and C4. In Khalden, Sakra also met the German Christian K., a Muslim convert who later served as his translator when he was waiting for asylum in Schramberg. Christian K. married one of Sakra's sisters in Aleppo in 1998.

Abu Subeida sent the Syrian back and forth to Turkey, to help build new branches of his terror network. When bin Laden started a new camp for Syrians and Jordanians in 1999 in Herat, Afghanistan, he handed leadership responsibilities to five Arabs. One was Sakra; another was the Jordanian Abu Musab al-Zarqawi, the current chief of al-Qaida in Iraq. The two of them quickly became friends.

Those years in Herat helped establish a still-growing terrorist network that's responsible for a large portion of attacks in the Near and Middle East. During one of his interrogations, Sakra claimed to have fought personally for Zarqawi in Iraq, apparently in Fallujah, the rebel stronghold where American forces found a number of torture chambers after a raid in late 2004.

A video allegedly recorded in Fallujah played an important role for Turkish investigators: Sakra boasted to an Istanbul magistrate that he'd attended the execution of a kidnapped Turkish truck driver in Iraq.

The video shows the death of driver Murat Yüce in August 2004, at the hands of armed, masked fighters for Zarqawi. Sakra gave a running commentary with a slight smile and no remorse: "Look, now they'll cut off his head. Soon they'll take that pistol off the table, so the blood won't ruin it." And, like a ballistics expert: "Blood wrecks the insides of a pistol."

This cold-bloodedness -- mixed with moments of high emotion -- may be related to Sakra's shaky mental health. He comes from a well-to-do family, but officials who arrested him at an airport in Diyarkbakir found phony papers under the name "Ekrem Oeyer," along with $120,000 in cash, as well as a bottle of psychopharmaceuticals and antidepressants. Officers of the CIA and the Turkish intelligence services (MIT) who took part in this operation thought it was strange that such a hot-tempered mujahid, in custody, could sometimes act so extroverted, while at other times become so apathetic.

The man's mental condition, his precisely-timed arrest shortly before an attack, and his statements in the meantime have provoked speculation that Sakra was in contact with several secret-service agencies for years. Turkish media reported that the CIA had contacted him twice in 2000, and tried to tempt him with money, apparently very large sums. Then the CIA lost his trail and turned to the Turkish MIT for help.

Sakra's attorney, Ilhani Sayan, who believes some of Sakra's statements but not others, claims that in August 2001 -- four weeks before the assaults in America -- the MIT picked up their man, but let him go. Sakra himself says he was arrested twice by the MIT but freed again, both times. In 2003, his wife was also supposedly detained and interrogated for 20 days.

Sakra's family lived in Turkey from 1960 on, but then emigrated to Syria, and subsequent financial strain may have been a reason for the fanatical Islamist to cooperate (at least sometimes) with officials.

But Sakra never became the high-value al-Qaida informant which the CIA so desperately needs; and in the meantime the various intelligence agencies realized that any hope of controlling Sakra was just a deadly dream.