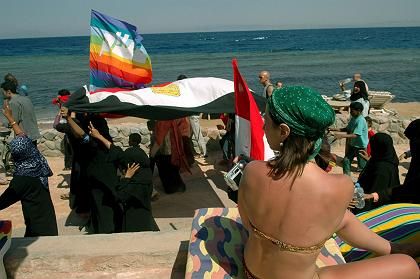 A tourist watches Egyptians demonstrate against terrorism in Dahab on April 25, a day after three bombs killed 18 people there.

Vacationers had finally come back to the Sinai Peninsula. "We've had business again for two or three weeks," said Sadik Abu al-Dahab, who runs the Tobya Boutique Hotel in the Egyptian border town of Taba. "The Israelis, especially, have come back despite the warnings from their government." But the boom in tourism may be short-lived. After three bombs in Dahab killed at least 18 people and injured dozens more on April 25, business may sag again in diving and swimming spots along the Red Sea. Hotel manager Abu al-Dahab, at least, is counting on "a drastic retreat in bookings -- the whole area will be affected."

That's not just paranoia: Security experts from a number of governments have issued warnings against traveling to the Red Sea. "After this attack (in Dahab), they're already planning the next one," says Israeli Brigadier General Elkana Nar-Nof, an official in the prime minister's counterterrorism department. Vacation spots on the Red Sea coast make an ideal target because bombers have a chance to kill Western as well as Israeli tourists -- and hurt Egypt's pro-western government at the same time. Recently it was discovered that a terror group arrested in the Sinai mountains in connection with last summer's bombings at Sharm El-Sheikh had links with al-Qaida. 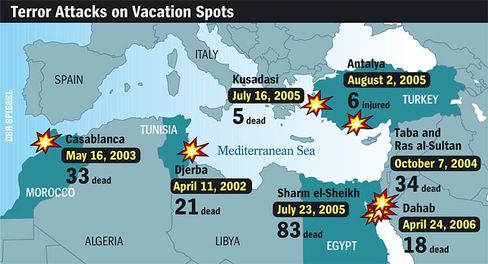 Keeping the peace in vacation spots all around the southern Mediterranean -- from Casablanca to Eilat -- will be harder this summer because of a "new quality" of terrorism, according to Mohammed Sajjid Said at the Al-Ahram Center for Political and Strategic Studies in Cairo. He said terrorism has become "harder to predict, harder to detect and less political." The new generation of suicide bombers, by and large, "aren't organized by a specific group," he said. More and more they operate in small one-or-two-man cells -- "inspired by the al-Qaida system," but independent and motivated by a simple urge to stoke fear. "With every successful operation, the motivation of copycat terrorists rises," says Mustafa Alani, security expert at the Gulf Research Center in Dubai. Attacks on tourist targets are "easy to carry out, cheap and unusually effective: They hit their own government's main (economic) artery and make big headlines in the West."

Egypt, Indonesia, and Maghreb Desert states in north Africa all have economies that rely heavily on tourism, which also makes them more vulnerable. Tourism in Turkey has also become a target -- and not just for Islamic radicals. Last week a splinter group from the separatist Kurdistan Workers' Party (PKK) called the Kurdistan Freedom Hawks announced that it would "balance the scales of terror." "We won't adhere to any rules," the group threatened, but no one is quite sure what distinguishes the Freedom Hawks from the PKK and other Kurdish independence groups. They were virtually unknown before an attack last July on the resort town of Cesme, on Turkey's Aegean coast, which injured about 20 people.