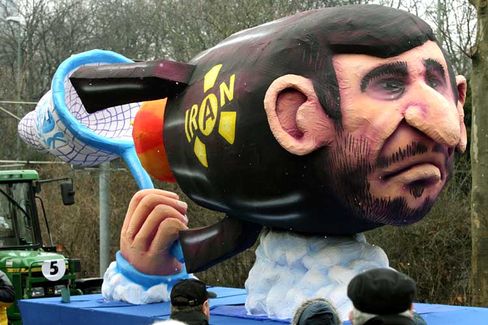 A little German humor from Carnival.

Dour. Unfunny. Serious. Such is the reputation of the German in much of the world. Walk down a wide, windy Berlin boulevard in winter and the myriad sour faces do little to contradict the stereotype: Germany as a nation of humorless robots that will show up to a meeting exactly on time, but who don't know a thing about comic timing.

Problem is though, it's simply not true. While not everyone in the country is quite as ready with a joke as Hans and Franz, nor as outlandish as Dieter, the German funny bone is quite well developed. Self-deprecation, irony, sarcasm, and a sharp wit are to be found in abundance -- and often you have to really be paying attention. Which is perhaps how the stereotype of the stony-faced Teuton got started. Much of German humor simply doesn't translate well.

Nor is it easy to pin down. Germany has almost as many different ways of making you laugh as there are different dialects in the country. What cracks up a jovial Bavarian might not even register with a cool urbanite from Hamburg and a joke may leave Wessies looking on blankly as Ossies collapse in laughter. But don't despair. To combat the stereotype of the joke challenged German -- and to help you understand your hosts' humor during your visit -- SPIEGEL ONLINE has come up with four more stereotypes of our own.

1. The Bavarian: Humor just north of the Alps tends to be anything but subtle. In-your-face slapstick abounds as do hearty belly laughs around the Biergarten table. But then, what would you expect of a state that seriously sells itself to the world with the motto "Laptops and Lederhosen" and is the home of the world's biggest drink-till-you-drop party Oktoberfest? The Bavarian could easily challenge your average Frenchman's awe for the comic genius of Jerry Lewis or The Three Stooges. When going for knee-slapping guffaws, just try to avoid replicating Chevy Chase's slap-happy Schuhplattler dance scene in "National Lampoon's European Vacation." But there is another level to Bavarian humor as well, and it tends to be heavily language-based. The more dialect you learn, the more appreciation you'll develop for the rich weirdness of Bavarians.

2. The Rhinelander: Germans from the Rhineland are crazy about Karneval. Each year, Cologne and many other cities shut down just to party for a week. Besides copious drinking, part of the fest is ritualized joke telling in massive halls. It's certainly not everybody's cup of tea, but they're even televised nationally. This long-standing tradition of joke telling is essentially an old school version of Germany's growing stand-up comedy scene. Comedy clubs are now becoming more common and there are plenty of people trying to make a living getting yuks on stage, even if the German language just doesn't seem to lend itself well to blistering, over-the-top monologues à la Chris Rock -- though viciously witty cabaret has a long tradition in Germany. But the Rhinelander loves a punch line, so dust off your best joke about the guy who walks into a bar with a parrot on his shoulder

3. The Berliner: Germany's capital is famous for its Schnauze -- literally "snout" -- which is essentially shorthand for its big city attitude. Always quick with a retort, the Berliner is very definitely not a stranger to sarcasm. But so long as you're not overly sensitive, the snarky comments can often be hilarious. Just be ready with your own quick cutdown. A true Berliner will respect getting taken down a peg as much as making fun of somebody else. Berliners are also famous for being highly disrespectful of pretty much everyone and every thing and most major buildings or monuments in Berlin have a less-than-flattering nickname. The House of World Cultures near the Reichstag is derisively referred to as the "pregnant oyster." The boxy chancellery with its huge circular feature on the side goes by "the chancellor's washing machine."

4. The Hamburger: No, we're not talking about Yankee fast food here. The Hamburger is synonymous with the clichéd assumptions about Germany's supposedly cool and calm northern residents. Don't expect the knee-slapping, belly laugh of the Bavarian -- it's all about understatement and irony up north. Deadpan delivery and witty banter are the way to tickle the Hamburger's funny bone. The undisputed master of this school of German humor is late night talk show host Harald Schmidt. He may readily admit his act was "inspired" by US counterpart David Letterman, but that hasn't kept him from being ranked as one of Germany's leading intellectuals in a recent survey by highbrow Cicero magazine.

And what about mentioning the war? It's true that World War II jokes will generally leave your average German cringing in embarrassment. But then, there are signs that the Nazis are slowly becoming targets of German sarcasm and wit as well. Pre-eminent German funny man Helge Schneider is playing Adolf Hitler in a new Chaplin-esque comedy -- "Mein Führer: The Truly Truest Truth About Adolf Hitler" -- soon to be released.

So keep your eyes peeled for these four case studies and you'll surely agree it's time for the German humor myth to be laughed out of existence. And time for Hans, Franz and Dieter to hit the big time.