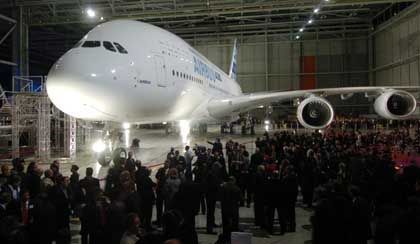 The birth of a giant: The A380 on Tuesday at the Airbus assembly plant in Blagnac, France, just after its official introduction.

Toulouse/Hamburg - Just a few minutes before noon on Tuesday, the 4,500 guests gathered at the French Airbus factory near Toulouse were given their first glimpse of the company's spectacular new super jumbo jet.

"Europe has written one of the most beautiful pages in its history today," said Airbus CEO Noel Forgeard. "Today we're No. 1 in the high technology sector."

Joining Forgeard in the festivities were airline managers from three continents, 500 journalists, along with German Chancellor Gerhard Schroeder, British Prime Minister Tony Blair, Spanish Prime Minister Jose Luis Zapatero and French President Jacques Chirac. The leaders represented the four countries that are producing the most important components for the A380 and, together, have extended credit lines totalling over 3.2 billion in order to start the project. 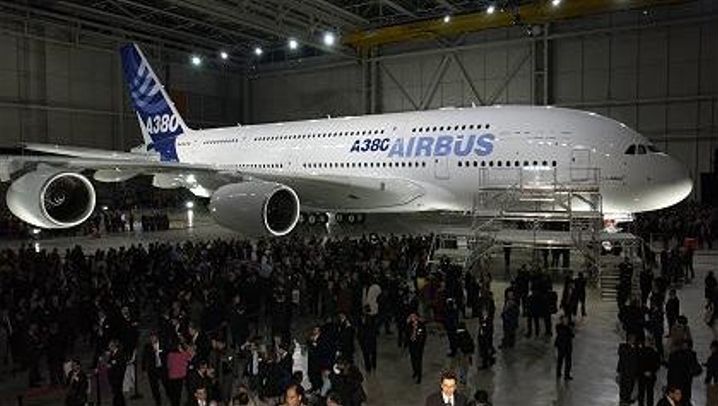 At 11:12 a.m., BBC TV host Alex Taylor launched the show in the four official Airbus languages: "Let the spectacle begin." A blue light then shined through the darkened hall and clouds of dry ice rolled over the stage. The guests were treated to "Flight Adventure," a show intended to illustrate humans' ages-old dreams of taking flight like a bird. Small models depicted windmills and airplanes and dancers filled the stage with accompanying choreography. A second, modern half of the show, projected images of the history of Airbus on giant monitors. Videos showed the CEOs of the 14 airlines that have already ordered the A380 discussing the advantages of the megaliner. 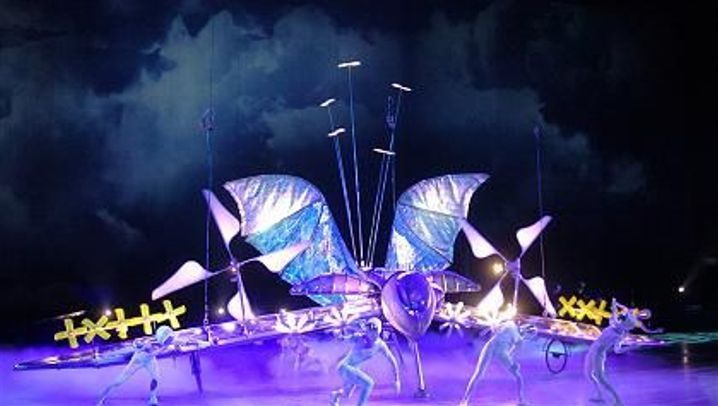 A380 Roll-Out Show in Toulouse: Einstein and Bach Fly with Airbus

Throughout, the day's star -- the very first A380, sporting a fresh coat of paint and an impressive 24 meters high, 73 meters long and with a tail-width of 80 meters -- remained hidden in the background.

The high point came one and a half hours into the show: The four statesmen, posing on steel scaffolding in front of the Airbus symbolically pushed a button christening the aircraft. With one touch, the A380 became visible under full light for the first time. Choir music filled the hall and the blitz of photographers' flash bulbs began. The company also unveiled its modern new logo on the plane's tail fin.

Chirac: A moment of pride

During speeches given before they took personal tours of the A380's interior, the leaders spoke of the importance of the project for European industry and unity. "The christening of the A380 is for all of us a moment of emotion and pride," French President Jacques Chirac said, describing the super jumbo as a "great success for Europe." He added that he hoped people would take that success and use it to help transform Europe into the world's "headquarters for technology."

In Britain alone, British Prime Minister Tony Blair said, in the long-term 100,000 jobs would be dependent on the A380 and 400 different companies would profit from it. The project could also help generate billions in export revenues for Europe. Blair also praised the environmental friendliness of the new aircraft, saying it would use 30 percent less fuel than comparable jets.

Schroeder: A triumph for old Europe 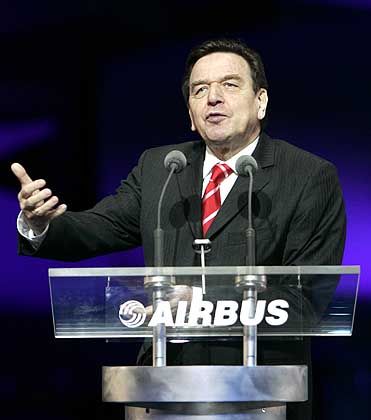 Gently playing off the American competition, Germany's Schroeder said the A380 example showed the advantages of "good old Europe." Traditions like cooperation, he said, fairness towards all employees of a company and social sensitivity had helped lead the company to success and major technological achievement. "Europe is still in a great position to set the tone of the future," he said.

At a press conference before Tuesday's presentation, Airbus said it was finalizing deals for the sales of additional aircraft -- so far the company has confirmed orders for 149 planes. Airbus's Forgeard confirmed Tuesday the company was close to a deal with China and that an order might be placed as soon as Easter. However, the CEO did not reveal which company might be interested in purchasing the planes.

Forgeard also said that the A380's maiden flight is now expected to take place at the beginning of April -- a slight delay from the March date that had circulated up until now. 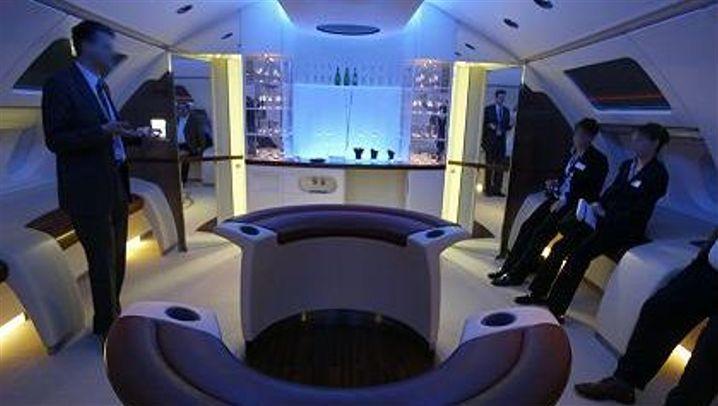 The New A380: Crossing the Skies in High Style: Making the Miles Fly By

Already, the company has orders on the books with a total value of $40 billion. Buyers are hoping the plane's cheaper maintenance and operating costs will help increase profit margins. And in an aviation sector that is still reeling from the effects of the Sept. 11, 2001 terrorist attacks, those savings could come in handy.

Airbus is hoping to further expand its market dominance against Boeing with the A380. The company first surpassed Boeing with airplane deliveries in 2003, but the A380 marks the first time that any aircraft manufacturer has offered competition against Boeing's 747 line, which has enjoyed a four-decade monopoly in the jumbo jet market. 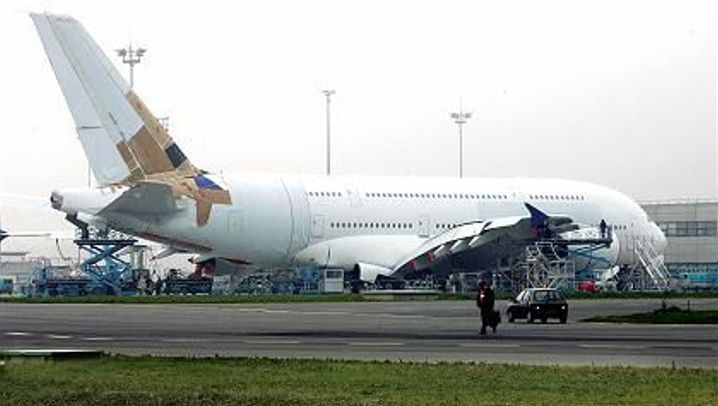 Bye, Bye, Jumbo Jet: The Next Flying Giant Will Come from Europe

Nevertheless, the A380 project hasn't been without its headaches for Airbus and its parent company, EADS. Airbus engineers fought up to the debut of the plane with its excess weight problems. The company had to increase its development efforts and went over budget by 1.45 billion. Additionally, a power struggle over the future management of EADS, which has traditionally had a dual chief executive structure with one CEO from Germany and one from France threatened to overshadow the introduction of the A380.

4 Bilder The A380 Unveiled: "Today We are No. 1"
4 Bilder A380 Roll-Out Show in Toulouse: Einstein and Bach Fly with Airbus
7 Bilder The New A380: Crossing the Skies in High Style: Making the Miles Fly By
5 Bilder Bye, Bye, Jumbo Jet: The Next Flying Giant Will Come from Europe