A Palestinian cartoonist proudly displays her drawings. The message? Jews were born to kill.

In the end, it was the image of the Prophet Muhammad wearing a bomb-shaped turban with a lit fuse that proved perhaps most offensive. After all, as the Web site of the Arab-European League -- a group supporting the rights of Arab and Muslim communities in Europe -- pointed out: "The issue for us is not about depicting the prophet or any other theological consideration. Its about stigmatizing a whole population of more than 1 billion Muslims through portraying their symbol as being a terrorist, megalomaniac, misogynic (sic) and a psychopath. This is racist, xenophobic and calling for hatred against Muslims."

That's a valid point. But it would have been a lot more forceful had the Web site not published a political cartoon a few days earlier depicting Anne Frank in bed with Adolf Hitler, who is looking amorously appeased. As if that wasn't offensive enough, the illustrator throws in one of the worst crimes in recent European history by name dropping Marc Dutroux, the convicted Belgian killer infamous for kidnapping young girls, raping them and then starving them to death. Hitler is saying, "Write this one in your diary Anne!"

In the Web site's defense, the cartoon -- labeled "Freedom of Speech Campaign: Hitler Goes Dutroux" -- is meant as a critique of Europe's recent love affair with freedom of the press even as certain topics remain taboo. But had the cartoon been printed in a Middle Eastern daily, it would hardly stand out. Virulent anti-Semitism, particularly in the form of political cartoons, makes an almost daily appearance in Arab newsprint. And not just since the Danish paper Jyllands-Posten printed 12 Muhammad cartoons last September.

"You find some of the most vicious and disgusting caricatures you can imagine in the Arab press," says Arieh Stav, author of "The Arabian Caricature: A Study of Anti-Semitic Imagery" and director of the Ariel Center for Policy Research in Shaarei Tikva, Isreal. "They are even worse than those published in Der Stürmer" -- the extraordinarily anti-Jewish Nazi party rag founded by Julius Streicher and published from 1923 until 1945. "Streicher embarrassed the Germans, but all over the Arab world you have these horrific images," Stav continues.

A quick glance at the Anti-Defamation League's Arab Media Review from July to December 2005 illustrates the point. A cartoon depicting the Jewish Star of David superimposed onto a swastika appeared in the Saudi Arabian paper Al-Yawm in late November. A December cartoon in Al-Bayan, a paper from United Arab Emirates, shows a grinning Jew playing with a globe-shaped yo-yo. The popular anti-Semitic stereotype that Jews control the United States, the United Nations, Denmark, Europe and the world are also favorite themes.

And that's before the Muhammad caricature scandal cranked up the volume of Muslim indignation. Since the beginning of February, there has been a tendency to conflate the appearance of the Muhammad caricatures in the Western media with Jewish perfidy. For example: a cartoon from Bahrain calling for a boycott against Danish products showed a Danish flag emblazoned with a Star of David sticking out of a chunk of havarti cheese. The cartoon's title? "The Penetration of Zionism to Denmark."

The tradition of political caricatures in the Arab world is not a long one, says Stav. A century ago, there were hardly any images at all -- which can largely be explained by Islam's traditional repudiation of physical images. The discomfort with depictions of people has since waned, although images of the Prophet Muhammad remain strictly verboten. A boom in political cartooning took place in the late 1940s, immediately after the 1948 Arab Israeli War, Stav says. The first drawings tended to be crude imitations of cartoons from the Nazi propaganda -- a Jewish octopus wrapping his tentacles around the globe, for example. But soon, they became more virulent.

"In the German caricatures," Stav says referring to the Der Stürmer cartoons, "you never saw what they wanted to do to the Jews. But in the Arab caricatures, they show exactly how they want to kill them, murder them and annihilate Israel."

Even as the Muslim world continues its calls for mass protests and boycotts of Danish products, Jew-bashing continues unabated in the Islamic press. Indeed, in perhaps the most insulting bit of cartoon combativeness, the Iranian paper Hamshahri at the beginning of the week launched a contest to find the 12 "best" Holocaust cartoons -- ostensibly to test Europe's commitment to freedom of speech by challenging editors here to republish them as they just as they did the Muhammad caricatures. 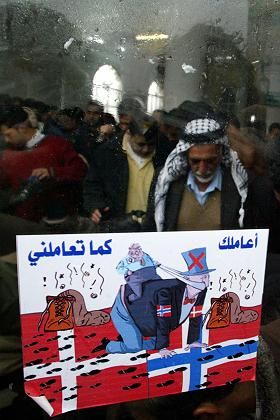 In this anti-Semitic cartoon, a star of David-wearing Ariel Sharon is shown steering Denmark and Norway.

"There is a problem and it has to be condemned," says Tariq Ramadan, a Muslim intellectual leader in Europe about the tendency for many in the Arab world to respond to any provocation from the West with anti-Semitism. "We have to realize that double standards cannot be allowed. ... I do think that we have to oppose the Israeli policy of attacking the Palestinians, but it is in no way acceptable to confuse this political stance with something which accepts and normalizes an anti-Semitic discourse."

But that's a fine line to walk. Israel is a favorite target of the Arab media and many in the region see the Jewish state as a thorn in the side of the Middle East. There is no shortage of cartoons depicting incapacitated Israeli Prime Minister Ariel Sharon with blood on his hands as he gleefully slaughters Palestinians -- a legitimate if graphic method of political protest. And there are a number of political cartoonists in the Arab world who refrain from any sort of anti-Semitism. But just as Germans open themselves up to charges of anti-Semitism as soon as they voice any critique of Israel, Arab cartoonists do the same when using the Star of David as shorthand for Israel.

A November cartoon in the major Egyptian daily al-Ahram -- a paper which officially "does not commission or support anti-Semitic material in our newspaper" according to a spokeswoman for the English version -- provides a concise illustration. It depicts the United Nations, in human form, hunched under the crushing weight of a number of UN resolutions passed against various Middle Eastern countries. On top of the pile sits a Jew wearing a Star of David hat holding a bloody axe. Although the Jew is unobtrusively labelled "Sharon," it is clearly meant to indicate Jewish domination of the UN and by extension -- especially given the globe-shaped head of the UN figure -- the world.

"I would agree" that a lot of cartoonists in the Arab world are anti-Semitic, Shujaat Ali, political cartoonist for Al-Jazeera.net said in an interview with SPIEGEL ONLINE. "We should respect people from other religions . We should have a code of ethics among cartoonists, and we need to ask ourselves how far it is acceptable for us to go."