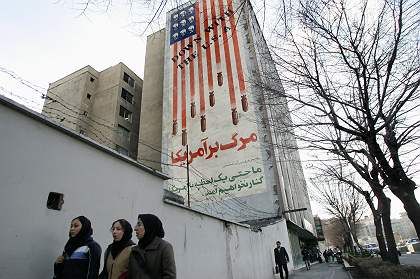 Iranians walk past an anti-US mural in downtown Tehran.

If the air strikes come, the bombs would fall without warning, dropped from fighter jets stationed in the Persian Gulf and from long-range bombers that would start their sorties in Britain. Their targets: Iranian research reactors in Tehran, nuclear facilities in Isfahan, Natanz, Arak and Bushehr. Research-related facilities at Iranian universities would also likely fall under the sights. The result of a four to five day series of air strikes would likely be thousands of dead Iranian soldiers, hundreds of dead civilians.

"A diplomatic solution to the profound differences between Washington and Tehran is still possible, but is becoming less likely," Rogers states in the report's introduction. Rogers's seeming resignation is telling: Oxford Research Group's mission is to provide violence-free prescriptions for conflict resolution, and Rogers is by no means a hawk.

Rogers's scenario does not provide any kind of time frame for when air strikes could unfold, but his report does come in the midst of a global debate about how to deal with a mullah-ruled state that so far hasn't been able to assuage concerns that its civilian nuclear energy program is actually a cover for a clandestine plan to build a nuclear weapon. With the Iranian regime under President Mahmoud Ahmadinejad so far showing limited willingness to compromise, discussions of the possibility of a military strike against Tehran are gaining in conversational currency. With his report, Rogers is the first to deliver a serious and scientific estimate of the potentially catastrophic consequences of a strike.

The goal of a military strike, Rogers says, would be to be to push back Iran's nuclear program by "at least five years." The scholar believes that either the United States or a second possible attacker, Israel for example, would have the capability to "severely damage Iranian nuclear and missile programs." Nevertheless, he concludes, "Iran would have many methods of responding in the months and years that followed." His analysis: An air strike, no matter how successful it might appear at first, could dramatically increase instability in an already unstable region.

Rogers believes Iran would retaliate in two indirect ways that would nonetheless hit the United States and its allies. Tehran might encourage the Iran-financed Hezbollah in southern Lebanon to launch missile attacks on northern Israel. It could also increase its support to insurgents in Iraq, helping to further undermine stability in that country. Even more important, Rogers warns, an attack against the country would likely lead to strengthened national unity in Iran and lead the country to put all of its energy into restoring the nuclear program. "Any hope of negotiating away Iran's suspected nuclear weapons program in the years after a US attack would vanish, undermining global non-proliferation efforts," he writes. "Rather than living with an Iran that had the potential to produce nuclear weapons, the US action would almost certainly guarantee an overtly nuclear-armed Iran for decades to come or, alternatively, further instances of military action." In other words, a sustainable success is unlikely -- instead a lasting conflict is expected if other countries are unwilling to accept Iran as a nuclear power.

The day after D-Day

The common argument for opponents of a military strike is that success cannot be guaranteed because there are too many facilities that need to be destroyed and they are too well protected. Iran, after all, learned from the Israeli air strike on Iraq's Osiraq nuclear reactor in 1981 that such an attack could set a country's nuclear weapons program back by years. Its suspected nuclear program is spread across so many facilities, that even the most knowledgeable Iran security experts are uncertain of the scope of it.

In an editorial in the Wall Street Journal last week, Edward Luttwak of the Washington-based Center for Strategic & International Studies sought to disarm that line of argumentation. "Iran might need 100 buildings in good working order to make its bomb," he wrote, "but it is enough to demolish a few critical installations to delay its program for years -- and perhaps longer."

Instead of addressing these arguments, which have so far dominated the debate over what actions should be taken against Iraq, Rogers looks to the day after D-Day, as it were. According to Rogers, an attack against Iran would further fuel anti-American sentiment in the region -- and in the mid-term it could assist extremist groups like al-Qaida. If the US does attack, he predicts it will spark a new wave of suicide bombings. A "protracted and highly unstable conflict" would be "virtually certain," Rogers predicts. "This would lead to further military action against Iran, establishing a highly dangerous cycle of violence."

That makes it all the more troubling that the study's author considers the risk of an armed conflict with Iran actually taking place to be extremely high. In his short, stringent analysis of the three main countries involved in the diplomatic conflict -- the US, Israel and Iran -- he sees little opportunity for a de-escalation.

For Washington, Rogers writes, "it is fundamentally unacceptable to the United States for a 'rogue' state such as Iran to be allowed to get even remotely near having its own nuclear capability. Such a 'deterrent' would greatly limit US options in the region, and would provide a threat to its closest ally -- Israel." At the same time, Israel "regards it as essential to its security that it is the only state in the region with a nuclear capability." On the other side, Iran, which is surrounded by countries with US military bases, also sees itself threatened. A nuclear bomb, of course, would make for a strong deterrent.

"A military response to the current crisis in relations with Iran is a particularly dangerous option and should not be considered further," Rogers concludes in the report, "alternative approaches must be sought, however difficult these may be."

The analysis may be bleak and the demand for alternative approaches naive, but Paul Rogers' research has proved prescient in the past. In a November 2002 report, "Iraq: Consequences of War," Rogers predicted the current situation in Baghdad, where al-Qaida and other terror groups have made establishing peace extremely difficult.

"The United States has sufficient forces to ensure regime destruction, but the regime's replacement by occupying forces or by a client regime," the 2002 report read, "... should be expected to increase regional opposition to the US presence. It is likely, in particular, to increase support for organizations such as al-Qaida and to prove counter productive to peace and security in the region."