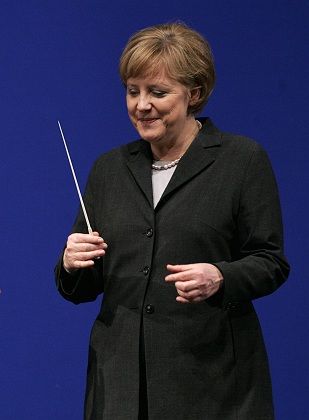 For now, German Chancellor Angela Merkel remains silent on the European Union stage. On Thursday afternoon, she arrived in Brussels for the EU summit -- the last major event to take place while Finland still holds the rotating EU presidency. A smile was all she had for the cameras directed at her. It was left to Finnish Premier Matti Vanhanen to talk about Germany's upcoming presidency. He wished his successor the best of success.

The summit offers Merkel a taste of what lies ahead for her, beginning on Jan. 1: the responsibility, which she will bear for half a year, of "speaking for 500 million people," as the leader of the conservative faction of the EU parliament, Hans-Gert Pöttering, recently put it.

The expectations for the Germans are high -- despite the best efforts of Merkel and Foreign Minister Frank-Walter Steinmeier to dampen them. After the French and Dutch rejections of the EU constitution during referenda held in the spring of 2005, the EU chose to grant itself a period of reflection. With Germany's presidency, however, that period is coming to an end. The controversial constitution has been lying on the shelf for a year and a half now, and Merkel has said she wants to bring it back to life. EU Commission President Jose Manuel Barroso upped the pressure once more on Thursday evening, pointing out before dinner that significant progress is required.

Prior to her departure, Merkel told the German parliament, the Bundestag, that she was aware of her responsibility. Focusing on Europe, she said it would be a "historical failure" were Europeans unable to "deal with the substance of the European constitution in such away that we can deliver real results prior to the next European elections." Merkel's mission is to provide a roadmap for that project during the six months of her presidency. The next European elections are in 2009.

A consensus on immigration

The current summit in Brussels is a nice warm-up for Merkel. In contrast to her inaugural appearance in Brussels one year ago, when the EU budget was hammered out in gruelling late night meetings, this week's meeting has been remarkably dispute-free. Thursday's harmonious opening dinner set the tone.

There have also been important breakthroughs at the negotiating table. The 25-government leaders, for example, reached an agreement on immigration policy -- a consensus which will be reflected in Friday's summit statement. Leaders hope that Europe can find ways to solve the refugee tragedy played out almost every day on Europe's southern underbelly.

The goal is to make immigration an aspect of EU foreign policy. Brussels hopes to establish partnerships with states from which many of the immigrants come, to encourage only those who have skills that the EU needs to come. The bloc also hopes to make it easier for temporary "guest workers" to stay -- though ultimately, the document stresses, it will be up to individual member states.

Still, Barroso is hopeful. "The program," he says, "will save lives."

EU enlargement is another important issue discussed at the summit. And as recently as Monday, it looked as though it would dominate the meeting. But then a meeting of EU foreign ministers chose to partially freeze accession negotiations with Turkey -- as a response to Ankara's continued refusal to recognize EU-member Cyprus. This resulted in a relaxed exchange of ideas on expansion at Thursday night's dinner -- rather than a war of words.

When Merkel arrived in Brussels she was visibly relieved that this potential sticking point had been resolved. It saves her trouble back in Berlin, where the question of Turkey's EU membership continues to divide the members of Germany's governing coalition.

Differences of opinion on expansion, of course, remain. A number of countries in the Balkans are knocking at the EU door and there are two schools of thought as to what to do about it. On the one hand, countries like France, Luxembourg, Germany and Austria would like to put the breaks on further expansion -- concerned as they are about the EU's ability to absorb new members.

On the other hand, countries like Britain, Sweden and Poland are in favor of more and more members. Other Eastern European member states -- which joined in 2004 -- likewise support the EU ambitions of their neighbors. But Merkel and Luxembourg Prime Minister Jean-Claude Juncker are concerned about the EU's ability to absorb still more members.

Joining the EU -- not as easy as it used to be

So too are a growing number of EU citizens. Only 45 percent of Europeans support future enlargement. EU leaders have decided that current candidates will have to clear higher hurdles than ever before -- much like Romania and Bulgaria, both of which are joining on Jan. 1.

"We understand the need to combine a strategic vision of enlargement  with our capacity to integrate, with the capacity of the EU to act, so that the EU is not weakened by further enlargement but strengthened," Barroso said.

The new approach to enlargement will particularly affect the EU aspirations of Turkey, especially given the ongoing difficulties with solving the Cyprus issue. The six Balkan states of Albania, Croatia, Macedonia, Bosnia, Montenegro and Serbia will also feel the pinch. The EU indicated that the door is open to them -- but now, Merkel is saying that there can be "no guarantee" of membership.

Still, the EU summit statement will say that the bloc intends to keep its promises. Croatia will probably be the next country to join, perhaps as early as 2009. But Juncker isn't the only one to emphasize that the EU should focus on its internal issues before admitting new member states.

Merkel has long been saying she wants to "re-found" the EU during her presidency. She feels that the immediate benefits of membership must be made more visible to the average citizen. Devoting more attention to issues such as climate protection and energy helps achieve that.

And Merkel herself has worked hard to advertise the EU during a media campaign designed to prepare the public for Germany's upcoming EU presidency. Merkel participated in a panel on the EU on German public television on Wednesday. On Thursday she gave a speech in the Bundestag on Europe. She also pondered the question "What is Europe good for?" on a German television show.

But she never got into the details. The program for Germany's EU presidency won't be made public until next week. Merkel did try out her new role as model European in the Bundestag on Thursday. While only a few parliamentarians followed the two-hour debate on Europe in the assembly hall, Merkel stayed until the very end. The least she can do to show her respect for 500 million Europeans.