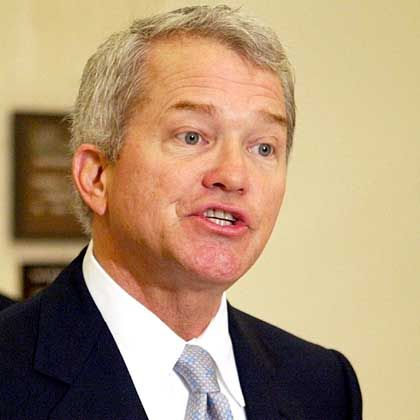 A furor over Mark Foley's flirtation with a young male page has wrong-footed US Republicans.

They just call it "the list." It supposedly bears the names of two dozen gay and lesbian Republicans -- including a female Senator, four members of Congress, nine chiefs of staff, and two White House advisors. This "velvet mafia," say inside sources, helped cover up former US Congressman Mark Foley's appetite for underage congressional pages -- in order to protect one of their own.

The scandal over Foley's salacious and highly inappropriate e-mails and instant messages with teenage boys has turned into a witch hunt for gays within the Republican Party. Denunciations, outings, and the general inflaming of stereotypes have become the order of the day in Washington, where homosexual officials and politicians tend to stay closeted for fear of public repercussions. A blog yesterday posted "the list," and even CNN has nonchalantly outed two congressional workers. The Nation's David Corn, who first mentioned it on his Web site, has raised fears of a "right-wing lynch mob."

In a US election, anything goes, apparently -- especially now, four weeks before mid-term elections, with the Republicans facing possible catastrophe and the Democrats hoping to retake the majority in at least one house of the legislature. The balance tipped quickly: Someone leaked incriminating e-mails and instant messages to the press, Mark Foley stepped down, and the party that likes to sell itself as the bastian of decency and family values has been under suspicion ever since of covering up for Foley -- for years -- while he made passes at teenage boys.

The scandal may sink the Republican Party. If the election were held today, a Gallop poll estimates, 59 percent of Americans would vote for a Democrat and only 36 for a Republican. An atmosphere of every-man-for-himself has taken over and led, apparently, to a gay witch hunt. Some say the targets implied by "the list" was instigated by Democrats, to split the Republicans; others say conservative Republicans started it to win back the Christian right.

Either way, the Grand Old Party has started to sink in panic, and every action taken now is just to save individual careers. Time has even declared "the end of the Republican revolution," and its ideals: " Every revolution begins with the power of an idea and ends when clinging to power is the only idea left."

The Republican president -- who tried to help his re-election bid in 2004 by supporting a constitutional admendment against gay marriage -- has watched his popularity wallow near record lows. Almost 80 percent of all Americans know about the Foley scandal. Two thirds believe there was a Republican cover-up. Other polls suggest that churchgoers and mothers, above all, are turning away from Republican candidates. Which puts Democrats on unfamiliar ground; suddenly they need to serve as the party of security and family values.

"What gay people do"

A lot can change in four weeks, of course. The Republicans have been declared dead more than once. The National Republican Congressional Committee (NRCC) has already sunk $7.8 million into this election to support its 30 most vulnerable members in the House of Representatives. The money went for TV commercials, mass mailings, and personal phone calls to voters.

Some Republicans are pulling no punches. The conservative TV preacher Pat Robertson suggested talking points to Republican leaders to distance the party from the Foley scandal: "The best thing they could do would be to say 'Well, this mans gay; he does what gay people do.'" Congressman Chris Cannon seconded that: "You don't need gaydar to understand that he has certain proclivities."

"Shameful," is how Patrick Sammon, vice-president of the Log Cabin Republicans, a group of homosexual party members, described the strategy of in-house reputation-cleansing. Newsweek columnist Eleanor Clift protested: "What Foley did was not about being gay but about abusing his power over young students -- and it was compounded by the actions of his colleagues whose silence made them complicit."

But the tactics pull with the conservative base of the party: The New York Times reported about a Christian rock concert in northern Virginia where fans happily blamed the Foley scandal on "Foley's lifestyle."

Other conservatives have tried to turn the victims into perpetrators. James Dobson, founder of a lobby group called "Focus on the Family" called Foley's instant-message correspondence "a kind of joke" by the congressional pages. Columnist David Henninger spoke of a "trap," and political Web maven Matt Drudge wrote of "beasts," who "tricked" Mark Foley.

Dennis Hastert, who still has to worry about his job as Speaker of the House of Representatives, sees guilty people everywhere except within the party leadership, which has known about Foley's "proclivities" perhaps since 2000, thanks to a tip from Jim Kolbe, the one openly gay Republican member of Congress. "The people who want to see this thing blow up," Hastert countered angrily, "are ABC News and a lot of Democratic operatives, people funded by George Soros."

A cloud over the GOP

How this will play out at the polls still isn't clear. The "Congressional Quarterly" revised its prognosis for the November election after the "Foley fallout" by 10 seats in the House of Representatives and one seat in the Senate -- in favor of the Democrats. Among other changes were Foley's district in Florida, which shifted "overnight" to his opponent, and Representative Tom Reynolds' district, in New York, because Reynolds knew about the e-mails.

This explains why other candidate are distancing themselves from the Foley affair any way they can. Congressman Ron Lewis, who had invited Hastert to a fundraising dinner this week in Kentucky, has retracted the invitation -- because of this "cloud over our leadership." Congressman Mike Sodrel in Indiana has also abandoned a public appearance with Hastert, and Hastert himself has cancelled other appointments.

Except one: A gala dinner for two Republican members of Congress in Chicago on Thursday, at $1,000 per head, will feature a speech by George W. Bush, who may have to share the spotlight in a way that appeals to exactly no one. "We see this as a Bush event, not a Hastert event," one of the organizers said, to conservative columnist Robert Novak.

Even Tom Reynolds, under pressure because of his long knowledge of the Foley e-mails, has made himself scarce -- he cancelled an appearance on an ABC talk show because of "flu-like symptoms" -- and an end to the drama is nowhere in sight. A House ethics committee investigating the scandal has already issued subpoenas to 44 witnesses, including some people on "the list."