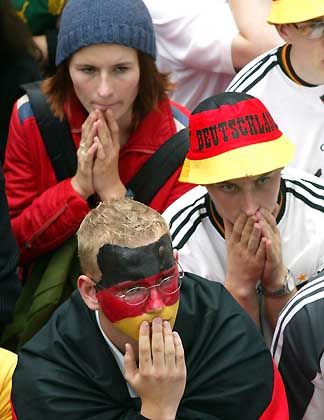 Germany is convinced that it's national football team, and everything else in the country, is terrible.

I have been living in the US for about seven years now, and if there's one thing I dread when I go home to visit Germany, it's the complaining. I had never realized how much Germans love to complain until I moved away.

The complaints range from the small, which are occasionally understandable, to the large, which tend never to make any real sense at all. If you go to Germany you will definitely be subjected to hours and hours of complaints, especially if you dare to disagree. And let the normally on-time trains be just a few minutes late and you'll hear a chorus of smug comments about how terrible the German train system is. If it's on time, they'll complain about the food, the seating, the crowds, the loud children, the air, the conductors -- even the noise in what are very likely the quietest trains in the world.

The most popular complaint is that everything in Germany is simply going downhill -- everything is getting worse and worse. It's the worst national soccer team in living memory (never mind that they said the same thing in 2002 and the German team landed in the final). The country is in utter disrepair. Taxes are too high. Politicians are too incompetent and too complacent. The list goes on and on.

And let's be honest: a certain amount of complaining would be understandable, even acceptable, if Germans had any real reason to complain. But for the most part, they don't. Unlike in the US, there aren't giant potholes in the streets, public transportation exists and is generally extremely reliable, everybody has health insurance, people have four to eight weeks of paid vacation, and politicians aren't any more incompetent than anywhere else.

Interestingly, though, if you bring this to a German's attention, they'll immediately agree that they complain too much. And then will defend their point of view. They'll start telling you why they see everything so negatively. There's no convincing them otherwise.

For visitors, this national pastime can be strange, because it makes it seem like there are two Germanies: There's the positive, clean, efficient, functioning country that visitors see -- and there's this incredibly awful place the locals live in -- with no real overlap between the two of them. So when you go to visit Germany, don't even try to understand what Germans are complaining about. Just listen, nod, and order yourself another delicious beer.