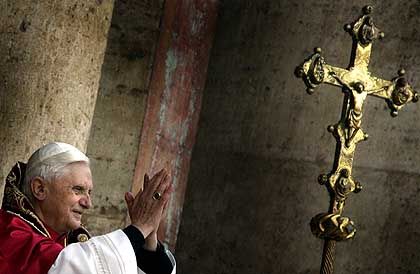 The newly elected Pope Benedict XVI, known as German Cardinal Joseph Ratzinger, blesses thousands of pilgrims from the balcony of St. Peter's Basilica at the Vatican.

For weeks now, Cardinal Joseph Ratzinger's name has been dropped as a front-runner to succeed Pope John Paul II. Yet when the news was announced on Tuesday night, it still arrived with the force of a surprise -- and sent thousands across Germany into enthusiastic celebration. As Pope Benedict XVI, Ratzinger has become the first German pope since Hadrian VI led the Catholic Church from 1522 to 1523.

Though he long served as a close confident and theological soul-mate to John Paul II, and was respected in Germany as a major religious figure in his own right, Ratzinger has also been a lightning rod for controversy here. Anti-Catholic sentiment is not uncommon in a country where large portions of the population split from the Catholic Church to follow the Protestant teachings of Martin Luther. And even among the country's millions of Catholics, Ratzinger's conservative, traditionalist positions have long been viewed with reservation. He has proven unwilling to compromise on Catholic policies against the ordination of women, he preaches strict sexual morals -- including the church's anti-homosexuality stance and its demand that priests remain celibate -- and he opposes any loosening of the church's staunch opposition to abortion.

Nevertheless, Tuesday was a day of celebration in Germany. Chancellor Gerhard Schroeder said in Berlin that Ratzinger's election to the pontificate was a "huge honor" for his country. Ratzinger, he said, is a theologian of great standing, appreciated around the world, who will be a worthy successor to Pope John Paul II. Schroeder officially congratulated Pope Benedict XVI in the name of the government and the people of Germany. 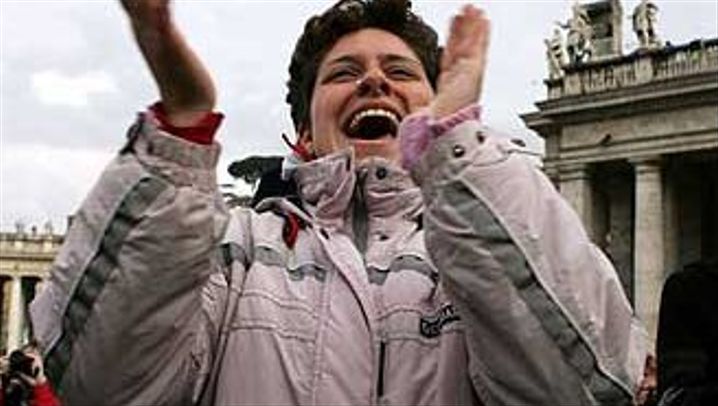 "It is an honor that a German has been elected as pope; it is a moment of pride," said Angela Merkel, the leader of the opposition Christian Democratic Union and Germany's most-powerful female politician, who described Ratzinger's selection as an "historical" moment.

In Ratzinger's hometown of Marktl am Inn, people took to the streets in celebration. The town's mayor, Hubert Gschwendtner, told the media: "We Marktlers are proud to have produced someone like (Ratzinger) and to be able to be honored by the fact that he has now become the globally recognized leader of the Catholic Church."

Ratzinger's staunch hard-line positions, however, have proven unpopular with many Germans. A poll taken by DER SPIEGEL earlier this month found that 36 percent of Germans outright opposed the selection of Ratzinger as pope compared to 29 percent who supported him.

He gave a hint of the direction he would take as a watchdog of the Catholic faith, protecting the church from contemporary trends, in the sermon he gave to open the papal conclave. "To have a clear faith, according to the creed of the church," he said, "is often labeled as fundamentalism." He went on to rail against the role the zeitgeist has played in modern religion. "How many winds of doctrine we have known in these last decades, how many ideological currents, how many fashions of thought? The small boat of thought of many Christians has often remained agitated by the waves, tossed from one extreme to the other: from Marxism to liberalism, to libertinism; from collectivism to radical individualism; from atheism to a vague religious mysticism; from agnosticism to syncretism."

It's no wonder, then, that in Germany some of Ratzinger's critics have been known to call him "God's Rottweiler." Albert Beisinger, a prominent theologian at the University of Tuebingen, warned Tuesday that Ratzinger's selection could lead to polarization within the church, as it will be perceived as a decision in favor of a sort of bench-warmer pope and against undertaking major reforms within the church. Lately, Ratzinger has expressed a willingness to undertake small reform steps, but the question is how big those changes will be.

Hans Kung, a respected German theologian and critic of Vatican policies whose license to teach was withdrawn by the Vatican in 1979 as a result of his criticisms against church policies, said he was "disappointed" by the decision. However, he compared it to an American presidential election and said people "should allow the pope 100 days to learn."

Around the world, many see in him as a pope who will protect the church, in the most positive sense, from being corrupted by the mainstream and the flow of contemporary ideas. His hard-line on the church doctrine also helped him to increase his support among Latin American cardinals in the conclave.

Critics can only hope Ratzinger's views and positions have been tempered by old age. The new pope himself reportedly recently admitted he had grown "milder and slower" with age. Some of that may also be the result of the German criticism that has been directed at his work for years -- he's definitley suffered from being made the bogeyman. "But you can't carry out big things without getting a thrubbing for it," he has acknowledged.

A fast-moving career in the church

Big things, indeed: A Vatican theologian once said that no German since Martin Luther has had as big an effect on the Catholic Church as Ratzinger. If that didn't apply to him when as he served as Prefect for the Congregation for the Doctrine of Faith, then it certainly will as he carries out his role as Pope Benedict XVI.

Ratzinger's career in the Church has been characterized by a fast and steep rise. Born in 1927 as the son of a policeman, he is said to have told Munich's Cardinal Faulhaber during a visit to his congregation: "I will one day become cardinal." The rest of his life, it seemed, was organized around this goal. He went on to study theology and philosophy at universities in the cities of Freising and Munich and became a priest in 1951. He later taught at the universities of Bonn, Muenster, Tuebingen and Regensburg, but left Tuebingen during the height of the student protest movement in 1968. In 1977, Pope Paul VI appointed him as archbishop of Munich and Freising, and soon after elevated him to the status of cardinal. 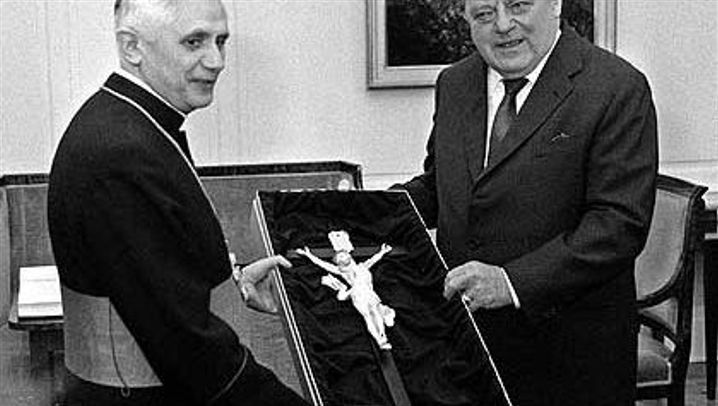 In 1981, the pope appointed Ratzinger as the leader of the Congregation for the Doctrine of Faith at the Vatican, making him the watchdog for Catholic orthodoxy.

The role also made him Pope John Paul II's right-hand man, and the two were known to meet every Friday for private discussions. Since 2002, he has served as the Dean of the Cardinal College and he led the conclave that ultimately selected him as pope. During the peak of Pope John Paul II's illness, Ratzinger stood in for him in giving the annual Easter service at St. Paul's Square last month. His reputation was also strengthened by the sermon he gave during John Paul II's funeral. Ratzinger, who has often been seen as a cold, calculating tactician, found heartfelt words for the pope and received enthusiastic applause from the millions who had converged on Rome to remember John Paul II.

The one certain thing about Pope Benedict XVI is that he will not remain on the Throne of Peter as long as his predecessor, John Paul II, who led a 26-year pontificate. In that sense, this will be the "interim papacy" expected by many Vatican observers, who said the Church wasn't ready for another "millennium pope" like John Paul II.

Ratzinger's reported health problems further suggest that his time as head of the Vatican City will be short. Citing poor health, Ratzinger sought to resign several times from his role as Prefect of the Congregation for the Doctrine of Faith before John Paul II died. "This life is very hard," he said then, as he sought to return to his home in Bavaria, where he wanted to spend the rest of his life writing books. That notion, of course, is all history now.