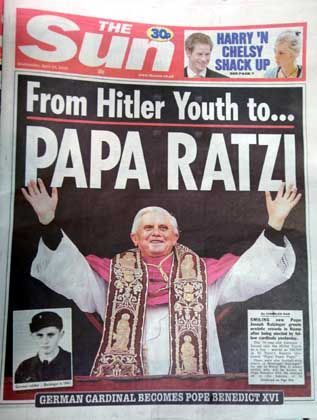 English tabloid "The Sun" offers up a biting headline that sums up the British reaction to a German pope.

Almost no English paper has missed the opportunity of running a photo of the new pope, Joseph Ratzinger, as he looked as a young boy in his Hitler Youth uniform. Taking a quick glance at a London newsstand on Wednesday, one has the impression that a sort of concerted battle readiness is in the works. In reality, the preparations have nothing to do with godliness and everything to do with power. Particularly the power of a German.

Normally, Brits have a pragmatic approach to religion. One should not forget that this is the place where just a few hundred short years ago a new church was founded because the king wanted to circumvent Catholicism's harsh stance on marriage and divorce.

Despite England's secularism, the truth is these days, Catholicism is all the rage. Turns out, parents are rushing to convert because they want to get their children into academically high powered Catholic schools. It's a terrifically calculated cost-benefit analysis that the most spiritually unmusical people on God's earth have set up.

But, on this particular day, British souls are seething. Not only is the church being taken seriously as an instrument of world power, but it is now to be headed by a German.

The papacy, the Daily Telegraph reminds its readers in central England, has great power. "Geopolitically it changed the face of the world, not least by bringing the soviet empire tumbling down." The paper's front page, however, takes a brutal swipe at the Vatican's latest choice. "God's Rottweiler is Pope," the headline glares.

Not to be outdone, the tabloid The Sun too, hits hard, offering up the headline "From Hitler Youth to Papa Ratzi." The paper thus kills two birds with one stone: it recalls another powerful German -- the one man who even today captivates the diabolical fantasies of Brits like no other -- and it makes the pope look ridiculous. Above the pope story, in a combination that is a perfect manifestation of the modern relativism Ratzinger is preaching against, the publishers place a photo of the young bad-boy Prince "Swastika" Harry.

The Daily Mirror clearly takes great delight in the optical mishmash of "Panzerkardinal," "Hitler Youth," and "Nazi Sympathizer" -- all on one full spread. It reports of a sort of Weimar inferno of Germany that the "TV stations swept their news agendas free of domestic rows over joblessness and crime" to report on the election. Naturally, the ugly German also trots through these pages as a "Rottweiler," and the victoriously-raised arms of the pope leave plenty of room open for other meanings and historical associations. With the exception of the Independent, hardly any British paper even mentions Ratzinger's theology. And even then, the paper leads with a Hilter Youth photo and spends five full pages bashing Ratzinger and delivering an unrelenting list of his sins. It characterizes Ratzinger's enthronement as an adroitly engineered Machiavellian coup in the style of the successors of the Kremlin. Ratzinger set the agenda of the conclave, he restricted contact with the press, and gave the deciding sermon -- a coldly calculated power-play by "the German." 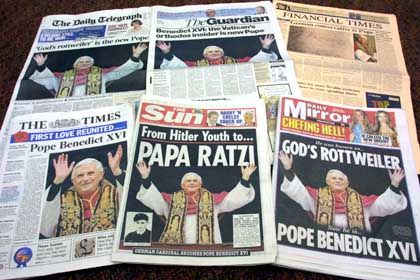 When Catholics heard the name "Josephum" pronounced in Latin from the balcony of St. Peter's Basilica, they were "hit by a sinking feeling in the pit of their stomachs," writes the paper, which generally doesn't take such an avid interest in religious issues. As if taking up the counter-offensive, the paper hammers back at Ratzinger for being chosen, listing all his failings.

Unfortunately, its arguments are built on shaky ground. When it comes to the Catholic Church's critique of capitalism, for example, the paper's leftist commentator seems completely lost. So he does what many other critics far removed from the church are doing these days: He portrays Ratzinger as a reactionary and then contrasts him with his Polish predecessor, Pope John Paul II, who suddenly is being portrayed as a leftist.

The paper writes that "Ratzinger moved to stamp out liberation theology, a trend in Catholic thought mainly in Latin America which mixed Catholic theology with Marxist analysis of capitalism. Where John Paul II, with his Polish background, had some sympathy with the movement and its critique of the cruelties of capitalism, the German theologian had none. He decided to stamp it out." Where did that come from? John Paul II never sympathized with Marxism. In fact, he sought to distance the Catholic Church from it. Did the paper conclude he had sympathy for Marxism merely because he so distrusted capitalism? Only someone who had been forced yesterday to read up on the issue could have misinterpreted it as badly as that.

Ratzinger, it alleges, "stamped out" liberation theology. But this tremolo of tears for a liberation theology destroyed by Rome is the last cry of a contemporary theory market. It is, of course, purely tactical and nothing other than a critical maneuver against the church. Barely 20 years after the last intellectuals agreed that Marxism was a bloody and totalitarian detour away from the Enlightenment, liberal commentators like those at the Independent have discovered a new sympathy for it. Largely this is because it has been condemned by Ratzinger and the Vatican.

Anyone familiar with the Sermon of the Mount knows that the church is neither able nor willing to engage in war to create paradise on Earth. Nevertheless, the church's priests and nuns -- who have little money of their own -- do more in the world every second to counter poverty and desperation than the editorialists at the Independent and other professional church critics.

Besides, the reality in Latin America is quite different from the way it is being reported. Latin American Catholic churches are in complete conformity with the Vatican. Their disappointment in the papal election has nothing to do with liberation theology or any other reformists. They're just agitated that one of their own matadors didn't win.

One fair critic in the bleak bunch

Out of the whole lot, the only paper to offer a fair assessment Ratzinger is the Times of London, whose commentator Daniel Johnson describes the papacy as the oldest and most successful institution in the world. He writes that it has developed its clout because it did not adhere to any zeitgeist. As such, Ratzinger is the "best man for the job."

Instead of seeking to instantly discredit Ratzinger with yellow journalism reminders of the pope's Third Reich youth in Germany, as other papers in Britain have done, a Times editorial offers a more nuanced portrayal of his childhood. It's not a dark burden, in his view, but an advantage. Ratzinger "began life under the Weimar Republic, which collapsed because it took moral relativism to extremes and succumbed to the secular ideologies of left and right."

"He grew up under the Third Reich witnessing first-hand the coercive and corrosive effects of a political religion," the paper writes. "Though his father was no Nazi, Joseph was obliged to join the Hitler Youth and was fortunate to avoid military service. Far from this experience being an obstacle to his elevation, it was this dark night of the soul that qualifies him for it." In short, the paper captures a clear truth: Ratzinger is destined to be the keeper and enunciator of the faith not despite his German biography, but also because of it.

Johnson also also shines a seldom seen critical spotlight on Hans Kung, a Swiss contemporary and arch-rival of Ratzinger, whose license to teach theology was stripped by the Vatican in 1979 over his criticisms of the church. If the Catholic Church has no intention of abolishing itself, you can hardly hold anything against it if it decides to withdraw the teaching license of one of its theologians who believes "all the great world religions essentially teach the same." That's "manifestly incompatible with Catholic doctrine," Johnson says. After all, every local bridge club has its own playing rules and, accordingly, excludes those who want to play by their own.

The Times-commentator then writes of a conversation he once had with Vatican critic Kung about Ratzinger. "I came away with the impression that of these two brilliant theologians, it was Kueng who had succumbed to the temptation to think he knew better, while Ratzinger had submitted to the authority of the church."