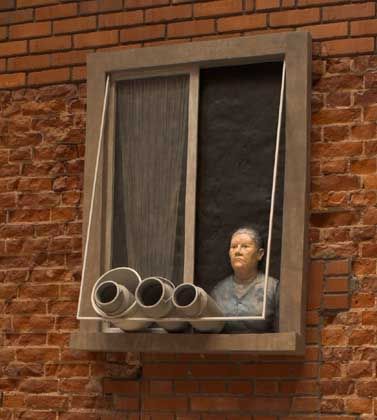 Scenario one: It's a normal day in Deutschland and you're out running errands -- taking out the garbage, parking your car, grabbing a couple of rolls at the bakery across the street, or whatever. Bottom line -- you're minding your own business. Suddenly, though, you get a strange feeling - an acute sense of being watched. You look around and there they are: a pair of eyes peering from a slightly parted, white lace curtain in the window of the first floor apartment in your building. One of your German neighbors is expressionlessly watching your every move.

Scenario two: You jump into the subway on your way to work in the morning and plop down in the nearest seat. Glancing up from the morning paper, you can't help but notice that the person across from you is staring at you for all he's worth. You break the gaze, but each time you look back, he's still staring. Is it a challenge? A come-on? Do you have food on your face? You look away, but cant help squirming.

Welcome to Germany, the land where a bit of intense eye contact is a daily occurrence -- so much so that many expats and visitors have dubbed it the Germanic Stare Down." But its actually two things: the first, a rather creepy kind of Big Brother-esque surveillance; the second, a glaring gaze that feels like an ocular challenge but is pretty harmless.

The first situation may hearken back to a strong sense of civic duty felt by German natives -- and is especially prevalent among the gray-haired citizens of Deutschland. (Younger people tend not to be so addicted to window scrutiny.) While most people from English-speaking countries tend to uphold only a personalized sense of said duty, many Germans will make sure that not only their own, but everyone elses space, is in perfect Ordnung. Walk against the red light in Munich, and prepare to be asked if you're color blind. Its also not unusual to hear of someone whos gotten an expensive parking ticket in the mail because an aged window-peeping German watched them pull into an illegal space, wrote down the license-plate number and called the police -- without, of course, ever having spoken to the perpetrator.

All this gawking does have a historical basis. A less-than-peaceful 20th century made Germans especially keen to know all they could about potentially dangerous - or endangered - neighbors. And under communism in East Germany, millions were reporting to the Staatssicherheit -- or Stasi -- on their neighbors' comings and goings.

These days, the totalitarian tinge has faded, but the gaze -- even in its "quick peek" variation -- is still a drag. Stumbling home drunk late at night, after all, should be a profoundly personal experience. Instead, you're likely to meet your neighbor in the stairwell the next day only to be greeted with: Late night last night, eh? You got home at 3:08 a.m. You smile through your painful hangover with your few functioning brain cells thinking: "Get a life!" But theres really not much you can do about it. Its a phenomenon that even Dresden-based sculptor Stefanie Bühler of Berlins hot DISKUS gallery has picked up on with her striking sculpture Die Nachbarin (The Neighbor), which depicts an older woman staring from a lace-curtained window with huge, unmoving eyes. Eerie.

And the subway scenario? It's really pretty innocuous albeit annoying. Perhaps German mothers don't do the "It's not polite to stare" routine with their kids. Or maybe the perpetrators have just never lived in New York, where prolonged eye contact can result in a messy homicide. But as boggling as the ogling can be, what can you do? The stare down tactic often works -- once you've made up your mind, you're bound to be able to make most Germans blink. Smiling and winking, on the other hand, might get you a date. Or, as a British friend once did, you can paste a huge smile on your face and ask, "Would you like to take a photograph?" Then it will be the German's turn to squirm.