Ayaan Hirsi Ali is in a surprisingly good mood for someone who has just lost her citizenship. "I have to step away for a bit," she says, "please wait for me and I'll be back in half an hour." Ayaan has an appointment with the US ambassador in The Hague. She's talking to her guests at a small party, who will just have to make do without her for a short while. "But make sure you come back with a passport!" writer Leon de Winter calls after her. 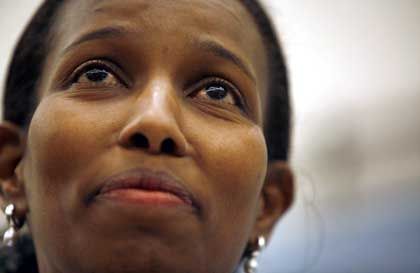 Ayaan Hirsi Ali, a symbol of resistance and civil courage, attends a press conference in The Hague.

Ayaan Hirsi Ali, who has represented the Party for Freedom and Democracy in the Dutch parliament since January 2003, has been a woman without a country for the past 24 hours. The Dutch Minister of Immigration and Integration, Rita Verdonk, withdrew Ayaan Hirsi Ali's citizenship because the native Somali lied on her 1997 application for Dutch citizenship. "This is a first in Dutch history," says Leon de Winter, with tears in his eyes, "the minister has what we call a 'discretionaire bevoegdheid' or discretionary powers, which means that although she had the power to do what she did, she wasn't required to do so."

"Iron Rita" takes matters into her own hands

The fact that Rita Verdonk and Ayaan Hirsi Ali are members of the same party had no impact on Verdonk's decision, nor was her move influenced by the fact that Ali is a rare political talent, even for the Netherlands: eloquent, multilingual and attractive. Not even the fact that Ali is a woman and represents several minorities at once -- immigrants, people of color, Muslims -- did her any good, especially with a minister who is nicknamed "iron Rita" and was a prison warden before becoming a member of the cabinet. "And now she believes that she can just continue applying the same practices she learned at the prison," complains Leon de Winter.

The case is indeed unprecedented and indicative of a major shift in public opinion in the Kingdom of the Netherlands. Ayaan Hirsi Ali came to the country in 1992 because, as she explains in a press conference, she "wanted to be in a position to shape my own future." She learned Dutch, studied political science at the University of Leiden and worked for a foundation affiliated with the Partij van de Arbeid, the country's social democratic party.

In early 2003, she entered parliament as a representative of the liberal "Party for Freedom and Democracy." In her new political role, she made a name for herself -- and many enemies -- as an outspoken critic of Islam.

After the murder of filmmaker Theo van Gogh, she was given round-the-clock bodyguard protection. Ali wrote the screenplay for a film, "Submission," which van Gogh directed. In a note they left behind at the scene of van Gogh's murder, his killers wrote that "she deserves death just as much as he does."

The incident turned Ayaan Hirsi Ali into a symbol of civil courage and active resistance, a black Joan of Arc named one of Time Magazine's 100 most influential people worldwide in 2005.

Lying was her only choice

Twelve months later, Ali stood before the assembled Dutch press at "Nieuwspoort" in The Hague and explained why she had lied on her citizenship application. "It was wrong and I'm not proud of it, but I had no other choice." She said that she had lied to prevent her family from tracking her down, although the name she assumed wasn't entirely foreign to her. "My grandfather's name was Ali," she says, which led her to assume the name Ayaan Hirsi Ali. But her real name was Ayaan Hirsi Magan. "My full name," she told the Dutch press, "is Ayaan Hirsi Magan Isse Guleid Ali Wai'ays Muhammad Ali Umar Osman Mahamud."

But now it's too late for clarification. Ayaan, speaking quietly, says that she plans to give up her seat in parliament, leave the Netherlands and continue her work elsewhere.

Dutch Finance Minister and Deputy Prime Minister Gerrit Zalm stands next to Ayaan. Like Ayaan and Rita Verdonk, Zalm is also a member of the Party for Freedom and Democracy. And he is extremely unhappy about his fellow party member's decision. "What surprises me most is the incredible speed with which the decision was made." If Verdonk's agency were to pursue applications for citizenship with the same level of enthusiasm, he says, "we would have fewer problems."

Zalm also stresses that the accusations now being leveled against MP Ayaan Hirsi Ali have long been known to the public, because she herself has been open about her history on many occasions.

The question remains as to why the matter took so long to become so explosive. The answer is as banal as it is surprising: because VARA, a television station with social democratic leanings, aired a 40-minute documentary last Thursday called "The Holy Ayaan." VARA's reporters had traveled all the way to Mogadishu in Somalia to obtain information they could just as easily have found on recordings of their own station's programs: that Ayaan Hirsi Ali had long since admitted that she lied when she applied for Dutch asylum.

"A disgrace for our country"

"This affair is a disgrace for our country and for all of Europe. Voltaire and Erasmus are turning over in their graves," says an outraged Afshin Ellian, Professor of Legal Philosophy at the University of Leiden. Ellian, born in Tehran in 1966, emigrated to the Netherlands in 1983. His history is similar to Ayaan's, except for the fact that he left his country because he was fleeing from the mullahs, and not because his family was trying to force him into an arranged marriage. Ellian is even considering filing legal action against "iron Rita" for perversion of justice, "not because she has now revoked Ayaan's citizenship, but because she has long known that Ayaan provided false information." Ellian knows that he's unlikely to make much headway with his argument, but he says he would certainly like to give it a try.

But it seems that Ayaan Hirsi Ali has already moved on. After an hour she returns to her guests and announces the good news. The US ambassador in The Hague, she says, has assured her "that he will do everything in his power to help me move to the United States." In fact, the Washington-based American Enterprise Institute, a conservative think tank, has already offered her a job.

Then she switches on the TV set. The parliament is currently debating her case, and each MP who takes to the podium has nothing but criticism for the immigration minister's approach, especially her "snelheid," or speed. The parliamentary leader of the Party for Freedom and Democracy, Willibrord van Beek, asks: "Why now? Why Ali? Why this way?" Geert Wilders, an independent MP, says: "This is a dark day for our democracy."