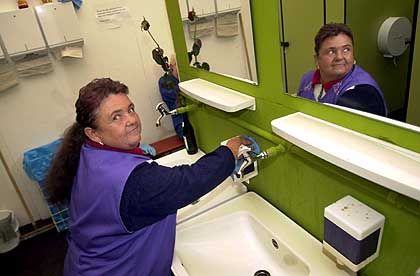 There's even a rap song named after the toilet attendant: "The Loneliness of the Klofrau."

If you plan on hitting the pub for pints with your friends in Germany, don't forget to bring along a pocketful of coins. Once you break the seal here, things can get expensive in a hurry.

Shaking the dew off the lily in Germany is often not free, and the first person you'll encounter as you follow the signs to the "WC" -- or toilet -- is the Klofrau. Who's she? The "toilet lady" of course -- or, should you wish to be a bit more politically correct, she also goes by "sanitary assistant". She's the one who keeps the powder room presentable, and she wants your small change.

For more than a century, the Klofrau has prowled the johns of restaurants, bars, rest stops and train stations -- especially in heavily touristed areas -- collecting coins in exchange for keeping the WC clean. In fact, public restrooms were among the very first facilities in Germany to be privatized when responsibility for their pristinity was handed over to toilet attendants during the 19th century. Armed with rubber gloves, scrub-brushes and industrial quantities of disinfectant, it's her duty to make sure the restroom stays spic and span.

What's the service worth? In most places, she will charge you 30 to 50 cents, but at train stations a trip to the loo can set you back by as much as €1 or more. After you've finished your business, the Klofrau will be waiting with a small ceramic plate sporting a few coins. But never too many.  The Klofrau doesn't want you to see just how lucrative her gig can actually be. A recent article in the German weekly Die Zeit claimed that a company could earn as much as €2,000 per week in a heavily trafficked bathroom at an Autobahn rest stop, and even double that serving the needs of desparate tourists during the high season.

But before you think of stiffing the Klofrau, remember that many of them are poorly paid immigrants doing jobs no one else wants and handing most of their coins on to large service companies. They only get to keep a fraction of a bathroom's earnings. Others are working under the table without any kind of social net. When you walk by, deposit your small change and give her a smile. Only have a €2 coin? Put it on the plate and take some change. And if you don't have any change at all? You won't land in jail for not paying the Klofrau, but you are likely to solicit grunts of displeasure.

On the upside, a Klofrau with passion for her job -- and yes, they do exist -- will provide you with a spotless, perfume-filled bathroom experience that will make you forget the bodily function that brought you there in the first place. Sadly, however, service standards in the Klofrau sector are wildly variable. And just because you've just paid a king's ransom for the privilege of relieving yourself, don't automatically expect a WC to have Ritz-Carlton standards.

Still, before you start bitching about having to cough up loose change for the Klofrau, just remember: this is the most-disparaged job there is in Germany and you should show this woman a little respect. Who wants to sit alone in a bathroom all day long as ungrateful guests begrudgingly hurl pocketchange their way? Besides, the Klofrau is an endangered species: The advent of the self-cleaning toilet has given Germany's army of Klofrauen some stiff competition. For the better part of two decades, the media has been warning of her death.