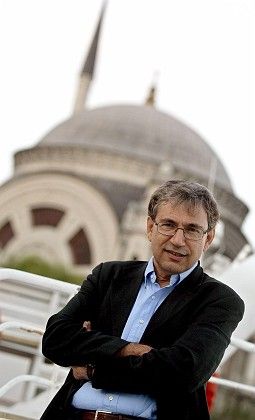 The top story on the Web site of Hürriyet, a Turkish tabloid and mouthpiece for millions of Turks, reads "Armenian Shadow over the Nobel Prize." In the publication's devastating assessment, Orhan Pamuk is merely an average novelist in the global scheme of things. According to Hürriyet, the author would not have been awarded the most prestigious prize in the world of literature if it weren't for his political statements on the mass killings of Armenians committed during World War I -- killings that many feel qualify for description as genocide. Even an Istanbul corner grocer, who probably hasn't read a single novel in his life, says: "A writer is awarded the Nobel Prize for his entire body of work. Orhan Pamuk is far too young for that."

From the ordinary man on the street to the country's well-known authors and literary critics, almost all agree that Pamuk was honored primarily because of his political views and his prosecution in Turkey. "Have you read his last novel, 'Snow,'" a user asks in a Turkish Internet forum, "not a good book -- not worthy of a Nobel Prize winner." The Turkish people, it appears, are not the least bit proud of the fact that one of their own has just been awarded the Nobel Prize for Literature.

The news itself hit Turkey like a bomb. The country is already immersed in the long-standing controversy surrounding Armenia and accusations of genocide. Turkey's five news channels have been broadcasting special reports on the genocide vote in Paris since the French parliament passed a bill making it a crime to deny the 1915 "genocide against the Armenians" in the Ottoman Empire on Thursday morning.

The Armenian genocide question has been hotly debated for years. Now that French lawmakers have signed the draft legislation, all it will take is approval in the Senate and President Jacques Chirac's signature for a new law to come into effect under which anyone who denies, on French soil, that the mass killings constitute genocide can be slapped with a €45,000 ($56,000) fine or jail time.

Walking across the corpses of fellow Turks?

Just as Turkish television station NTV's Paris correspondent was about to read the government's official response, a red-faced moderator interrupted him with the words: "An extremely important message! Orhan Pamuk has been awarded the Nobel Prize!" At that moment, everything changed in Turkey, as the country became divided into two disproportionate camps. On the one side are those who, "despite everything," are thrilled at the news, partly because they share the author's view. The other camp consists of millions of Turks who see themselves as being unjustly branded as a country of oppressors, especially by Pamuk's comments. For them, Pamuk is an opportunist who carefully planned his career and has now crowned it with the Nobel Prize -- walking across the "corpses of his fellow Turks" in the process.

One of his few supporters is political scientist Ahmet Insel, who is also Pamuk's publisher at Istanbul's prestigious Iletisim Publishing Company. "We congratulate him!" Insel proclaims enthusiastically, calling Pamuk one of the most important writers of the "modern novel" in Turkey. Insel sees no contradiction in the fact that Pamuk has become increasingly political in recent years. "Expressing one's political views is the natural right of every author," he says, adding that, after all, Pamuk received the award as a novelist and not as a politician. "It has always been his goal to write a universal novel in Turkish," says Insel.

Tugrul Eryilmaz, the features editor at the liberal publication Radikal also believes that Pamuk has earned the prize. Eryilmaz calls Pamuk a cosmopolitan man, "an occidental and an oriental at the same time," adding: "they couldn't have found a more deserving candidate." Other writers, like Zülfü Livaneli, are praising the Nobel Prize committee's decision, and not just to avoid being seen as envious of Pamuk's fame. Ahmet Ümit, a best-selling author of detective novels, says diplomatically: "In the past, the Europeans have paid closer attention to our political views than our writing." According to Kurdish writer Murathan Mungan, "Pamuk has spent many years working diligently and programmatically toward this goal," although he adds that one should not confuse the political dimension with the literary. "The prize honors Turkish literature as a whole."

Pamuk's furious opponents have been decidedly more direct in expressing their views. "Turkish literature is not being honored today," poet Özdemir Ince said at a poetry conference in Brussels. "Orhan Pamuk's name was originally at the bottom of the list of candidates." Ince's favorite was American writer John Updike. As a Turk, he isn't the least bit pleased over Pamuk's triumph. "Now everyone will say that even the great Nobel Prize winner Pamuk has recognized the genocide against the Armenians." In Ince's opinion, the moral authority that comes with winning a Nobel Prize would deal a devastating blow to any open discussion of the events that occurred in Anatolia, the part of modern-day Turkey that lies in southwest Asia, 90 years ago.

The long shadow of politics

The Turks are outraged over the fact that no one mentions their casualties in World War I. According to Onur Öymen, the deputy head of the country's Social Democrats and Turkey's former ambassador to Germany, the "Armenians fought on the side of the Russians in the war, attacked Turkish villages wearing Russian uniforms, and raped and murdered the innocent." Cezmi Ersöz, a well-known critic, agrees, saying: "No one mentions our victims! Is it absolutely necessary to put down an entire people to get the Nobel Prize?" He isn't referring to the Armenians, but rather to today's Turks, who he believes Pamuk has denigrated. Ahmet Tan, a leftist member of parliament and publicist, also sees a correlation between the genocide debate and the Nobel Prize. Tan believes that people in Turkey will "never be able to wholeheartedly embrace" this prize.

It seems deeply unfortunate that the long shadow of politics has darkened Orhan Pamuk's Nobel Prize. Or could it be that everything the author has said has been carefully planned? For decades, Pamuk lived in his ivory tower and refused to discuss politics with journalists. "I want to be recognized for my writing, not my political opinions," he said. Indeed, he even considered himself somewhat naïve when it came to politics.

His behavior has only changed in recent years. Despite a reputation for refusing political interviews, he was more than willing to share his opinions about Turkey's past with a Swiss newspaper two years ago. When the interviewer asked Pamuk why he is hated by so many Turks, he replied: "Because I am the only one willing to say that 1 million Armenians and 30,000 Kurds were murdered in Turkey!" Because of his comments, Pamuk was charged with the crime of "insulting Turkishness," although the government withdrew the charge during the first court hearing.

Pamuk kept a low profile for months, avoiding not only his adversaries but also the entire Turkish public -- and speaking only to the foreign press. When liberals and reformers criticized the author for his behavior, he appeared in an interview on CNN-Türk and said: "That wasn't what I meant. After all, I didn't say that Turks were the ones who killed those Armenians and Kurds." For many, Pamuk's words were proof positive that he was indeed an opportunist willing to play to his respective interviewers.

Pamuk was hounded by these accusations until the fall of 2006, when he was awarded the Peace Prize of the German Book Trade at St. Paul's Church in Frankfurt. Apparently Pamuk himself was troubled by the notion that his fame is not based solely on his writing. At some point, he must have realized that his political comments were more effective in boosting his public image than his works, which are not uncontroversial from a purely literary point of view.

Can Baydarol, a European Union lobbyist and proponent of liberal reforms, is now calling on Pamuk to chastise the French for seeking to muzzle the Turks for denying that the mass killings of Armenians constitute genocide. Pamuk, says Baydarol, ought to do something for the Turks.

For many Turks, the fact that Armenia has praised the decision to award Pamuk the Nobel Prize only proves their point and reinforces the notion that the author is nothing but an enthusiastic denigrator of his own country.

Pamuk, who plans to spend more time living in the United States in the future, has truly lost any strong connection he may have had to his own country. Indeed, the author himself believes that writers no longer write for readers in their native tongue, but for a "global audience" -- one that can no longer be pinpointed geographically but only intellectually. This only confirms his self-crafted image in Turkey: that of the lost son who finds himself out in the cold and no longer wants to return home.