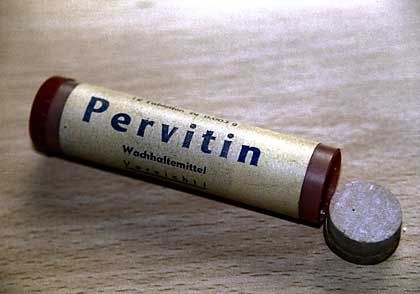 The stimulant Pervitin was delivered to the soldiers at the front.

In a letter dated November 9, 1939, to his "dear parents and siblings" back home in Cologne, a young soldier stationed in occupied Poland wrote: "It's tough out here, and I hope you'll understand if I'm only able to write to you once every two to four days soon. Today I'm writing you mainly to ask for some Pervitin ...; Love, Hein."

Pervitin, a stimulant commonly known as speed today, was the German army's -- the Wehrmacht's -- wonder drug.

On May 20, 1940, the 22-year-old soldier wrote to his family again: "Perhaps you could get me some more Pervitin so that I can have a backup supply?" And, in a letter sent from Bromberg on July 19, 1940, he wrote: "If at all possible, please send me some more Pervitin." The man who wrote these letters became a famous writer later in life. He was Heinrich Boell, and in 1972 he was the first German to be awarded the Nobel Prize for Literature in the post-war period.

Many of the Wehrmacht's soldiers were high on Pervitin when they went into battle, especially against Poland and France -- in a Blitzkrieg fueled by speed. The German military was supplied with millions of methamphetamine tablets during the first half of 1940. The drugs were part of a plan to help pilots, sailors and infantry troops become capable of superhuman performance. The military leadership liberally dispensed such stimulants, but also alcohol and opiates, as long as it believed drugging and intoxicating troops could help it achieve victory over the Allies. But the Nazis were less than diligent in monitoring side-effects like drug addiction and a decline in moral standards.

After it was first introduced into the market in 1938, Pervitin, a methamphetamine drug newly developed by the Berlin-based Temmler pharmaceutical company, quickly became a top seller among the German civilian population. According to a report in the Klinische Wochenschrift ("Clinical Weekly"), the supposed wonder drug was brought to the attention of Otto Ranke, a military doctor and director of the Institute for General and Defense Physiology at Berlin's Academy of Military Medicine. The effects of amphetamines are similar to those of the adrenaline produced by the body, triggering a heightened state of alert. In most people, the substance increases self-confidence, concentration and the willingness to take risks, while at the same time reducing sensitivity to pain, hunger and thirst, as well as reducing the need for sleep. In September 1939, Ranke tested the drug on 90 university students, and concluded that Pervitin could help the Wehrmacht win the war. At first Pervitin was tested on military drivers who participated in the invasion of Poland. Then, according to criminologist Wolf Kemper, it was "unscrupulously distributed to troops fighting at the front."

During the short period between April and July of 1940, more than 35 million tablets of Pervitin and Isophan (a slightly modified version produced by the Knoll pharmaceutical company) were shipped to the German army and air force. Some of the tablets, each containing three milligrams of active substance, were sent to the Wehrmacht's medical divisions under the code name OBM, and then distributed directly to the troops. A rush order could even be placed by telephone if a shipment was urgently needed. The packages were labeled "Stimulant," and the instructions recommended a dose of one to two tablets "only as needed, to maintain sleeplessness."

Even then, doctors were concerned about the fact that the regeneration phase after taking the drug was becoming increasingly long, and that the effect was gradually decreasing among frequent users. In isolated cases, users experienced health problems like excessive perspiration and circulatory disorders, and there were even a few deaths. Leonardo Conti, the German Reich's minister of health and an adherent of Adolf Hitler's belief in asceticism, attempted to restrict the use of the pill, but was only moderately successful, at least when it came to the Wehrmacht. Although Pervitin was classified as a restricted substance on July 1, 1941, under the Opium Law, ten million tablets were shipped to troops that same year.

Pervitin was generally viewed as a proven drug to be used when soldiers were likely to be subjected to extreme stress. A memorandum for navy medical officers stated the following: "Every medical officer must be aware that Pervitin is a highly differentiated and powerful stimulant, a tool that enables him, at any time, to actively and effectively help certain individuals within his range of influence achieve above-average performance."

The effects were seductive. In January 1942, a group of 500 German soldiers stationed on the eastern front and surrounded by the Red Army were attempting to escape. The temperature was minus 30 degrees Celsius. A military doctor assigned to the unit wrote in his report that at around midnight, six hours into their escape through snow that was waist-deep in places, "more and more soldiers were so exhausted that they were beginning to simply lie down in the snow." The group's commanding officers decided to give Pervitin to their troops. "After half an hour," the doctor wrote, "the men began spontaneously reporting that they felt better. They began marching in orderly fashion again, their spirits improved, and they became more alert." 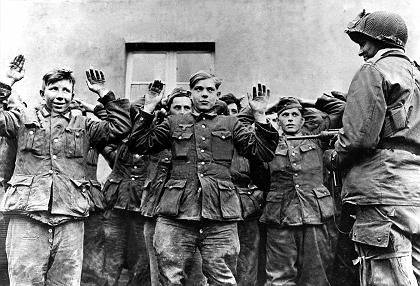 Towards the end of the war, Germany used younger and younger soldiers. More and more of them relied on drugs or alcohol for courage and endurance.

It took almost six months for the report to reach the military's senior medical command. But its response was merely to issue new guidelines and instructions for using Pervitin, including information about risks that barely differed from earlier instructions. The "Guidelines for Detecting and Combating Fatigue," issued June 18, 1942, were the same as they had always been: "Two tablets taken once eliminate the need to sleep for three to eight hours, and two doses of two tablets each are normally effective for 24 hours."

Toward the end of the war, the Nazis were even working on a miracle pill for their troops. In the northern German seaport of Kiel, on March 16, 1944, then Vice-Admiral Hellmuth Heye, who later became a member of parliament with the conservative Christian Democratic party and head of the German parliament's defense committee, requested a drug "that can keep soldiers ready for battle when they are asked to continue fighting beyond a period considered normal, while at the same time boosting their self-esteem."

A short time later, Kiel pharmacologist Gerhard Orzechowski presented Heye with a pill code-named D-IX. It contained five milligrams of cocaine, three milligrams of Pervitin and five milligrams of Eukodal (a morphine-based painkiller). Nowadays, a drug dealer caught with this potent a drug would be sent to prison. At the time, however, the drug was tested on crew members working on the navy's smallest submarines, known as the "Seal" and the "Beaver."

Alcohol, the people's drug, was also popular in the Wehrmacht. Referring to alcohol, Walter Kittel, a general in the medical corps, wrote that "only a fanatic would refuse to give a soldier something that can help him relax and enjoy life after he has faced the horrors of battle, or would reprimand him for enjoying a friendly drink or two with his comrades." Officers would distribute alcohol to their troops as a reward, and schnapps was routinely sold in military commissaries, a policy that also had the happy side effect of returning soldiers' pay to the military.

"The military command turned a blind eye to alcohol consumption, as long as it didn't lead to public drunkenness among the troops," says Freiburg historian Peter Steinkamp, an expert on drug abuse in the Wehrmacht.

But in July 1940, after France was defeated, Hitler issued the following order: "I expect that members of the Wehrmacht who allow themselves to be tempted to engage in criminal acts as a result of alcohol abuse will be severely punished." Serious offenders could even expect "a humiliating death." 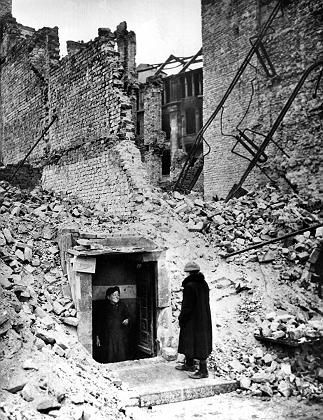 Drugs were also a problem on the home front, but the Nazis tried harder to control their abuse.

But the temptations of liquor were apparently more powerful that the Fuehrer's threats. Only a year later, the commander-in-chief of the German military, General Walther von Brauchitsch, concluded that his troops were committing "the most serious infractions" of morality and discipline, and that the culprit was "alcohol abuse." Among the adverse effects of alcohol abuse he cited were fights, accidents, mistreatment of subordinates, violence against superior officers and "crimes involving unnatural sexual acts." The general believed that alcohol was jeopardizing "discipline within the military."

According to an internal statistic compiled by the chief of the medical corps, 705 military deaths between September 1939 and April 1944 could be linked directly to alcohol. The unofficial figure was probably much higher, because traffic accidents, accidents involving weapons and suicides were frequently caused by alcohol use. Medical officers were instructed to admit alcoholics and drug addicts to treatment facilities. According to an order issued by the medical service, this solution had "the advantage that it could be extended indefinitely." Once incarcerated in these facilities, addicts were evaluated under the provisions of the "Law for Prevention of Offspring with Hereditary Diseases," and could even be subjected to forced sterilization and euthanasia.

The number of cases in which soldiers became blind or even died after consuming methyl alcohol began to increase. From 1939 on, the University of Berlin's Institute of Forensic Medicine consistently listed methyl alcohol as the leading factor in deaths resulting from the inadvertent ingestion of poisons.

The execution of a 36-year-old officer in Norway in the fall of 1942 was intended to set an example. The officer, who was a driver, had sold five liters of methyl alcohol, which he claimed was 98 percent alcohol and could be used to produce liquor, to an infantry regiment's anti-tank defense unit. Several soldiers fell ill, and two died. The man, deemed an "enemy of the people," was executed by a firing squad. According to the daily order issued on October 2, 1942, "the punishment shall be announced to the troops and auxiliary units, and it shall be used as a tool for repeated and insistent admonishment."

But soldiers apparently felt that anything that could help them escape the horrors of war was justifiable. Despite general knowledge of the risks involved, morphine addiction became widespread among the wounded and medical personnel during the course of the war. Four times as many military doctors were addicted to morphine by 1945 than at the beginning of the war.

Franz Wertheim, a medical officer who was sent to a small village near the Western Wall on May 10, 1940, wrote the following account: "To help pass the time, we doctors experimented on ourselves. We would begin the day by drinking a water glass of cognac and taking two injections of morphine. We found cocaine to be useful at midday, and in the evening we would occasionally take Hyoskin," an alkaloid derived from some varieties of the nightshade plant that is used as a medication. Wertheim adds: "As a result, we were not always fully in command of our senses."

German doctors experimented on themselves

To prevent an "outbreak of morphinism, as occurred after the last war," Professor Otto Wuth, a master sergeant and consulting psychiatrist to the military's senior medical command, wrote a "Proposal to Combat Morphinism" in February 1941. Under Wuth's proposal, all wounded who became addicted as a result of treatment were to be centrally recorded and reported to the "District Medical Board," where they would be either legally provided with morphine or routinely examined and sent to drug rehabilitation treatment centers. "In this manner," Wuth concluded, "morphine addicts will be recorded and monitored, and the entire group will be prevented from becoming criminal."

The Nazi leadership was more lenient with those who became drug-addicted as a result of the war than with alcoholics, probably because the Wehrmacht was concerned that it could be sued for damages, because it was in fact responsible for dispensing the drugs in the first place.