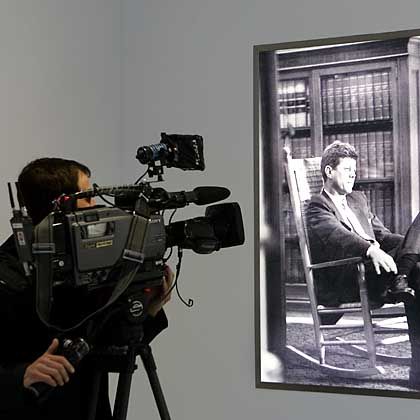 The glitter of the Kennedy years has staying power.

The sentence is one almost every German -- and certainly every German from Berlin -- still cherishes to this day: "Ich bin ein Berliner." And it was uttered by a man West Germany instantly took into its heart when he visited the divided city in 1963 at the height of the Cold War.

Now, President John F. Kennedy has a museum dedicated to his memory in the heart of Berlin, right next to the Brandenburg Gate. Set to open to the public on Saturday, the new exhibit provides a glittery overview of the Camelot era, when America had a lean young president with a glamorous wife and a pair of beaming young children. Museum curator Dr. Andreas Etges also says the collection shows the start of a "new era in politics and media."

Etges told reporters on Friday that one reason so many glamorous images of the family exist was that President Kennedy retained a personal photographer to humanize his image. "What happened with the Kennedys in the White House was that the private life of a president was made public," Etges said. "It was a new way of conducting politics."

But it was Kennedy's visit to Berlin that continues to fuel his popularity in Germany. Though he was only in the city for eight hours, many see it as a visit that saved the urban island surrounded by hostile East Germany. Not only did the visit boost morale in the recently hemmed in West Berlin (the Wall had been built just two years previously), but it also sent a defiant message to the Soviets that the US wasn't going anywhere.

And it made Kennedy an icon. Hundreds of thousands greeted the president as his drove through the streets of Berlin on June 26, 1963 -- some chanting "Kennedy, Kennedy, Kennedy." Indeed, it was the overwhelming welcome that gave him the idea to quickly revise his speech and include the phrase "Ich bin ein Berliner," which became the iconic phrase of the Cold War.

"We were a city under threat," Klaus Schütz, an official in Willy Brandt's administration during the visit, told AP. "And here comes the man who decides the question, and says he is a Berliner, that yes, he belongs to us, and they'll have to carry him out or get rid of him, that he intends to stay."

Not only that, but the sentence he uttered -- before 120,000 people in front of the Schöneberg Rathaus, quickly became the most popular grammar mistake in the German language. To purists, "Ich bin ein Berliner" means "I am a jelly-filled donut." The new museum, perhaps coincidentally, is around the corner from a Dunkin Donuts.

The exhibit, though, includes only a few shots of Kennedy's lightning tour of Berlin with then Mayor Willy Brandt and then Chancellor Konrad Adenauer. Instead, most of the photos show a relaxed president, his wife Jacqueline, and his brother Bobby in private as well as public moments -- boating, on the beach, working in the Oval Office with his son under the desk. The 300 items in the collection also include memorabilia like a crocodile-skin briefcase the president had with him in Dallas on the day of his assassination, and notes from his Berlin visit -- which include amusing phonetic tips on how to pronounce German words.

A photo gallery in Berlin called Camera Work AG owns the collection and decided to house it in an upscale museum -- ironically located just on the east side of where the Wall once cleaved the city in two -- after recent shows in Rome and Berlin met with an overwhelming response.

The outpouring of support for Kennedy in Berlin contrasts mightily, of course, with the sour German attitude toward current US President George W. Bush. Anthony Kennedy-Shriver, a nephew of the former president who came to Berlin on Friday to help open the museum, said there was a fundamental difference between his uncle's foreign-policy style and the style of almost every administration since.

The museum, called simply "The Kennedys" is located at Pariser Platz 4a -- just in front of the Brandenburg Gate -- and is open daily from 10 a.m. to 6 p.m. Tickets cost €7.