On a good day, Joseph Vacher could win over a woman with his disarmingly innocent demeanor. In these states of mind, he wrote letters in an ornate, rounded feminine handwriting and amused children by making faces at them.

But then Vacher would go into uncontrolled rages. Once, he beat his small dog to death with a club because it wasn't eating its food.

His crimes against human beings were much worse. In remote forests and barns, Vacher, the son of a farmer, raped and murdered a total of 11 people, most of them children.

In late 19th-century France, this diminutive serial killer epitomized ordinary citizens' fears of the evil that lurks in the darkness. At the time, the guillotine was still used to execute dangerous criminals in France. In the Vacher case, however, the judges were hesitant to impose the death penalty. Was the mass murderer "a cannibal" who had to be beheaded, or was he a "certifiably insane person" who was to be locked up in an asylum?

Douglas Starr, a professor of journalism at Boston University, has now reconstructed the series of murders Vacher committed.

In his book, "The Killer of Little Shepherds," Starr does not, however, assign the leading role to Vacher, the child murderer, but to the man who was to solve the Vacher mystery: Alexandre Lacassagne, the head of forensic medicine in the southern city of Lyon.

Lacassagne solved murder cases that seemed unsolvable at the time. To this day, students in police academies are taught the methods of the master criminologist from Lyon.

For example, unlike his colleagues, Lacassagne was able to identify a largely decomposed corpse and conclude that it was the body of a once-prominent Paris bailiff.

On another occasion, this predecessor of the forensic scientists on the "CSI" TV shows exposed a bizarre cock-and-bull story. It was alleged that a woman's lover had tried to hide from her jealous husband by locking himself in a suitcase, where he then seemingly suffocated. After investigating the case, Lacassagne concluded that the victim was already dead before he was placed inside the suitcase.

At about the same time, Arthur Conan Doyle's famous fictional character, the brilliant detective Sherlock Holmes, was busy solving impossible cases. "Fascinating technique," Lacassagne concluded, "But why does he never perform an autopsy?" Criminologists considered Lacassagne to be far more capable than Holmes. Unlike the fictional London detective, the real-life criminologist from Lyon revolutionized his field. "He was one of the first to recognize that everything doesn't end with death, but that instead the existence of the body enters a new phase," says author Starr.

By tracing the movement of insects on a corpse, Lacassagne could determine with some certainty how long the process of decay had been underway in the body. He used traces of blood on the skin of a dead person to determine how the body had been moved. Using the arm and thigh bones of a dead body, he could precisely determine its height. Lacassagne also discovered that different types of rifles and pistols left different markings on the ammunition.

But Lacassagne was unable to come to grips with Vacher's disturbing character solely through the interpretation of physical clues. The knife murderer alternately described himself as "God's anarchist" and the "revenant of Joan of Arc." Vacher blamed his bloody deeds on the bite of a rabid dog in his childhood. Was he even responsible for his actions?

Lacassagne didn't just analyze the spectacular case with the methods of criminology, but also scrutinized the killer's psychopathological background, marking the birth of forensic psychiatry. In 1898, no criteria existed to evaluate a man like Vacher. The 15th of 16 children, he tortured animals as a young child and attempted his first rapes as a teenager. Vacher never showed the slightest sign of remorse, not even for his bloody murders.

Nowadays, these are all considered typical symptoms of a psychopath. But this category of the severely disturbed was completely unknown to Lacassagne. Instead, the pioneering forensic scientist searched for a pattern in Vacher's acts of butchery -- and found it.

At each of the murder scenes, it seemed as if a predatory animal had gone on a rampage. Nevertheless, Lacassagne recognized a system: Vacher had always stalked his victims from behind, slit their throats with the professionalism of a hunter, sodomized them and then disemboweled them.

"These are the acts of a sadistic, antisocial individual. He is culpable," Lacassagne concluded. 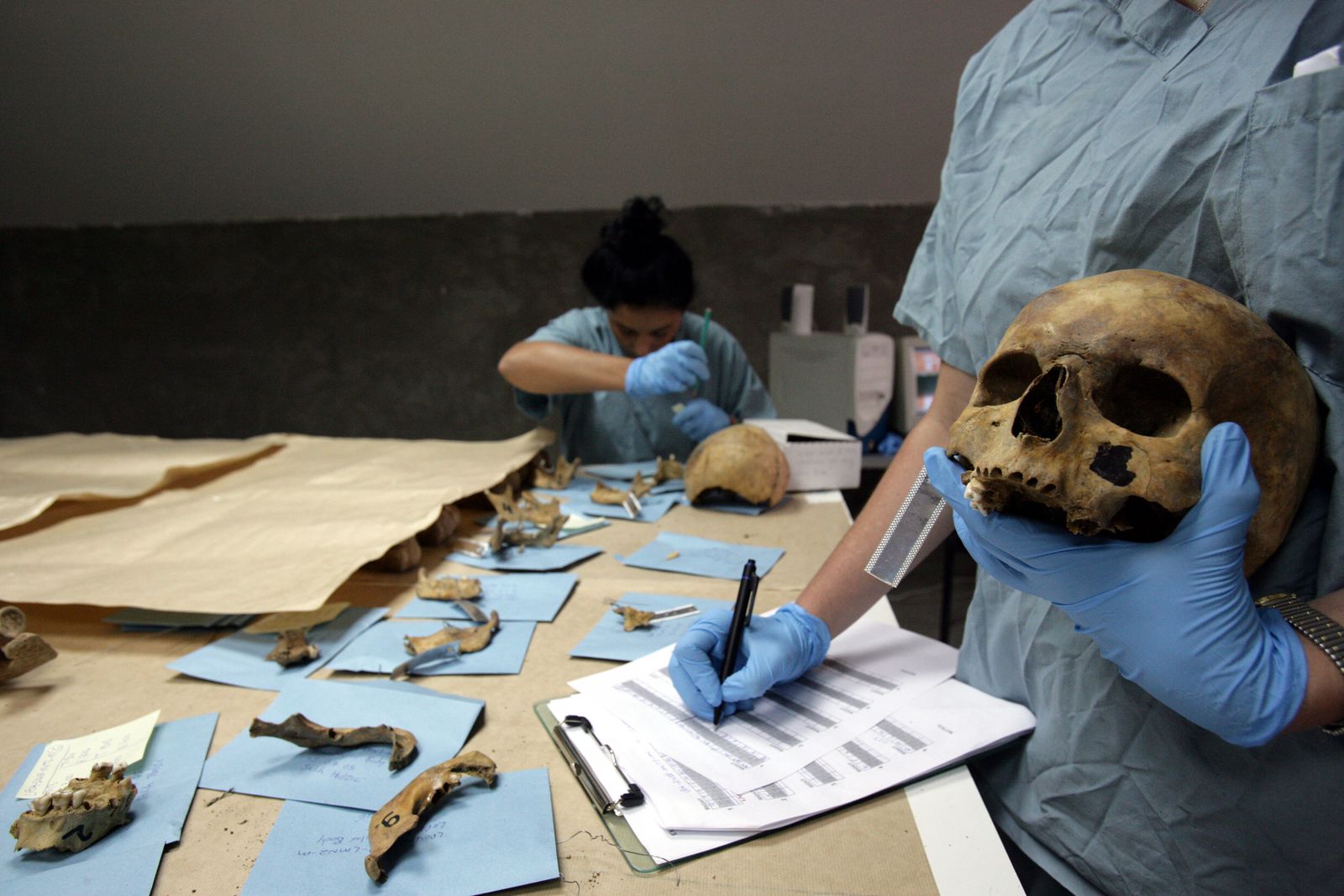 Forensic anthropologists at work in Bosnia.