Oil. The world economy's thick elixir yields politics as murky and combustible as the crude itself. And no wonder. It brings together some awkward bedfellows: It's where multinationals meet villagers, where executives meet environmentalists, where vast wealth meets deep poverty, where East meets West. 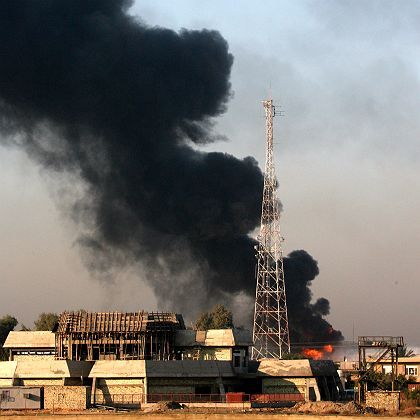 Iraq's al Dora refinery blazes after being hit by a mortar last week.

Oil, of course, can be politically explosive at the best of times, let alone the worst. So, when the country with the third largest oil reserves in the world debates the future of its endowment during a time of civil war, people sit up and take notice.

The Iraqi government is working on a new hydrocarbons law that will set the course for the country's oil sector and determine where its vast revenues will flow. The consequences for such a law in such a state are huge. Not only could it determine the future shape of the Iraqi federation -- as regional governments battle with Baghdad's central authority over rights to the riches -- but it could put much of Iraqi oil into the hands of foreign oil companies.

Political differences could still derail the legislative process. The Kurdish and Shia populations want to control their oil-rich territories without Baghdad's help. Meanwhile Sunni Arabs located in the oil-poor center of the country want the federal government to guarantee they're not excluded from the profits.

That hasn't stopped the Kurdish Regional Government (KRG), though. The KRG has already signed agreements of its own with oil companies. But Baghdad has declared the contracts invalid, and the new draft law states that Iraq's oil exploration, production and transport would be handled by the central government in Baghdad, according to excerpts of the draft published by Dow Jones Newswires.

Nevertheless, the draft law lays the ground work for private oil companies to take large stakes in Iraq's oil. The new law would allow the controversial partnerships known as 'production sharing agreements' (PSA). Oil companies favor PSAs, because they limit the risk of cost overruns while giving greater potential for profit. PSAs tend to be massive legal agreements, designed to replace a weak or missing legal framework -- which is helpful for a country like Iraq that lacks the laws needed to attract investment.

It's also dangerous. It means governments are legally committing themselves to oil deals that they've negotiated from a position of weakness. And, the contracts typically span decades. Companies argue they need long-term legal security to justify huge investments in risky countries; the current draft recommends 15 to 20 years.

Nevertheless, Iraq carries little exploratory risk -- OPEC estimates Iraq sits atop some 115 billion barrels of reserves and only a small fraction of its oil fields are in use. By signing oil deals with Iraq, oil companies could account for those reserves in their books without setting foot in the country -- that alone is enough to boost the company's stock. And, by negotiating deals while Iraq is unstable, companies could lock in a risk premium that may be much lower five or ten years from now.

Without drastic improvements in the security situation, companies are unlikely to begin operations anytime soon. "The legislation is not a golden bullet," one industry source told SPIEGEL ONLINE. Western oil companies are happy to receive Iraqi officials in their European headquarters, but are not keen to return the visit. Firms from China, Russia and India, however, are less intimidated by Iraq's precarious security situation and actively court Baghdad on its home turf.

Russia, after all, knows first hand what's at stake. They negotiated PSAs after the fall of communism, but the terms turned out to be so disadvantageous that they've taken to nationalizing the projects in question. Not unlike Iraq today, Russia then had weak governance and needed the money.

That's why some fear Iraq is setting its course too hastily and in too much secrecy. Greg Muttitt of social and environmental NGO Platform London told SPIEGEL ONLINE: "I was recently at a meeting of Iraqi MPs (members of parliament) and asked them how many of them had seen the law. Out of twenty, only one MP had seen it."

Last week, the Iraqi Labor Union Leadership suggested the same. "The Iraqi people refuse to allow the future of their oil to be decided behind closed doors," their statement reads. "(T)he occupier seeks and wishes to secure themselves energy resources at a time when the Iraqi people are seeking to determine their own future while still under conditions of occupation."

Many worry instability would only get worse if the public feels cheated by the government and multinationals -- the Iraqi constitution says the oil belongs to the Iraqi people. The Labor Union Leadership warned: "We strongly reject the privatization of our oil wealth, as well as production sharing agreements, and there is no room for discussing the matter. This is the demand of the Iraqi street, and the privatization of oil is a red line that may not be crossed."

Peter Eigen, chairman of the Extractive Industries Transparency Initiative, a body that aims to bring improved governance in resource-rich countries, told SPIEGEL ONLINE that an open debate is crucial. "Civil society and private sector should play a role in this," he said. "If this doesn't happen, it will just be another country where the blessing of petroleum has been turned into a curse."

Oil is central to Iraq's reconstruction and economic recovery, and the U.S. government is urging Iraq to develop the sector quickly. The recent Iraq Study Group report recommended the US help Iraq "prepare a draft oil law" to hasten investment. The report estimates Iraq could raise oil production from 2 million to 3 or 3.5 million barrels per day over the next three to five years.

Critics say the US is leaning on the IMF and World Bank to push Iraq into signing oil contracts fast, so western firms can secure the oil before Chinese, Indian and Russian firms do. An IMF official told SPIEGEL ONLINE that "passage of a hydrocarbon law is not a condition for financial support from the IMF." Nevertheless, Iraqi authorities found it necessary to promise the IMF a draft petroleum law by the end of this year -- this in the same letter that says "we will take whatever steps are necessary to ensure that the program remains on track."

The IMF sets the conditions for Iraq's debt relief from the so-called Paris Club countries. Eighty percent of that debt has been wiped clean, and the final 20 percent depends on certain economic reforms. With the final reduction, Iraq's debt would come to 33 percent of its GDP -- but if the reforms are not made, debt would climb to 57 percent of GDP, according to an IMF report.

Criticisms have also been levelled against the World Bank, where former US deputy defense secretary Paul Wolfowitz is in charge. Wolfowitz has been accused of pushing a US agenda after opening a World Bank office in Baghdad.

Most agree that Iraq should develop its oil -- the question is how and how fast. Apart from the law's content, Eigen stresses the drafting process must be transparent for any law to succeed: "Everything that is done behind closed doors will probably have to be renegotiated later."