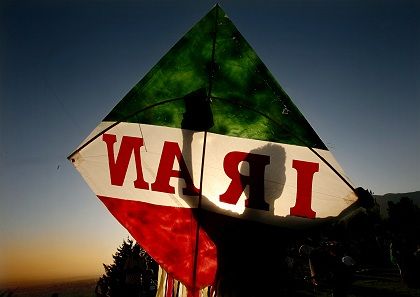 It's not always easy to get straightforward information in Iran.

As August came to a close, Reza Hashemi, the manager of an apartment building in northern Tehran, received an upsetting letter from the police. The note contained an ultimatum: Remove the satellite receivers from the roof, or well remove them for you. For a few days, Hashimi assumed it was an empty threat. A law against satellite dishes had been on the books in Iran since the mid-1990s, but it had mostly gone un-enforced - even if it was an open secret that many Iranians used the technology to receive "un-Islamic" television shows from abroad. Then the police came knocking at a neighboring building.

They came with an empty truck; when they left it was full of satellite dishes, Hashemi said as he went door-to-door in his building, breaking the bad news to his tenants. At other buildings, they came with hammers and destroyed them right there. At least on one occasion, the police didnt even bother with tools. Last week, an Iranian wire service distributed a photo of a police officer casually dropping a dish off the ledge of a skyscraper rooftop.

Satellite dishes have not been the only target. A law passed by the Iranian parliament this past spring bars Iranians from appearing on foreign-produced broadcasts. Jamming of unapproved radio signals and Internet sites is common practice.

In all, the Iranian government seems intent on defending itself against foreign efforts to break its monopoly on broadcast journalism within the country. Some of these efforts from overseas are, indeed, unabashed. Earlier this week, President Bush delivered a speech at the United Nations General Assembly, a portion of which amounted to an expression of his administration's hope for regime change in Tehran addressed directly to "the people of Iran." Meanwhile, earlier this year, the US Congress committed $50 million dollars to the development of a new Farsi-language satellite television channel. It will join the myriad of private broadcasts hostile to the Iranian regime that are produced by Iranian immigrants in California.

The Iranian people, for their part, seem largely indifferent to the battle between domestic and international news media for their hearts and minds. Indeed, when considering the issues of the day, Iranians display remarkable self-sufficiency. Many Iranians will consult a diversity of media outlets foreign and domestic, but ultimately dismiss professional journalism altogether. Instead they devise their own idiosyncratic analyses of current events, drawing on a long Iranian tradition of conspiracy theorizing. Iranians, says Professor Abbas Milani, Director of the Iranian Studies Program at Stanford University in California, have developed their own special language for dealing with the world."

The prevalent cynicism with which Iranians approach the news media is largely a product of the countrys distorted media landscape, where journalism is ubiquitous, but objective news reporting is rare. We dont have a free market, a journalist from a conservative Iranian wire service admitted to SPIEGEL ONLINE. The government sets the tone.

The governments control on the news media is nothing new. According to Vasij Naderi, professor of law in Tehran, Iran has experienced only two short periods in its history when the press has been able to function relatively unfettered: the years between the end of World War II and the coup against Mohammed Mossadeq (in 1953) and the months after the election of President Khatami in the late 1990s.

But, even the reformist transition of the late 1990s never managed to wrest domestic television from the hands of the state. Without a satellite dish, television viewers in Iran have access to six stations, all of which are staffed at the discretion of the Islamic government. Unsurprisingly, broadcasts are exceedingly pious. In one Dr. Phil-type segment, a cleric warned about the evils of abortion and praised a young boy who had memorized the Koran. The reports are also unabashedly partisan. UN resolution 1701 is routinely described as a Hezbollah victory rather than a cease-fire, while Israel is exclusively referred to as the Zionist regime.

State television's coverage of the nuclear conflict is painted in equally bold strokes. Iran's nuclear program is presented, whenever possible, as a symbol of scientific, not military, progress. At the stage-managed event in February celebrating Iran's successful enrichment of uranium, President Mahmoud Ahmadinejad delivered a speech before a backdrop depicting a flock of doves, after which a group of interpretive dancers performed a ballet about the beauty of enriched uranium. Meanwhile, Israel and America are depicted as dangerous war-mongerers.

The government maintains similar, if more subtle, control over the print media. A cursory glance suggests a thriving newspaper scene: Iran boasts dozens of daily papers, which, when seen spread on the sidewalks before newsstands, can give the impression of an active national debate.

None of them, though, are free from ties to the Islamic government. Aside from the subsidies that most newspapers receive from the state to help cover costs not met by advertising revenue, all newspapers are required to mind what are informally referred to as red lines. Red lines mark the minimum respect that ought be paid to the government and the Islamic Revolution, lest the Ministry of Culture revoke the papers license to publish.

Alas, it's not always clear where those red lines are. The popular reformist paper Sharq was shut down in early September after publishing a cartoon in which a donkey with a halo and a horse discussed the regime's handling of the nuclear crisis. Editors argued that it was an innocuous doodle, but the government's press-supervisory board charged the paper with religious blasphemy.

The ambiguous guidelines result in an atmosphere of fear and intimidation. The rules are kept ambiguous so that journalists learn to police themselves, says Milani. In practice the myriad of daily newspapers all hew close to the government line. And with Iranians forbidden from appearing on foreign broadcasts, there's no other sanctioned outlet.

We are in a vicious circle. With these crackdowns, more Iranian intellectuals, journalists, scholars are taking refuge with outside-based media to express themselves, says Mashaallah Shamsolvaezin, spokesman for the Iranian Association for the Defense of Journalists. Then theyre accused of collaboration with foreign media and arrested.

The Iranian public responds, in turn, by approaching news reports with scepticism. It is a mechanism Iranians are accustomed to. The traditional Iranian social custom of taarof is a ritualized manner of offering something without actually meaning it. Its typical, for example, for taxi drivers to initially refuse payment at the end of the ride, until the passenger insists on paying. Having been raised with this quotidian variety of double-speak, Iranians are used to not taking what they are told at face value. 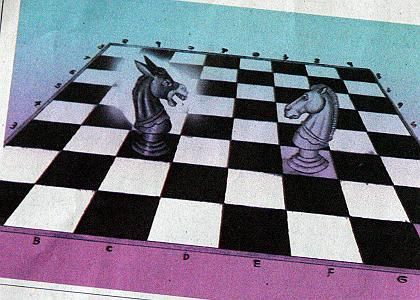 The cartoon which doomed Sharq. The donkey and the horse are discussing the Iranian regime's handling of the nuclear crisis.

They dont typically restrict their skepticism to the Iranian media, though. Most Iranians that tune-in to American-funded Voice of America and lower-budget LA talk shows are well aware that those broadcasts are aiming for regime change. None of these channels are credible. They exaggerate and stretch the truth. No one would start a revolution on the basis of what they say, says Professor Naderi. Iranians watch these programs not because they trust the broadcasts, but rather because theyre seeking a source to balance out the Iranian state media. Even Ayatollah Khomeini used to listen to Voice of America and Radio Israel, points out Professor Milani.

Ostensibly objective news outlets like CNN and the BBC are dismissed in the same way. Every country is just giving its own version of world events, says Ryan Kazemi, a student at Tehran University. Its clear from CNN that America wants to start a war. Really, its up to each person to make up his own mind.

With no consensus on whats to be trusted, many Iranians tend to formulate interpretations of world events that effectively oppose the official stories offered by their government and Western media outlets. But the private analyses of most Iranians come across as little more than idiosyncratic conspiracy theories in which American power plays an outsize role. Public power, in this view, is never to be trusted and intentions are never what they seem. Iran already has 10 or 15 nuclear bombs, reports a taxi driver; America wants perpetual war between Israel and other Middle Eastern countries, explains an accountant; Ahmadinejad raises the price of yogurt only so he can get credit for lowering it later, reveals a hairdresser.

Milani, for one, is not surprised by the paranoia. Conspiracy theories are the natural result when theres no sense of social agency, he says. Theres no other way to make events cohere.

Still, one Iranian journalist who preferred to remain anonymous suggested that the Iranian approach to news had advantages over the Western attitude. Europeans are complacent, he says. Theyve forgotten how to think for themselves and so elites control public opinion.

Whatever merits such an argument might have, it seems though that Iranians wouldnt mind a respite from the need to constantly formulate their opinions and re-orient themselves in the world. The information war between the West and Iran continues unabated, but many Iranians seem just as content to tune out. Indeed, the one tenant who objected most vehemently to Hashemis request that his satellite dish be taken down wasnt lamenting the loss of CNN or the Voice of America. Please, no, he cried. There's a soccer game tonight! Germany plays Ireland!