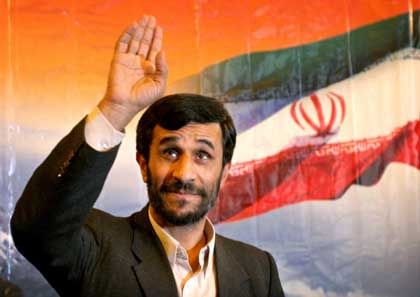 Following Iranian President  Mahmoud Ahmadinejad's recent anti-Israel statements, reports are increasing that Washington may be preparing its allies for a military strike against Iran.

It's hardly news that US President George Bush refuses to rule out possible military action against Iran if Tehran continues to pursue its controversial nuclear ambitions. But in Germany, speculation is mounting that Washington is preparing to carry out air strikes against suspected Iranian nuclear sites perhaps even as soon as early 2006.

German diplomats began speaking of the prospect two years ago -- long before the Bush administration decided to give the European Union more time to convince Iran to abandon its ambitions, or at the very least put its civilian nuclear program under international controls. But the growing likelihood of the military option is back in the headlines in Germany thanks to a slew of stories that have run in the national media here over the holidays.

The most talked about story is a Dec. 23 piece by the German news agency DDP from journalist and intelligence expert Udo Ulfkotte. The story has generated controversy not only because of its material, but also because of the reporter's past. Critics allege that Ulfkotte in his previous reporting got too close to sources at Germany's foreign intelligence agency, the BND. But Ulfkotte has himself noted that he has been under investigation by the government in the past (indeed, his home and offices have been searched multiple times) for allegations that he published state secrets -- a charge that he claims would underscore rather than undermine the veracity of his work.

According to Ulfkotte's report, "western security sources" claim that during CIA Director Porter Goss' Dec. 12 visit to Ankara, he asked Turkish Prime Minister Recep Tayyip Erdogan to provide support for a possibile 2006 air strike against Iranian nuclear and military facilities. More specifically, Goss is said to have asked Turkey to provide unfettered exchange of intelligence that could help with a mission.

DDP also reported that the governments of Saudi Arabia, Jordan, Oman and Pakistan have been informed in recent weeks of Washington's military plans. The countries, apparently, were told that air strikes were a "possible option," but they were given no specific timeframe for the operations.

In a report published on Wednesday, the Berlin daily Der Tagesspiegel also cited NATO intelligence sources claiming that Washington's western allies had been informed that the United States is currently investigating all possibilities of bringing the mullah-led regime into line, including military options. Of course, Bush has publicly stated for months that he would not take the possibility of a military strike off the table. What's new here, however, is that Washington appears to be dispatching high-level officials to prepare its allies for a possible attack rather than merely implying the possibility as it has repeatedly done during the past year.

Members of the People's Liberation Army of Kurdistan (ARGK) who are the military wing of the Kurdistan Workers Party (PKK) in mountain hideout in northern Iraq near the Turkish border.

According to DDP, during his trip to Turkey, CIA chief Goss reportedly handed over three dossiers to Turkish security officials that purportedly contained evidence that Tehran is cooperating with Islamic terror network al-Qaida. A further dossier is said to contain information about the current status of Iran's alleged nuclear weapons program. Sources in German security circles told the DDP reporter that Goss had ensured Ankara that the Turkish government would be informed of any possible air strikes against Iran a few hours before they happened. The Turkish government has also been given the "green light" to strike camps of the separatist Kurdistan Workers' Party (PKK) in Iran on the day in question.

The DDP report attributes the possible escalation to the recent anti-Semitic rants by Iranian President Mahmoud Ahmadinejad, whose belligerent verbal attacks on Israel (he described the Holocaust as a "myth" and called for Israel to be "wiped off the map") have strengthened the view of the American government that, in the case of the nuclear dispute, there's little likelihood Tehran will back down and that the mullahs are just attempting to buy time by continuing talks with the Europeans.

The German wire service also quotes a high-ranking German military official saying: "I would be very surprised if the Americans, in the mid-term, didn't take advantage of the opportunity delivered by Tehran. The Americans have to attack Iran before the country can develop nuclear weapons. After that would be too late."

Despite the wave of recent reports, it's naturally difficult to assess whether the United States has any concrete plans to attack Iranian nuclear facilities. In a January 2005 report in the New Yorker, US investigative journalist Seymour Hersh claimed that clandestine American commando groups had already infiltrated Iran in order to mark potential military targets.

At the time, the Bush administration did not dispute Hersh's reporting -- it merely sought to minimize its impact. In Washington, word circulated that the article was filled with "inaccurate statements." But no one rejected the core reporting behind the article. Bush himself explicitly stated he would not rule out the "option of war."

How great is the threat? 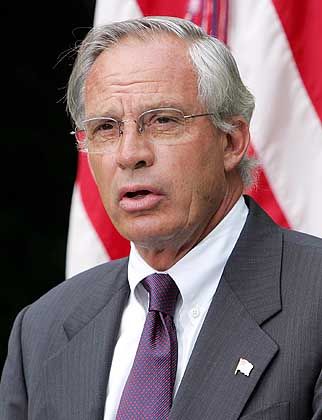 So is the region now on the verge of a military strike or even a war? In Berlin, the issue is largely being played down. During his inaugural visit with US Defense Secretary Donald Rumsfeld in Washington last week, the possibility of a US air strike against Iran "hadn't been an issue," for new German Defense Minister Franz Josef Jung, a Defense Ministry spokesman told SPIEGEL ONLINE.

But the string of visits by high-profile US politicians to Turkey and surrounding reports are drawing new attention to the issue. In recent weeks, the number of American and NATO security officials heading to Ankara has increased dramatically. Within a matter of only days, the FBI chief, then the CIA chief and, most recently, NATO General Secretary Jaap De Hoop Scheffer visited the Turkish capital. During her visit to Europe earlier this month, US Secretary of State Condoleezza Rice also traveled to Turkey after a stopover in Berlin.

Leading the chorus of speculation are Turkish newspapers, which have also sought to connect these visits to plans for an attack on Iran. But so far none of the speculation has been based on hard facts. Writing about the meeting between Porter Goss and Tayyip Erdogan, the left-nationalist newspaper Cumhuriyet wrote: "Now It's Iran's Turn." But the paper didn't offer any evidence to corroborate the claims.

Instead, the paper noted that the meeting between the CIA chief and Erdogan lasted longer than an hour -- an unusual amount of time, especially considering Goss had previously met with the head of Turkey's intelligence service, the MIT. The Turkish media concluded that the meetings must have dealt with a very serious matter -- but they failed to uncover exactly what it was. Most media speculated that Erdogan and Goss might have discussed a common initiative against the PKK in northern Iraq. It's possible that Goss demanded secret Turkish intelligence on Iran in exchange. Regardless what the prospects are for a strike, there's little chance a US air strike against Iran would be launched from its military base in the Turkish city of Incirlik, but it is conceivable that the United States would inform Turkey prior to any strike. 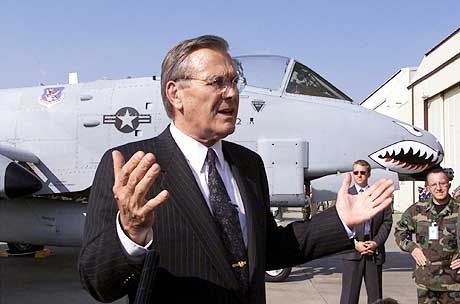 US Defense Secretary Donald H. Rumsfeld talks to the media during his visit to the Incirlik Air Base, southern Turkey, on Monday, 04 June 2001.

Until now the government in Ankara has viewed US military activities in the region at best with skepticism and at worst with open condemnation. At the beginning of 2003, Ankara even attempted to prevent an American ground offensive in northern Iraq against the Saddam regime. A still-irritated Donald Rumsfeld has repeatedly blamed military problems in Iraq on the fact that this second front was missing.

Two weeks ago, Yasar Buyukanit, the commander of the Turkish army and probable future chief of staff of the country's armed forces, flew to Washington. After the visit he made a statement that relations between the Turkish army and the American army were once again on an excellent footing. Buyukanit's warm and fuzzy words, contrasted greatly with his past statements that if the United States and the Kurds in northern Iraq proved incapable of containing the PKK in the Kurd-dominated northern part of the country and preventing it from attacking Turkey, Buyukanit would march into northern Iraq himself.

At the same time, Ankara has little incentive to show a friendly face to Tehran -- Turkish-Iranian relations have long been icy. For years now, Tehran has criticized Turkey for maintaining good relations with Israel and even cooperating with the Israeli army. Yet despite those ties to Israel, Ahmadinejad's recent anti-Israeli outbursts were reported far less extensively in Turkey than in Europe.

Still, Erdogan has been demonstrably friendly towards Israel recently -- as evidenced by Erdogan's recent phone call to Ariel Sharon, congratulating the prime minister on his recent recovery from a mild stroke. In the past, relations between Erdogan and Sharon have been reserved, but recently the two have grown closer. Nevertheless, Turkey's government has distanced itself from Sharon's threats to stop Iran from developing a nuclear weapon on his own if nobody else steps up to the task.

The Turkish government has also repeatedly stated that it opposes military action against both Iran and Syria. The key political motivation here is that -- at least when it comes to the Kurdish question -- Turkey, Syria and Iran all agree on one thing: they are opposed to the creation of an independent Kurdistan in northern Iraq. But if the United States moves forward with an attack against Iran, Turkey will have no choice but to jump on board -- either as an active or passive partner.

It's a scenario that has Erdogan and his military in a state of deep unease. After all, even experts in the West are skeptical of whether a military intervention against nuclear installations in Iran could succeed. The more likely scenario is that an attack aiming to stop Iran's nuclear program could instead simply bolster support for Ahmadinejad in the region.