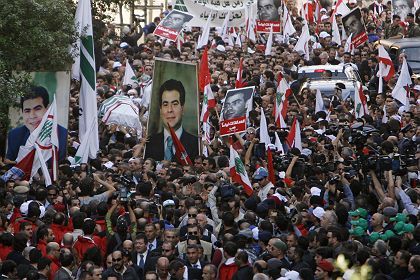 Hundreds of thousands attended funeral ceremonies for Pierre Gemayel on Thursday in Beirut.

What's going to happen to Lebanon? With the country once again torn apart by a political assassination, and hundreds of thousands of anti-Syrian forces taking to the street on Thursday to mourn slain Industry Minister Pierre Gemayel, it's a question on the minds of many this week.

Particularly worrisome are the indications that neither side seems much in the mood for dialogue at the moment. Pro-Syrian Hezbollah is still set on its strategy of toppling the government of Prime Minister Fuad Siniora on the one hand. On the other, the anti-Syrian parliamentary majority remains supportive of UN efforts to set up a tribunal to try those behind the 2005 assassination of former Lebanese Prime Minister Rafik Hariri.

The most recent politically-motivated killing is likely to add fuel to the fire.

The left-wing daily Die Tageszeitung believes Gemayel's death "can only be interpreted as a bad omen for Lebanon." The cleft between pro-Syrian Hezbollah and the anti-Syrian parliamentary majority has become even wider, the paper points out, and posits that the timing of Gemayel's assassination "shows that the deed was aimed at triggering the universally feared civil war." At the same time, the immediate accusations against Syria only increase the political tensions in Lebanon, the paper writes. Hezbollah is now on the defensive, while Syria suffered a setback in its goal to improve relations with the West. "Gemayel's assassination is actually in the interest of neither political camp," the paper concludes.

The Financial Times Deutschland agrees that "Lebanon is on the brink of ... a civil war." Although Germans are used to bad news from Lebanon, the business daily says that this time, Germany is directly involved. While the German navy patrols the Lebanese coast to prevent arms smuggling, "Hezbollah and their Syrian and Iranian godfathers are blatantly using gangster-methods to grab for power," the paper says. And as Washington and London openly consider an Iraq-deal with Syria and Iran, "Damascus sees all trump cards in its hand." For the FTD, this means that UN peacekeepers "should ask themselves who in Beirut will be giving them orders in the future."

The Süddeutsche Zeitung also characterizes Gemayel's death as "a classic Al-Capone-style assassination." But the center-left paper takes speculation on who was behind the shooting several steps further. First, Syria: Since the UN tribunal on Syria's possible involvement in the 2005 assassination of former Prime Minister Hariri is moving forward regardless of Gemayel's death, "Syria ... would have nothing to gain from the murder." Others, though, could profit from the killing, the daily paper writes. Iran, for example, in a subversive attempt to "force the Syrians even further into the anti-Western coalition under Teheran's leadership." Then there are "those pro-Western forces who want the international Hariri-trial to begin as soon as possible." The paper even -- rather oddly -- posits that maybe Israel murdered Gemayel to put even more pressure on Syria. Whatever the truth: "The oppressed state (of Lebanon) has for decades been the playing field of external forces, which are ruining the small country in the process.