Say what you will about press bias in the United States. No one in Germany ever felt the need to pretend: Like elsewhere in Europe, the media here was always in the bag for Barack Obama. 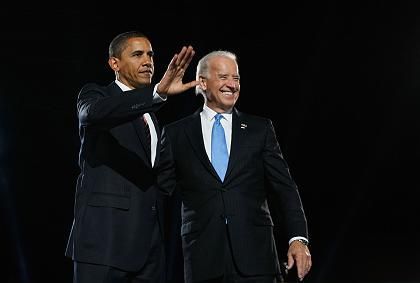 Now that their "smart," "attractive," "cosmopolitan" darling has made history by becoming the first African-American to win the White House, German opinion-makers are trying to strike a balance between pure celebration and sober-minded reflection.

After eight years of strained, if not chilly, relations between Washington and Berlin, the German media sees Obama's election as an opportunity to repair America's image and re-establish the US as a role model for the world.

But after the obligatory tributes to the enormity of the event, editorial-writers were quick to fall back into the more familiar German mode of compiling caveats: expectations are too high; Americans are still war mongers; Europe will not be able to rise to the occasion; the challenges facing the president-elect are simply too great.

Editorialists allowed themselves three paragraphs of drunken jubilation. Then it was back to German sobriety.

"Precisely in Europe, which has greeted Obama with such lyrical euphoria, it's easy to forget that the American 'mainstream' has been running down a different path for some time. Even if the religious groups have now lost some influence, and even if the friend-foe schema has faded -- America is still at its core a conservative country which cherishes strength and superiority. Even if Obama approaches the world with open arms, that will not guarantee his success at home. Jimmy Carter, too, took a gentle approach, operating under the shadow of Vietnam and Richard Nixon. For this reason he never became a great president."

"The talk of the moment is of 'redemption,' and the teary faces on election night were proof of an enormous release of tension. The first black president -- what a symbol for a society trying to reclaim its global leadership in dynamism and openness. What a sign, too, for minorities and for those with hope, a group which -- taken together -- will soon constitute a majority in the US. Redemption, perhaps, because these symbols have been made possible. Redemption also from the stress of the Bush years. But in the end Obama is no redeemer and his stylization as a messiah won't help anymore. Obama is simply the President, and he will have to perform the duties of his office."

"When the intoxication over what is undoubtedly a national victory has dissipated, Obama and his team will get an idea of the gravity of the present situation. His victory speech, which, in line with his tone in recent weeks, expressed an almost dark sobriety, was an assertion of this gravity. Now it naturally depends on him to develop reasonable answers to domestic and foreign challenges, to work out a governing plan, and to compile his list of personnel. But not only that. When Obama takes his oath of office on Jan. 20, it needs to be clear to him how he wants to rule -- hopefully from the center; he must also be clear on how he wants to heal the rift that still exists -- almost half the electorate did not vote for him -- and how his message of reconciliation will translate itself into policy. But if he follows the instincts of the Democratic majority in Congress or the political preferences of the 'early' Obama, then he'll be doing a favor neither to himself nor to his country. But if he manages in style, tone and substance to overpower the political trench warfare in Washington, then his promise of a new beginning will have born its first fruit. His predecessors also promised to (change the tone in Washington) -- and all of them made it worse."

"Barack Obama, despite the long campaign, is still for many Americans a blank page. A majority voted for him because they considered the risk of doing so to be less important than the forward outlook that he embodies. He is the future promise of America."

"For months it's been publicy debated (in Germany) how we would react, if a President Obama, God protect him, should request a stronger German troop commitment in Afghanistan. The result: no one knows, and we hope he doesn't ask. Instead of developing our own initiatives or submitting European suggestions to Obama, the German government clings to its deployment, which is probably ill-conceived and which is probably condemned to failure by its indecisiveness. What exactly do we want to communicate to the US?"

"It would probably do some good to our new relationship with the US under President Obama if he met with allies that didn't duck away and wait but rather thought for themselves. As Obama has always told his crowds, 'This change isn't about me, it's about you!.' Europeans should behave as if he were talking to them."

"Barack Obama has up to now remained cloudy. This has caused a lot of Europeans to see in him a kindred spirit: someone like us. Behind this annexation of the next president in the discursive, sentimental, and peaceful community of the old continent is hidden an oft-described misunderstanding, that very soon will become apparent. Obama is American, will represent American interests, and will therefore more closely approximate George Bush than, say, Heidemarie Wieczorek-Zeul (the left-leaning Social Democrat who heads Germany's Development Ministry). And precisely because Europe likes him so much, it will be very astonishing when the lovely Mr. Obama, in true multilateral fashion, demands more engagement from Europeans -- not least military -- here and there around the world."

"And yet the enthusiasm that has engulfed Obama in almost all parts of the world is also an asset. America, which has helped Europe and Germany get out of dire straits at least three times, is not beloved and is misjudged. Obama's election to the presidency can help to open the eyes of those who have overlooked America's inner greatness and attractiveness. With Obama as president, anti-Americanism will have to revamp itself."

The tabloid Bild writes under the headline "Messiah Obama":

"The new president will be greeted by the world as a savior. In Germany above all. Everyone has now fallen freshly in love with the new America, the other America, the good America. Obamerica, even. "

"The new trans-Atlantic embrace is an historic opportunity. We owe to the Americans our comeback after the war, the defense of Berlin during the Berlin Airlift, German unification, the reestablishment of peace in Kosovo, protection against terrorists, and much more. Economically, too, we're far more dependent on the Americans than they are on us."

"For this reason it's important that the enthusiasm continue after the election party is over. The young, smart, attractive president brightens the mood -- but also inspires overly high expectations that no one could fulfill. America is moving into a domestic and foreign policy whirlpool. Even Obama will not be able to swim against the current. He will -- hopefully -- display more continuity than many now believe."

"Perhaps it will be the 'nice' Obama rather than the 'mean' Bush who will really test the German-American friendship. You know who your real friends are during storms, not when the weather is good."

"Just like John F. Kennedy -- with whom he is often compared -- 48 years ago, Obama will depend on support from below if he wants to succeed. And on election night he called upon the people, not with the same words, but the with same content as Kennedy: we are not far from our goal and everyone must prepare themselves for struggle and sacrifice."

"Obama has propelled a grassroots movement to victory. If he succeeds in mobilizing their huge enthusiasm for the project of societal renewal, then his project has an actual chance."

"Obama also has good chances abroad. Without the heavy burden of the Bush years he can credibly make a new beginning. He can hope for accommodation from America's friends; he can even expect it. The time when Europe could simply point to George W. Bush and withdraw from contemporary affairs is now, as of yesterday, over. The transatlantic bridge can finally be repaired.