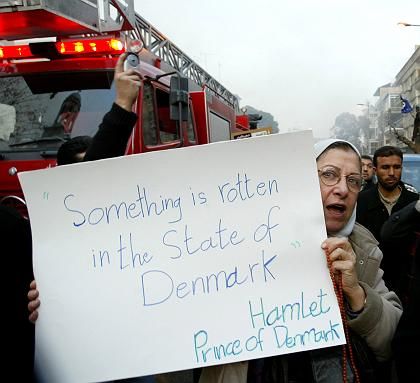 A Syrian protestor: Will Iranian President Mahmoud Ahmadinejad succeed in winning political capital with his neighbors over the Danish cartoon scandal?

The class of civilizations -- or Kampf der Kulturen as it's known in German -- continued on Wednesday, with Europeans calling for calm in the Muslim world. So far, violent protests around the world have claimed seven lives. Leading the ruckus is Iranian President Mahmoud Ahmadinejad, who has cut off trade ties with Denmark and is threatening to do the same with other European countries where newspapers reprinted the offensive Danish cartoons. A major Iranian newspaper even says it will hold a contest for the best anti-Jewish Holocaust cartoons in a totally unrelated tit-for-tat escalation of the dispute.

Most German papers on Wednesday agree that the current situation is becoming increasingly dangerous and that Ahmadinejad is using the crisis to gain political capital in Muslim countries. The general consensus is that he hopes to create support for Tehran in the international dispute over Iran's nuclear program. These days, Ahmadinejad has few friends even in his backyard, but the brouhaha over the Muhammad cartoons, which depict the worst stereotypes of Muslims could fuel enough anti-western sentiment for other regional powers to join Tehran's team.

In an editorial running under the headline, "Round Two: the Holocaust Cartoons," the leftist Die Tageszeitung writes: "That hurts," an Iranian newspaper is responding to the Danish Muhammad caricatures with a competition for the "best Holocaust caricatures." The Muslim lobby group the Arab-European League has already shown what the prize-winning entries might look like: On its Web site, it features a cartoon of Holocaust victim Anne Frank in bed with Hitler. "Write this one in your diary, Anne." Such tactlessness leaves the TAZ cold. "If the altercation continues at this level, the stomach of any person sensitive to history will soon be churning," the paper writes. For the Iranians, the caricature battle provides the perfect opportunity to shift attention away from its nuclear dispute with the West. "The Iranians' intent is clear," it continues. "They want to strike the West with their own weapons and denunciate their double standards. The western defenders of absolute freedom of speech now have a real problem. It's doubtful that the European newspapers that reprinted the Danish caricatures will now do the same with the Iranian cartoons. But if they take their own rhetoric seriously, they will have to."

The Financial Times Deutschland looks back at the publication of the caricatures by Denmark's Jyllands-Posten newspaper and sees an idea that backfired badly. "Now that seven people have died and thousands have stormed the embassies, it is, of course, even easier to fight for the freedom of the press and against fundamentalism," writes the paper. But one could also have the idea that freedom of the press and speech were intended as tools that could be used by the weak against the authorities and not an instrument to be used by idiots against a country's minority population. "Jyllands-Posten has discredited this value in the same way that the Islamists who incited the mobs in Iran and Lebanon have discredited freedom of religion." The paper sees two losers in this scandal: western societies, which will again unjustly be labeled as arrogant; and the overwhelming majority of moderate Muslims, who will now be thrown into the same pot as the extremists."

The center-right Frankfurter Allgemeine Zeitung looks at the financial implications of the conflict. "The state-sponsored boycott of Danish products represents an escalation -- not because the trade of Danish and Iranian goods is of any particular importance, but because the European Commission, in the interest of quieting down the unrest, warned (Iran and Muslim countries) against taking that step," the paper opines. Second, Iran is trying to send a message of intimidation to the European Union: "Take a look, this is what happens to those who do things that displease us." It is, of course, correct that in the face of the protests European politicians are calling for restraint and dialogue. "No reasonable person wants to aggravate the conflict, which has qualities of a clash of cultures and could spiral out of control and harm the political and economic interests of Europe (and the West in general)," the paper writes. "But what happens if the call for restraint goes unheard? The Iranian regime shows no interest in restraint."

The conservative Die Welt notes that there's one similarity between the Muslim world and the earlier Soviet bloc: It fears free and spontaneous demonstrations. "Anyone who is taking to the streets in Tehran, Sanaa or Damascus is being sent there." Indeed, the presence of so many Danish flags -- not exactly a common commodity at your local bazaar, indicates the protests were long in the planning. Then the editorial points to Iran's radical and opportunist president, who is using the crisis to build political capital. "In the outrage over the caricatures, Iranian President Mahmoud Ahmadinejad sees an opportunity to garner the support of the Arab world," the paper writes. "Arabs, in particular, are skeptical of the Shiite Iranian's claim to power and they view the idea of Persian nuclear missiles at their backdoor as a danger. Iran knows this." At the very latest, Tehran realized this at the last meeting of the International Nuclear Energy Agency -- where a broad united front, with the inclusion of many Muslim countries, against Iran's nuclear plans is possible. But the caricature conflict could hinder that. "As Ahmadinejad promotes himself as the protector of the faithful, he is also trying to divide the camps in the nuclear dispute," the paper comments. "In the end, he would like to see the entire Muslim world supporting Tehran in the nuclear question."

The left-leaning Berliner Zeitung notes that the Iranians have to pick on the Jews because most Europeans have become desensitized to jokes about Christianity -- they just don't care anymore. The only way of getting them back is the "activate anti-Semitism, the one evil that can still outrage us." For Europeans and, especially, Germans, mocking Muhammad and the Holocaust are two very, very distinct things. There's no mathematical clarity in the differentiation, but rather one of historical experience. It's hardly surprising that the Iranian's have chosen Jews as their targets. "They are the most vulnerable and their state has to hold its ground in the Muslim world." Now, the paper concludes, "the clash of cultures is being played out on the backs of the Jews -- they're paying the bill for Europe's bold opinions."