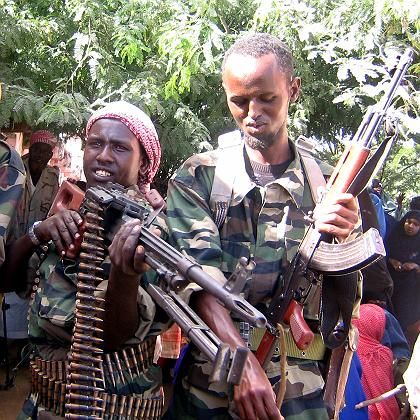 Members of the Islamic militia posing with their guns during an anti-Ethiopia rally in the Somali capital Mogadishu in October.

Ethiopa's military offensive against the Union of Islamic Courts, which holds the Somali capital Mogadishu and much of central and southern Somalia, is a dangerous act of aggression that could lead to a protracted war and even strengthen the Islamists, according to German media commentators who see the conflict as opening up a new battlefield in the American-led global war against Islamic extremists.

The UIC -- which seized Mogadishu six months ago -- has introduced law and order to the capital and much of southern Somalia for the first time in 16 years. But other countries accuse the UIC of links to al-Qaida, charges it denies. Somalia and Ethiopia -- a mainly Christian nation -- have a history of troubled relations and Islamists have long called for a holy war against Ethiopian troops supporting the Somali transitional government. The United States State Department has signaled Washington's backing for Ethiopia by noting that it had "genuine security concerns" arising from the Islamist gains in Somalia.

"The war that has broken out at the Horn of Africa will be hard to contain. It is unlikely that the intervention of Addis Ababa can lead to a victory over the Islamists.

"The Ethiopian army is well-equipped and one of the largest on the African continent. But even if it beats the Islamists on the battlefield -- it will fail to destroy the political base of the Union of Islamic Courts which has won a lot of support among the population because it offers an alternative to the despotism of the warlords who have been wrecking Somalia for years."

"Some of these warlords are now on the side of the Somali transitional government, which considerably reduces its credibility. The more heavily Ethiopia intervenes, the more this plays into the hands of the Islamists. They can then easily slip into the role of good guardian protecting Somalia from an external enemy."

"Bombs on airports and artillery fire only increase the chaos. Instead of isolating the Islamists, the international community should quickly get the warring parties to the negotiating table. The Islamists are so strongly entrenched in the country that there can no longer be a political solution without them. The Americans might not like that but they should accept it. Otherwise it will take a very long time for the guns to fall silent in Somalia."

"Washington is supporting the transitional government to prevent an Islamist victory. But the USA is employing the wrong means. It is supporting warlords who are hated among the population and the Americans believe they can use Ethiopia as a proxy to avoid having to use their own troops. That is simply idiotic. Ethiopia is Somalia's archenemy, partly because of a territorial conflict. If Ethiopian troops enter Somalia it will drive even moderate Islamists into the Islamists' camp."

"Why should all this interest us? Because Europe isn't an Island of the Blessed. A regional war at the Horn of Africa and the emergence of a new area of retreat for terrorists threatens our own security. That's part of globalization too."

"The international community has scored a point in the dispute over Iran's nuclear program."

"Iran could theoretically halt one-fifth of the world's oil exports if the government switched off oil supplies and blocked the Strait of Ormuz in the Persian Gulf. But it's unlikely Iranian President Mahmoud Ahmadinejad will do so. If he did he would inadvertently strengthen the very loose alliance among the powers of the Security Council and Germany. But more than anything else, he would hurt his own people: Iran depends on oil export revenues. Ahmadinejad, who recently suffered a defeat in local council elections because he can't keep welfare promises, will therefore hardly dare to shut down a source of oil money."

"Scare tactics don't work, especially if the threat is repeated without being carried out. The Security Council isn't blameless in this respect, but this time it has managed to chalk up a win in the battle for credibility: the sanctions are mild, even Russia can live with the ruling that nuclear technology can no longer be exported to Iran. Nevertheless, the UN resolution has led Tehran to discredit itself."

"Travel restrictions for a handful of experts won't impress the regime in Tehran but the trade restrictions applying to nuclear technology are not so marginal that they are insignificant for Iran's nuclear program."

"One can only guess the number of projects that will not come to fruition and the extent of investment in Iran that will not take place. It's definitely greater than Iran's propaganda is admitting, and it will hurt. The economic costs will hurt, as will being politically exposed. A leadership gripped by the old Persian ambition to be the hegemonial power in the Gulf cannot be indifferent to that."

"The UN resolution is a sign of credibility and an indication that there are limits to what it will put up with. We shall see how united the Council is and how vigorously the resolution will be implemented -- after all, Russia is Iran's nuclear technology supplier."

"One would wish that the rulers in Tehran heeded the Pope's appeal for goodwill, good sense and moderation to avoid deepening disputes. If Iran really is only interested in the civilian use of nuclear power, then sensible action and moderation will lead them straight there. If they are interested in other things, in power, supremacy and Islamism, the appeal for goodwill fall on deaf ears."

Süddeutsche Zeitung writes: "The sanctions the Security Council has imposed after prolonged wrangling may be soft but they come at the most unsuitable time possible. They help President Ahmadinejad, who has only just suffered an electoral setback. Now everyone has to support him when he says: 'We're really going to go for it now'. The moderate conservatives and the reformers who aren't interested in a confrontation with the West will have to howl with the wolves."

"The sanctions also provide the president with a cheap alibi for economic difficulties. If inflation accelerates, if promised welfare fails to materialize, he can blame the international community. The sanctions were also tailor-made to meet the demands of the Russians, without whom no resolution was possible."

"The council's decision will increase disappointment in Iran about the weak EU and will speed up Tehran's shift towards Asia."