Over 1 million people took to the streets of France on Tuesday as students, union members and leftists marched against new labor laws introduced by Prime Minister Dominique de Villepin. A nation-wide strike severely limited train, plane and bus service across the country with some scattered violence occurring on the streets of the French capital. Police sought to control the protesters with water cannons and some 240 people were arrested according to the Associated Press. Protest organizers estimate that over 3 million people took part in the some 250 protests across the country.

The Tuesday demonstrations mark an intensification of the pressure being placed on Villepin -- whose law would allow employers to fire workers under the age of 26 with no reason during their first two years on the job -- to negotiate a compromise solution. Interior Minister Nicolas Sarkozy on Tuesday suggested suspending the law to allow for negotiations while Villepin continued to resist withdrawing the law as protesters are demanding. He is hoping the law will encourage employers to hire more young people and thus reduce the 22.3 percent unemployment rate faced by those under 26.

The center-left Süddeutsche Zeitung, having spent much of the last week reflecting on the goings on in France, takes a step back from the specifics of the current protests to examine the state of politique in the country as a whole on Wednesday. It's not optimistic about what it sees. "At the beginning it was just a conflict over an employment law, now it's become a government crisis, and if it continues for a little while longer, then France will experience a crisis of state." The paper sees the country hopelessly split between the right and the left, with both sides more concerned about scoring political points than about the well-being of the country as a whole. "The socialists have only joined the demonstrators this time out of opportunism, without having any ideas of their own to reduce unemployment." The shocking part, the paper says, is that President Jacques Chirac, elected with an unprecedented 80 percent majority four years ago, has become completely helpless in the face of the series of crises France has faced in the past 12 months. "Never has a president, never has a government, done so little with such a large majority."

The left-leaning Die Tageszeitung, takes a more activist approach, seemingly wishing it were at the front lines of the protests in Paris. With nothing all that controversial going on in Berlin at the moment, the paper has to settle for calling for the resignation of the French government. "It has created new uncertainties and injustices for young employees. After four national days of protest  the French leadership has only one single possibility to end the conflict: They have to withdraw the law." While much of the recent attention has been focused on Prime Minister Villepin as the author of the law, the paper argues that Sarkozy and Chirac, too, are to blame. After all, Sarkozy's own labor market proposals weren't much different from Villepin's. And Chirac created the government in the first place. That, though, is just the beginning. "Reactions to yesterday's protests have to come from other European capitals and from Brussels," the paper writes. Let the revolution begin ... .

The right-leaning Die Welt, which often comes across as pining for the day when workers just shut up and leave the thinking to their employers, sees the strikes as little more than whining for a world that no longer exists. The basic tone of the piece -- which looks at strikes in France, England and Germany this week -- is, "globalization is happening, get used to it." What is everybody striking against? "Against the changes currently taking place in the living standards within Western industrialized countries." A "virus of denying reality" is spreading throughout Europe, the paper argues. It's not the systems that are too rigid, rather "now we can see that it's the people who are inflexible."

The financial daily Handelsblatt, finally, looks at what the strikes mean for President Chirac. No matter what happens, the paper points out, Chirac will be the loser. Should he capitulate to the protesters and withdraw the law, Villepin would likely resign, endangering any chance Chirac has of "improving on his rather meager list of accomplishments as head of state." If, on the other hand, Villepin manages to weather the storm, it will be virtually impossible to introduce any further reforms to the labor market that the two had been planning, "because the social climate in the country will remain poisoned for the foreseeable future."

The German press loves bashing US President George W. Bush and usually, they find it not terribly difficult given the consensus on this side of the Atlantic that US foreign policy since Sept. 11, 2001 has been a complete disaster. But the recent US-wide debate on American immigration law is not proving to be quite as clear cut -- and it is producing a deep split in the Republican Party.

On the one hand, there is a Republican fraction -- to which Bush belongs -- which would like to see the estimated 11 million illegal immigrants currently in the United States be granted work visas with an option of becoming full citizens later. A bill reflecting this viewpoint -- supported by Democrats led by Senator Edward Kennedy -- was passed by the Republican-controlled Senate on Monday. 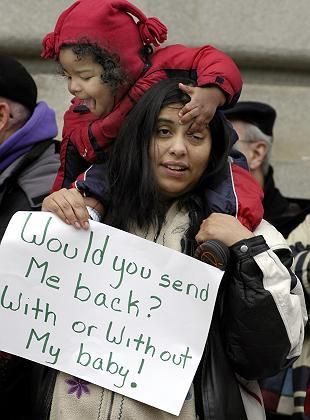 Friday saw marches in support of illegal immigrants across the United States.

But a second group of Republicans would like to see illegal immigration cracked down on in the form of strong measures taken to prevent it. This group -- which helped push a bill through the House of Representatives in December -- would like to see illegal immigrants criminalized and sent home. The two laws will now have to be reconciled. Many conservative Republicans are criticizing the proposed reform as a slippery slope towards an amnesty for illegal immigrants and -- given the fact that fully 11.7 percent of the US population was foreign born in 2003 -- as a threat to the national identity of the USA.

An editorial in Germany's economic daily Handelsblatt emphasizes that the issue is a challenging one for American conservatives and is creating a rift between the "defenders of national security and of the American identity" and "those conservatives with close ties to business who see immigrants as a vital source of cheap labor for the US economy." The editors themselves tend towards the latter position, which they term "liberal-pragmatic," pointing out the contradictory or even hypocritical character of conservative, identity-based arguments. "That middle-class conservatives fear for their American identity even as they take for granted that the cheap gardener is part of the 'American way of life' is one of the contradictions characteristic of this debate," the paper writes. The editors argue emphatically that "Congress should follow the best of the American tradition and show the immigrants a pragmatic and humane path out of the shadows."

Left-leaning daily Berliner Zeitung takes the same pragmatic stance, pointing out that the massive contribution of illegal immigrants to the US economy is an undeniable reality. "Deport the illegal immigrants and the country would probably stop functioning," the editors write, going on to note that while they feel the reform proposal is laudable, polls show that the majority of US citizens does not support it. The editors conclude by speculating that House Majority Leader Bill Frist, thought by some to be a possible Republican presidential candidate in the 2008 elections, may propose an alternative reform measure that would enforce more rigid border controls and offer no aid whatsoever to illegal immigrants already in the country. "Frist thinks the revolutionary suggestions of others in his party are nothing but an amnesty for people who have broken the law. That these people are keeping US society alive is not something the senator cares about."

Editorials in two other German papers reflect not so much on the specific debate over efforts to reform US immigration law, but rather on the difficulties faced by the president and his party in general. Not only are Bush's poll ratings abysmal, but for the first time in his over five years in office, Bush has gotten rid of one of his closest aides, White House Chief of Staff Andrew Card. Card, who resigned on Tuesday, told the New York Times that he felt he needed to take responsibility for "everything that has not happened well."

"All Quiet in the West Wing" is the ironic title of an editorial on Card's resignation that appeared in Germany's Financial Times. The editors argue that developments such as the growth of the US deficit and the persistence of widespread violence in Iraq have "damaged the reputation and ideological credibility of the US president within his own electoral base." In the face of such challenges, Bush has failed to take appropriate action. Card's replacement, the paper argues, is not so much a "breath of fresh air" as a "reshuffling of the same old deck," indicative of the Bush Administration's defensive "bunker mentality." Nonetheless, the editors believe that President Bush may still make a comeback. "Bush still has three years in office," they point out, "and his role model Ronald Reagan was quite capable of making a new start after an initial low point at the start of his second term." Yet this would require a genuine change of direction, in the opinion of the editors, away from what they perceive as the US president's current lack of flexibility: "Bush's spin doctors have always emphasized how much value he places in consistency and loyalty. But these qualities are increasingly appearing as defects."

The editors of the center-left Süddeutsche Zeitung make much the same argument. In their opinion, Card's resignation was long overdue, given the string of recent political mishaps. "It's well known how strongly Bush resists change," the editors write, "especially when it's being urged from outside." While the decision to replace Card is clearly evidence of Bush taking action, the editors criticize that Bush has opted for "the most limited solution" rather than for a genuine revision of his larger political strategy, and suggest that such stubbornness does not bode well for his future poll ratings. "The president refuses to be deterred," the paper concludes. "He continues doing what he's always done, irrespective of whether his party or the electorate think well of it or not."