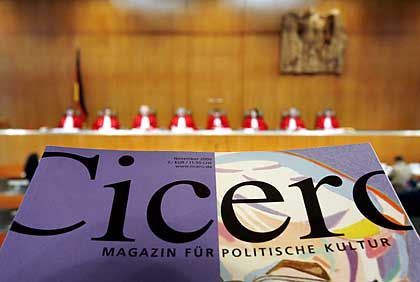 The offices of German political monthly Cicero were raided by the police in 2005. Now Germany's highest court has decided the raid was unconstitutional.

A court decision upholding journalists' right to protect their sources has been welcomed as strengthening the freedom of the press in Germany.

Germany's Constitutional Court ruled on Tuesday that journalists cannot be legitimately accused of betrayal of state secrets for publishing classified information obtained from informers. The decision was made in the context of a legal case prompted by the police searching the offices of German political monthly Cicero in Potsdam near Berlin, in September of 2005.

Cicero journalist Bruno Schirra, whose home was also searched, had published an article quoting an internal document of the Federal Criminal Police Office or Bundeskriminalamt, Germany's version of the FBI, on al-Qaida leader Abu Musab al Zarqawi. The German public prosecutor's office argued that Schirra's decision to quote the document amounts to complicity in the betrayal of state secrets. Several prominent politicians, including former German Interior Minister Otto Schily, supported this argument during the immediate aftermath of the police raids.

The Cicero case prompted a protracted debate on the nature and possible limits of freedom of the press in Germany. The Constitutional Court's ruling was welcomed by German newspapers Wednesday.

"It is to a frenzied attempt to discipline 'the press' that we owe the renewed confirmation of the limits of the freedom of the press by the Constitutional Court. The publication of state secrets has not been a punishable crime since 1979 -- provided that other personal rights are not violated. But in legal practice, journalists were increasingly often accused of complicity in the betrayal of state secrets.

"In their efforts to identify 'traitors' close to the authorities, investigators focused more and more often on the recipients of classified information. They invoked superior state interests in order to bypass the press's constitutionally guaranteed right to protect sources.

"The present case provided the Constitutional Court with a welcome opportunity to put an end to this practice: Preliminary proceedings against members of the press are unjustified if they primarily serve the purpose of identifying the informer.

"This does not mean that journalists are immune. They still commit a punishable crime when they use illegal methods -- such as theft or bribery -- to obtain information. Journalists too sometimes overstep the limits of freedom of the press."

"Once more it needed a decision from the Constitutional Court to remind authorities and legislators of the importance of civil liberties. In the recent past, the highest German court's decisions on electronic eavesdropping, criminal investigations and air security legislation have already repeatedly established that the state has overstepped the constitutionally determined limits to what it may do and violated the rights of its citizens. ...

"The true reason for the state's growing vagueness on basic rights ... has been formulated by former Interior Minister Otto Schily of the Social Democrat Party. Schily argued that, in the age of international terrorism, the state needs greater room for maneuver. But while it is certainly one of the central tasks of the state to guarantee the security of its citizens, the message sent by the Constitutional Court was clear: When it is a question of balancing security and liberty, basic rights must not suffer. They are the basic standard for both legislators and prosecutors."

"The decision is the attempt to re-establish a fundamental right. The judges are trying to restore the practical value of this right. They're not limiting themselves to emphasizing the relevance of journalistic confidentiality in a general way. They're telling the police, the prosecutor's office and the courts to interpret the norms of criminal law and security legislation in light of freedom of the press. From now on, raiding editorial departments and private homes to obtain the identity of a source will be prohibited. Freedom of the press has been newly strengthened.

"Following this decision, the legal situation in Germany will be like that in Switzerland, where journalists who refuse to identify their sources are protected from legal persecution. Germany's highest court has ensured that investigative journalism can no longer be automatically regarded as instigating or abeting the betrayal of state secrets, as has often been the case in the past. Of course, the verdict is not intended as a privilege allowing journalists to practise their profession more easily, but is rather a contribution to the proper functioning of democracy. A democracy in which scandals are swept under the carpet is not a good democracy."

Business daily Handelsblatt writes: "It was a good day for the magazine Cicero and for freedom of the press in Germany. ... Cicero's editor-in-chief Wolfram Weiner has triumphed over the surveillance state. ... The criminalization of journalism is now at an end. Thank you, Cicero! Thank you, Constitutional Court! ...

"The verdict has finally brought legal certainty. But freedom of the press is still being threatened. In the offices of bureaucrats, plans for new surveillance mechanisms are constantly being hatched. Why are the telephone conversations of journalists not protected from electronic eavesdropping like those of lawyers or priests, for example? ...

"There is still much to be done to ensure the ongoing safety of freedom of the press. The Constitutional Court's verdict stresses the importance of free media for the well-being of democracy."