As the North Sea storm "Kyrill" wreaked havoc on the streets of Europe on Thursday, Germany's political landscape was shaken up by a different gust coming from the south. Bavaria's governor of 14 years, Edmund Stoiber, ended weeks of political scandal by announcing that he would neither seek another term at the helm of Germany's most southern and economically prosperous state nor as head of the Christian Social Union (CSU) -- the Bavarian sister party of Chancellor Angela Merkel's Christian Democratic Union (CDU). 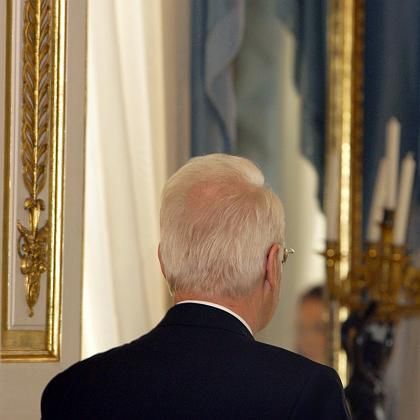 His resignation comes as a victory for a grassroots movement within the party that has recently found an attractive figurehead in politician Gabriele Pauli, who first called for the abdication of "the King of Bavaria" last autumn. Too complacent to recognize his own fallability, Stoiber didn't react fast enough when it became public that his ministry had tried to spy on Pauli -- and as soon as approval ratings plummeted, the inner-party revolt gained strength.

Now the only question left open is who will succeed Stoiber when his term ends next September. Bavarian Interior Minister Günther Beckstein and Economics Minister Erwin Huber have already divided up the leadership of Bavaria and the party amongst themselves, but Horst Seehofer, Germany's Agriculture Minister, has also made public his bid for the party leadership.

The conservative daily Die Welt writes of how unbearable the past few weeks must have been for the "nervous over achiever" and "intellectual":

"He understands his own position and the position of his party, which doesn't want to crash because of him. The CSU has much -- some even say everything -- to lose because it's moving on a mountain-high level where it's easy to get dizzy."

"Stoiber's mistakes bear no relation to his achievements or his downfall. He was one of Germany's most successful state governors and has governed Bavaria well for the past 13 years. Bavarian success has increased in all areas that it decided to invest in: education and security, social life and high technology. The way they pushed him aside is as unprecedented as it was disreputable -- and it will likely be used as a model in the future. This is a ghost story -- not a harmless one but an evil one."

Despite the fact that he never really did anything wrong, the business daily Handelsblatt describes how Stoiber became weighted by the undeserved label of being "one of the most horrible German politicians":

"His mistake was that he was in the media for too long. The voters are fed up with him and if they can't have new politics because society has become too complex for that, then they at least want new faces. Stoiber's tendency of holing up in his office did little to make things better either. Instead of reaching out, he surrounded himself with servile advisors. Many top politicians have suffered from this sort of reality loss -- including former chancellors Helmut Schmidt, Helmut Kohl and Gerhard Schröder."

"Nobody understood his political movements anymore, but his excellent achievements made him too complacent to notice that he'd been losing support along the way. At first, party member Gabriele Pauli was surprised to see how much traction she got with her anti-Stoiber messages. Pauli, who more or less came out of nowhere within the party, was suddenly spearheading a new movement that she didn't even know existed. It was a good image: this attractive, youthfully spirited female David against a white Goliath who has far more power but doesn't know how to use it correctly."

The left-leaning Berliner Zeitung considers Stoiber's downfall a reason for hope and a symbol of inner-party democracy. But the paper also sees reasons to worry about the future:

"Stoiber never thought about the end of his political career, so he never groomed a successor. He was always concerned about his legacy, but never with who would come after him. From the viewpoint of his party, this is the worst mistake that a leader like him -- someone who succeeds in achieving the strongest economy of any state in Germany -- could make."

"Because of Stoiber's ego, the CSU will be a party in transition for the next several years. Regardless whether Beckstein becomes governor -- or if Huber or Seehofer become party leaders -- none of these people will really bring anything new to the table. They will have to clean up after Stoiber first and then swiftly make way for a new generation. Ruling together with a party like that won't be easy for Angela Merkel. Soon she will have to deal with CSU politicians who need to prove that they can fight for Bavaria's interests as hard in Berlin as Stoiber did. For the CSU this may turn out to be a necessary, even beneficiary, period. But life in Merkel's grand coalition government in Berlin could grow a lot more difficult, and it could even quickly come to a standstill."