When it comes to its alleged nuclear weapons and what it intends to do with them, Israel likes to keep the world guessing. Hence it came as no surprise that Israel has denied a report that it is preparing for a nuclear strike on Iran's purported nuclear facilities -- a report which may serve Israel well as a means of psychological warfare, even if it makes the rest of the world's hair stand on end. 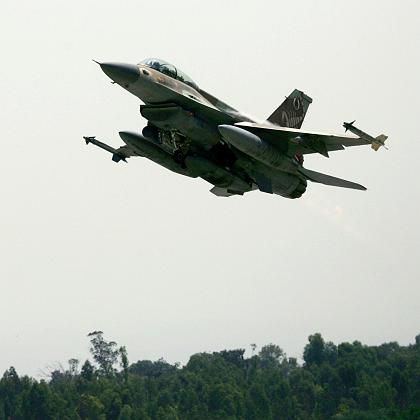 A British newspaper reported Sunday that Israel has drafted plans to strike targets in Iran with low-yield nuclear weapons. In this July 2006 file photo, an Israeli F-16 warplane takes off for a mission from an air force base in southern Israel.

The British Sunday Times reported that Israel had drawn up secret plans to destroy Iran's uranium enrichment facilities -- which are suspected of being part of a secret nuclear weapons program -- using low-yield nuclear weapons.

Two Israeli air force squadrons have been training to blow up an enrichment plant in Natanz using tactical nuclear weapons known as "bunker busters," the newspaper reported, citing Israeli military sources. Two other sites at Arak and Isfahan would be targeted with conventional weapons, it said.

According to the plan, a conventional laser-guided bomb will first be used to blow a shaft down through the layers of hardened concrete at the Natanz site. Nuclear warheads would then be fired into the plant, exploding deep underground in an attempt to reduce radioactive fallout.

The newspaper reported that Israeli pilots have recently been flying as far as Gibraltar to simulate the 2,000-mile (3,200 kilometer) round trip to Natanz. Three possible routes to Iran have been mapped out, including one over Turkey.

Israel has refused to rule out pre-emptive military action against Iran, along the lines of its air strike against Iraqs Osirak nuclear plant in 1981. However, many analysts believe Israel cannot destroy Iran's nuclear facilities by itself. The newspaper, which did not rule out the possibility that Israel was engaging in saber-rattling, also quoted sources as saying a nuclear strike would only be used if a conventional attack was ruled out and if the United States declined to intervene.

Germany's papers Monday expressed alarm at the report and called on the West to stand firm on Iran so that Israel would not feel pressured into taking matters into its own hands.

"It's not easy to believe Israel's denials (that it is planning an attack), because top Israeli politicians and military officers regularly threaten Iran with violence. Deputy defense minister Ephraim Sneh said in November he did not want to rule out a military option against Iran as "a last resort." In October Prime Minister Ehud Olmert sent a similar warning to Tehran. ()

"The Israeli public is being systematically prepared for a possible military strike against Iran's nuclear facilities. Hardly a day goes by without top politicians, generals, intelligence officers or security-political think tanks musing about military options. They evaluate possibilities and weigh up their consequences.

"They may argue over the details, but in one question there is a reckless consensus: that the Iranian regime can not be dissuaded from developing the bomb using diplomatic means alone."

"Israeli politicians have not ruled out a pre-emptive strike against Iran in theory, and the fact that Israel has already bombed a foreign nuclear installation, in Iraq in 1981 -- albeit with conventional means -- speaks for the validity of the Sunday Times' report.

"On the other hand, the obvious question is whether the article was deliberately planted in the media. Officially Israel is following a policy of ambiguity as to the existence of Israeli nuclear weapons. Recently, however, Prime Minister Ehud Olmert included the country in the ranks of the nuclear powers. Before that, US Defense Secretary Robert Gates had classified Israel as a nuclear power. Is the new report a new attempt to threaten Tehran with the bomb, without doing so directly -- and also to test the reaction of the West?"

"The headlines about Israel's alleged attack plans against Iran can be clearly seen as a weapon of psychological warfare. Israel profits from such news: It makes the Iranians aware of the consequences of their policies and puts the world under pressure to not simply accept Iran's nuclear program. ()

"It is irrelevant if the story is true or not. The only important thing is whether one believes Israel is ready to use force. The Israeli government has been making it clear to the world for months that it will not accept an Iranian nuclear bomb and will stop at nothing to prevent it. It is obvious that a military strike could be a last resort after other efforts have been exhausted. No state will simply look on as a regime which wishes its destruction arms itself. And Iran wants to wipe Israel from the map. Israel will act if the major powers fail to keep Tehran from developing the bomb. However, it is doubtful that the conflict could be solved with a single military strike (). A protracted and bloody conflict is much more likely.

"This in turn can not be in the interests of the Americans and the Europeans. For this reason, they should deter the Israeli government from acting by itself. This however means resolutely confronting Iran and, if necessary, acting against Tehran even without a United Nations mandate. In short: (The West) cannot allow Iran to acquire nuclear weapons under any circumstances."