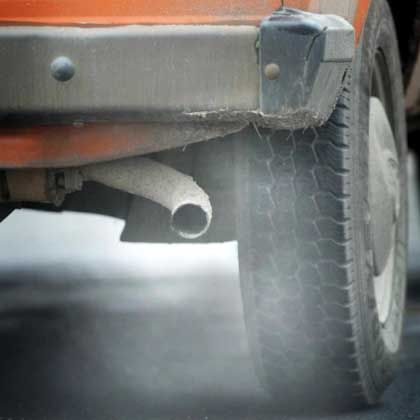 The EU proposes limiting the amount of CO2 emissions to 130 grams per kilometer.

The European Commission on Wednesday proposed binding rules that would force car manufacturers to produce vehicles that would emit less carbon dioxide. The plan would set a limit of 130 grams of CO2 per kilometer for cars sold or imported into the EU by 2012.

The planned binding caps have been proposed by the EU after the car industry failed to meet voluntary targets set nine years ago. They had pledged to reduce average emissions to 140 grams/kilometer by 2008.

The EU Environment Commissioner Stavros Dimas was forced to water down his original plans for a limit of 120 grams/kilometer following heavy lobbying from the car industry and Germany, which is home to car giants such as Volkswagen, BMW and DaimlerChrysler.

Although German Chancellor Angela Merkel had pledged at the beginning of her country's EU presidency in January that the environment would be one of her priorities, the fierce opposition from Berlin to Dimas' proposals would seem to paint a different picture. In a country with almost four million unemployed, protecting the car industry seems to be a higher priority than putting the brakes on global warming.

This view was reflected in the German press Wednesday, where the EU plan to impose binding limits is viewed with some skepticism.

The conservative daily Die Welt writes: "Politics has discovered a new enemy: It is the car, and in particular the German car. Popular and coveted throughout the world, it has now been enthusiastically declared a pollution-spewer and climate killer. Even though Europe's CO2 emissions only make up 0.56 percent of the global total, one could be forgiven for thinking that the German car industry carries the main guilt for global warming.

"(The market) decides if an idea catches on or not. ... Now consumers are beginning to reconsider, because human beings are adaptable creatures. And industry will find a way of building hybrid models or vehicles that run on hydrogen, that will meet consumers' transport needs, as well as being attractive to buyers and protecting the environment."

Center-left newspaper Süddeutsche Zeitung writes: "Climate protection is now catching up with Germans -- the manufacturers as much as the customers.

"However, the EU and its member states will have to look for other ways to make transport less damaging to the environment. In the end fuel efficiency in cars is not a question of how far a vehicle travels. It is about limiting traffic to a bearable level. If freight traffic continues to increase then all the efforts will be for nothing. The same is true if investment in public transport is not made an unconditional priority."

The center-right Frankfurter Allgemeine Zeitung writes that the row has dented Germany's self-image as a particularly environmentally friendly nation: "Germans consider themselves particularly environmentally aware and their government as ecologically exemplary  but now they are hearing from EU Environment Minister Stavros Dimas that they shouldn't get too smug about their ecological balance sheet. They have given themselves far too modest goals for the future. In particular they have not been ambitious enough in developing cars with lower emissions.

"Perhaps things haven't gone quite so far with the oft-touted 'reconciliation between economy and ecology.' The popularity of politicians who campaign on environmental issues starts to look shaky when they, like Dimas, present the population with the bills.

"What do (consumers) get when they spend more money on more expensive cars, drive slower, fly less often? They get angry with the politicians who expect them to do all this. That is why German politicians are happy to hide behind an EU environment commissioner who doesn't have to face an election campaign, and behind an industry that allegedly hasn't fulfilled its voluntary commitments."

The financial daily Handeslblatt writes that the CO2 emissions dispute between the EU and the car industry has become a "battle of beliefs": "Market-driven alternatives to the system -- such as trading emission rights or trying to influence demand -- are no longer being negotiated ... The time for a sensible exchange of views has passed.

"It is true that traffic is one of the biggest causes of climate change. But the impression that a reduction in emissions from cars could solve the environmental problem is wrong. Transport only accounts for a fifth of total CO2 emissions.

"The industry has little choice: it has to respect the demands and wishes of its customers. The buyer has the choice. If an attractive exterior and comfort play a bigger role than environmental compatibility then these priorities must be considered. Because it's no good offering fuel-efficient cars if nobody buys them.

"It has to become an expensive luxury to excessively damage the environment. And a progressive car tax could be the way to do this ... This type of taxation would set in motion a sustainable dynamic towards fuel-efficient cars and would increase the pressure on the big gas guzzlers ... If politicians then spent the income from the increase in taxes on infrastructure projects to avoid traffic jams, the environment would be helped twice over."