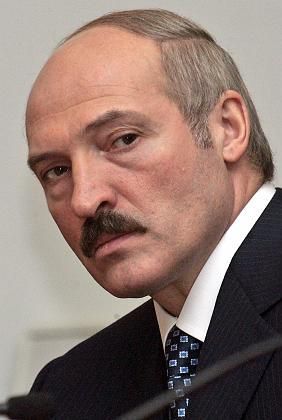 President Alexander Lukashenko is challenging Moscow over the new weapon of choice in the old Soviet bloc -- energy prices.

When Belarus President Alexander Lukashenko slapped a transit duty on Russian oil crossing his country to the west, he knew he was picking a fight with the biggest bully on the schoolyard. But he may not have realized that it would be seen -- at least in Germany -- as the last stand of a desperate dictator.

Lukashenko's move was a brash answer to Moscow's doubling of natural-gas prices on Jan. 1. Russia has been trying to wean its former Soviet satellite nations from cheap natural gas and oil, energy which Russia claims is "subsidized." However its methods have been thuggish and nakedly political, as when Russian Gazprom shut off its supply of natural gas to Ukraine on New Year's Eve 2005 after the smaller nation refused to pay a steep price increase.

Lukashenko knows Moscow needs pipelines across Belarus to reach lucrative energy markets in western Europe, so he decided to jack up the price of transit. "If they are drowning in petrodollars and other currency income (in Moscow) and have decided ... to place us in conditions worse even than Germany and other European countries, then let's ask this rich Russia to pay us for our services," an angry Lukashenko said on TV this week.

The catch, as German papers point out today, is that Lukashenko seems to have no friends outside of Moscow. The left-wing daily Die Tageszeitung writes:

"The dictator is fighting a lost cause, because the special conditions from Russia for its low energy prices have up to this point kept Belarus stable. The doubling of the gas price puts huge pressures on Lukashenko  He won't be able to avoid raising the price of gas for ordinary citizens, and this may be a delicate proposition. A majority of Belarussians have so far enjoyed a low but stable standard of living. If that changes, people may grow frustrated and take to the streets.

"Moscow has clearly decided to breathe new life into the old union between the two governments -- to Russia's benefit, naturally. Which means the small neighbour will be incorporated (into the Russian Federation). The days of a sovereign Belarus are numbered."

"(Lukashenko) has desperately thrown down the only gauntlet Moscow will notice: the geographical and geopolitical importance of his country. If Russia wants to sell oil and gas to the West, it will have to deal with a stubborn Belarus  But Lukashenko is fighting a lost cause  He's been declared 'Europe's last dictator,' by US Secretary of State Condoleezza Rice, and there will be no European option or support from the West for him. The price for that support would be democratic reform -- which he doesn't want.

"So the only question that remains is what will happen first: Lukashenko's coming round to Moscow's position on the union of the two states, which would mean an incorporation of Belarus into Russia; or a majority takeover of the Belarus pipeline company Beltransgaz  by the Russian monopolist Gazprom. In both cases the results will probably be the same."