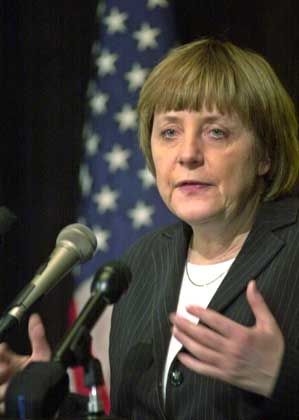 Angela Merkel pictured during her February 2003 visit to Washington as a member of Germany's political opposition, offering support for  Bush's Iraq policy.

Angela Merkel sets off on Thursday for her debut in Washington as Germany's first female chancellor. From the outset, it appears that Merkel, who is popular in Washington, will get more preferential treatment than her predecessor, Iraq war opponent Gerhard Schröder. She'll be shacking up in the fancy presidential guest house, and she gets three hours of face time with George W. Bush. There will be red carpets and the smiles will be real. And though she won't offer to send any troops to Iraq, she will pledge to expand Germany's efforts to help rebuild Iraq.

"Merkel has chosen the ideal gift for her visit," writes the leftist daily Die Tageszeitung. "Her offer to extend German aid to Iraq does not cost much but is being seen as a friendly gesture." The paper notes that some in Baghdad have complained that the quality of the police training provided by the Germans is inadequate, but the gesture isn't really meant for Iraq, anyway -- it contributes to the conciliatory tone Merkel wants to foster with Washington. "Bush can see the offer as support for his course, and he may even be prepared to accept Merkel's surprisingly clear criticism of Guantanamo for this." The paper concludes that this double strategy of criticizing Guantanamo while at the same time increasing Germany's support for rebuilding Iraq, will help her win points both at home, where people truly do want good transatlantic relations, and in Washington.

The Financial Times Deutschland expresses high hopes for Merkel. Three years ago, the paper writes, she made a smart political investment. In the run-up to the Iraq war -- when tensions between US President George W. Bush and then-chancellor and war critic Gerhard Schröder were running high -- Merkel visited Washington and, as parliamentary opposition leader, criticized the German government's policy and Schröder's "anti-American tirades." She also declared support for Bush. "Tomorrow, Merkel, who is now chancellor, will harvest the fruit of what she sowed. Just as he hasn't forgotten that Schröder campaigned with anti-Bush slogans, he hasn't forgotten that Merkel supported him in a difficult time. In Washington, many perceived Schröder as being impulsively anti-American, but Merkel is seen as a purely business-like politician. Even if she sometimes disagrees with the White House, she is someone who knows that good trans-Atlantic relations are in Germany's best interest."

Still, Merkel's visit will also be an exercise of managing expectations on both sides. "Many are hoping for a new beginning with Merkel's visit," writes the business daily Handelsblatt. "But expectations should be oriented towards what is doable." The paper argues there can be "no return to a cozy, affectionate relationship." But the editorial maintains that the "democracies in North America and Europe should at least make sure they don't drift further apart." It argues that what matters most to the Bush administration is the "narrowest possible consultations about the political agenda." The next test of the relationship, it says, will be the nuclear crisis with Iran. "In America people are already asking themselves how far the Germans will go in an escalation of the nuclear dispute. It's a question Merkel will soon have to answer. Only then will Merkel be able to demonstrate how she can balance her grand coalition's domestic considerations against trans-Atlantic cooperation."

The center-left Süddeutsche Zeitung notes that with many European leaders in their political twilight years, Merkel is going to become Washington's most important contact in the European Union. "Blair and Chirac are nearing the end of their time in office," the paper writes, "and Berlusconi is fighting for survival." It adds that the problems in the Middle East and Iran can only be solved with the United States and Europe working together and that Berlin will play an important role. Merkel's challenge, the paper's editorialist writes, will be to "find a balance between politically necessary closeness and critical distance."

Both the Süddeutsche Zeitung and the Financial Times Deutschland comment on Merkel's deft balancing act with Washington. On the one hand, she did visit the Bush administration to offer her support in the run-up to the Iraq war. But during the recent election, she quietly distanced herself from the Bush administration -- eschweing the traditional campaign visit to Washington made by the Christian Democrats' top politician. A week before her current visit to Washington, she criticized the US for its controversial Guantanamo terror prison, saying it couldn't remain open forever. Yet even as she has distanced herself, she has also sent a conciliatory message, describing the German-American relationship as "friendship," and calling for a new deepening of political ties.

The Berliner Zeitung takes note of a small factoid the other papers have overlooked on Thursday: Merkel is the name of a small town in Texas. "On Friday, Merkel is meeting with George W. Bush in Washington," the paper writes, "But when Bush was still governor of Texas, he ruled Merkel." Of course, he probably won't recall Merkel -- after all, it's a small town with only 2,500 residents, four restaurants, three backeries and a small newspaper called the Merkel Mail.

No sooner did Vienna take over the European Union presidency this month then Austrian Chancellor Wolfgang Schüssel said the EU constitution -- in spite of two devastating referendums in the Netherlands and France last year -- was "not dead, but in the middle of a ratification process." He called for suggestions on how to revive it, and French President Jacques Chirac this week joined voices calling for elements of the constitution to be "cherry-picked," and worked into existing EU agreements. This cherry-picking proposal from Paris took Berlin by surprise, and German Foreign Minister Frank-Walter Steinmeier said Chirac's remarks has not "made things easier."

Chirac focused on three institutional rule changes in the draft constitution, including references to an EU diplomatic service and a stronger role for national parliaments in scrutinizing European legislation. That may sound innocuous, or even boring; but the problem with the constitution last May was that ordinary Europeans felt left out of the process -- the Dutch "nee" and French "non" were seen as major snubs to arrogant Eurocrats, who should think twice before carrying elements of the rejected constitution over into European law.

That, at least, was the attitude of the center-left Süddeutsche Zeitung on Friday. "Of course it's feasible to adorn the utterly deficient (existing) European agreements with segments of the draft constitution," its editors wrote. "But that would abandon the constitution's actual goal, which was to make an expanded EU governable, more transparent, and more democratic."

The paper added that cherry-picking would just give other countries -- Holland, Poland, Britain -- an excuse to declare the constitution overhaul dead. At best, adopting bits of the draft constitution would need more public discussion and time; but time is something that Chirac -- "a man without a future," writes the paper, "who wants to cobble together a hasty European legacy" before he leaves office in 2007 -- doesn't have.

The centrist Berlin-based daily Der Tagesspiegel, on the other hand, takes a sharp dig at Wolfgang Schüssel's ambition to revive the constitution. "The classic in this genre is called 'The Night of the Living Dead,'" writes the paper. "The film lasted 96 minutes and is the story of Barbara and Ben's unlikely battle against the zombies, the undead. The EU's struggle with its own constitution, on the other hand, has lasted four years and it still isn't clear ... whether the project is alive or dead." But the paper throws theoretical support behind Chirac's idea. "The French president is right," declare the editors. "Nothing more than organ transplant is possible after death."