Some within Germany's Social Democratic Party (SPD) have complained recently about the center-left party's relatively low profile since becoming the junior partner in Angela Merkel's "grand coalition" government. Merkel's Christian Democrats (CDU), many whined, were stealing the spotlight. This weeks's burst of media focus on the SPD, though, is likely not exactly what they had in mind.

On Monday, SPD Party Chairman Matthias Platzeck threw his party into disarray by announcing that he was stepping down from his position after only 146 days due to health problems. In recent weeks he had suffered numerous illnesses, most of which were stress related, resulting in one of the shortest tenures ever for an SPD leader. Platzeck says he will retain his duties as governor of the state of Brandenburg and Kurt Beck, the newly re-elected governor of Rhineland-Palatinate, will take over leadership of the party. But despite the quick transition from Platzeck -- who had been considered a likely candidate for chancellor in the 2009 elections -- much of the media coverage on Tuesday is focusing on how the incident shows just how thin the leadership of the SPD really is.

The center-left Süddeutsche Zeitung dedicates the first three pages today to the power shift at the top of the SPD. In one piece, the paper examines five party leaders as potential chancellor candidates and finds them all wanting. In its lead editorial, the Munich daily argues that Platzeck's resignation is just one more indication that the party is in crisis. For much of its history, the SPD leadership has been stable, with one long-serving chairman after the next. But since 1991, the leadership has been a revolving door. "The merry-go-round  is symptomatic for the condition of a party that has lost its footing." It wasn't all that long ago, the paper recalls, that the SPD had a number of able-bodied politicians in its leadership, all vying for the top spot. "The party is suffering today from a depletion of personnel; it is sorely missing the generation that (in the 1960s) was pushed into the arms of the Greens." Kurt Beck, the piece concludes, is not the man to turn the trend around.

The center-right Frankfurter Allgemeine Zeitung is much more complimentary of Beck and sees the quick change in personnel at the top as little more than a blip on the SPD radar. The party, writes the paper, turned a potentially damaging crisis into an offensive. "With Kurt Beck as Matthias Platzeck's successor, the party's clout has grown." The paper feels that Platzeck was too docile and followed former Chancellor Gerhard Schröder too tamely to be able to lead the party out from under his shadow. Beck, on the other hand, does not have that problem. Furthermore, he has recently been strengthened by winning the regional elections in Rhineland-Palatinate. "Beck is self-confident enough to make it clear to the chancellor that he is the only SPD negotiating partner when it comes to important issues."

Tabloid Bild Zeitung likewise devotes much of its political coverage to Platzeck on Tuesday. It is also the only German paper to have an interview with Platzeck's successor Kurt Beck. Beck says he is hopeful that his leadership will last longer than many of his predecessors since 1998 -- there have been five different SPD heads since then -- and said he is fully behind the grand coalition with Merkel's conservatives. When asked about whether he would run for chancellor in 2009, Beck responded: "The party leadership agrees that the party head has the right of first refusal on this question."

The financial daily Handelsblatt agrees with the Süddeutsche Zeitung that the SPD in Germany is experiencing a deep crisis. Indeed, the paper argues that the SPD's problem is more one of social democracy in general. "That the social state finds itself in upheaval is really not news anymore. But the SPD continues to have incredible difficulties facing that fact," the paper writes in its front page editorial. The problem is that the SPD itself is split in two. On the one hand, the party's grass roots remain nostalgic for the good old days of the economic miracle and the nanny state whereas the party elite in Berlin and in the state capitals are confronted day after day with empty government coffers. "Between the social-nostalgic basis and the economic-pragmatic party elite, an abyss is opening."

Finally, the leftist Die Tageszeitung on Tuesday argues that with Platzeck's departure, the SPD is also bidding farewell to its programmatic ideals. Platzeck had tried to redefine the party program in a time of social democratic crisis across the European continent, and even wrote a contribution for Der Spiegel which appeared on Sunday, just hours before he stepped down. But trying to establish a clear center-left profile these days is difficult. "It would be no surprise were successor Kurt Beck to simply forego establishing a clear party platform."

A Lost Year for France 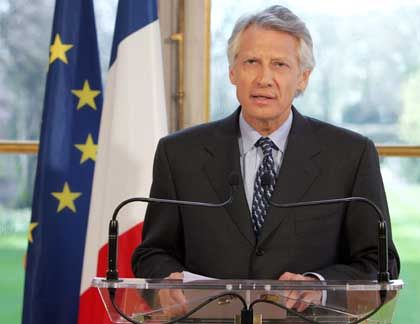 Villepin had hoped the "contrat première embauche" (CPE)-- which would have made it easier for employers to hire and fire workers age 26 or under -- would spur job growth. The premier wanted to stick out the massive nationwide protests, but Chirac clearly felt the political repercussions for his conservatives could be too great. Villepin's presidential hopes for next year's election appear to have been gravely damaged by the student-organized demonstrations.

Many observers on Tuesday see the decision by the French government to withdraw the controversial law as tantamount to a political earthquake in Paris. Some are asking why Villepin wasn't forced to resign on Monday. Others are pointing to the whole episode as further evidence of France's unwillingness to tackle true reforms needed to keep the country competitive amid increasing globalization.

The business daily Financial Times Deutschland said that Villepin had been forced to offer an "unconditional surrender" that isn't softened any by the fact that the premier did not throw in the towel himself on Monday. "The result is the same whether Villepin stays or goes: until the parliamentary and presidential elections in 2007 no further reforms that deal with the labor market, education or the bloated state apparatus are possible," opines the FTD, pointing out that the French are so mobilized at the moment that the government cannot risk their ire with unpopular measures. "The next year is a lost year for France." That is bad for the country and tragic for Villepin who has just seen his presidential ambitions "buried" after trying to force the reforms on an unwilling public.

The conservative Frankfurter Allgemeine Zeitung agrees with the assessment. "For Chirac and Villepin that is defeat across the board," writes the paper, delving into the ongoing internal battle within the conservatives to succeed Chirac. The debacle surround the employment contract will certainly hurt Villepin and aid his rival Interior Minister Nicolas Sarkozy, believes the FAZ. But in the end, France will be the loser: "Whatever form this power struggle takes, until the next election France will be paralyzed. That will affect domestic reforms, but it will also limit the ability to act abroad."

The center-left Süddeutsche Zeitung also believes Villepin's political future is in tatters, but he has only himself to blame: "The head of government was a victim of his own arrogance. His cardinal mistake was thinking up the law with his closest advisors without any public discussion. Villepin wanted to survive the crisis by outlasting the protests." The paper calls this political defeat for Chirac just as disastrous as the rejection of the EU Constitution by French voters last year. Both Chirac and Villepin misjudged the country's mood: "When the French hear the word reform, they become distrustful."