With promises of "bold action and big ideas," US President Barack Obama used his first speech to Congress to send a clear message of hope in the face of the economic crisis. Observers on both sides of the Atlantic were quick to home in on the detail of his Tuesday night speech, keen to evaluate his strategy on the deepening crisis. 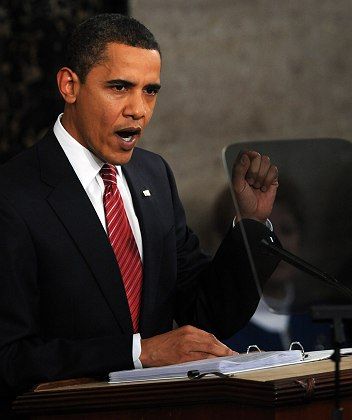 US President Barack Obama: "We will rebuild, we will recover, and the United States of America will emerge stronger than before."

Key to his prime-time message was the need for strength and resilience: "While our economy may be weakened and our confidence shaken, though we are living through difficult and uncertain times, tonight I want every American to know this: We will rebuild, we will recover, and the United States of America will emerge stronger than before."

Obama, who has been in power for just over a month, called on Americans to retain belief in his conviction for change, urging people to view the economic crisis as a unique opportunity for reform. He also made no bones about who was to blame for the extent of the crisis: his predecessor, George W. Bush.

"My budget does not attempt to solve every problem or address every issue," he said. "It reflects the stark reality of what we've inherited -- a trillion-dollar budget deficit, a financial crisis and a costly recession. Given these realities, everyone in this chamber, Democrats and Republicans, will have to sacrifice some worthy priorities for which there are no dollars. And that includes me."

But though German editorialists writing in Thursday's newspapers were impressed by Obama's words, many warned that it is too soon to celebrate. The new president, they say, still has his work cut out.

"The American president succeeded in his balancing act: In his speech to Congress, he did not spare the American people the bitter reality about the economy but he also fed hopes of a stronger, better America. The crisis, which has already brought hard times to many Americans, does indeed offer the chance to correct an erroneous trend."

"That starts with the millions of home owners who, sometimes frivolously, sometimes under pressure from credit sharks, bought houses and flats beyond their means. And it reaches the realms of the management of Wall Street banks where misguided incentives in executive pay encouraged risky business practices."

"The challenge for Obama is not just to restore the supply of credit to companies and consumers ... . At least as important will be to create a new regulatory framework for the markets. It must be tight enough to effectively prevent crises but also broad enough to preserve necessary freedoms."

"Obama is looking for a path between realism and optimism. For weeks he has been telling the American people that things will get worse before they get better and that doing nothing would be catastrophic ... ."

"For the world, much depends on whether Obama can really stoke confidence. There will be no end to the recession in America if the spiral of fear is not stopped. The hope inspired by the charismatic president is enormous. But the economic reality of the first month of his presidency was terrible. From unemployment to the business climate, every economic signal is worse than when Obama took office."

"At the moment, the president still has one invaluable advantage: his popularity remains intact. Americans do want the change that he has promised ... But public confidence will at some point wear out. What needs to be done is both short-term and unpopular: Obama and his people have to quickly say what they plan to do with America's bankrupt banks. Only when that fire has been put out can the United States begin to move out of the crisis."

"In his speech to senators, representatives, constitutional court judges, and guests of honor, Obama delivered an explanation of the balancing act he has been engaged in since his election and taking office. He has repeatedly hinted that he wanted to take a risk."

"The role model of the "Yes we can" president is Franklin D. Roosevelt, who laid the foundations of the New Deal program within his first hundred days of taking office. Big in their visions but pragmatic in the implementation, they are entirely comparable. Obama, like Roosevelt, inherited a desolate economy from his predecessor, one which was suffering from the consequences of a banking and financial crisis. And he too knows how to present complicated problems in simple language."

"Committal in tone and clear in his message, Obama said that the state can certainly play a positive role in the lives of Americans -- and thereby stepped out onto the tightrope."

"The president, with the insistency of a modern Roosevelt, knows how to convey to his people that the reforms will only work if everyone works together ... He has no choice but to take big risks. For all that, Obama held a big, optimistic speech that creates a sense of hope that he will not take a tumble during his tightrope performance."