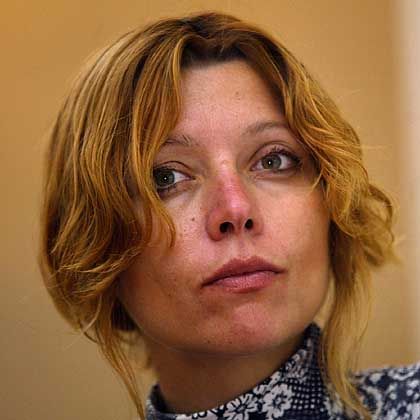 Turkish author Elif Shafak was acquitted on charges of "insulting Turkishness" on Thursday.

The charge is not one you'd see in most European Union countries: "Insulting Turkishness," it is called. But that's what Turkish novelist Elif Shafak, one of the EU aspirant's most popular writers, had been charged with. On Thursday, though, an Istanbul court acquitted Shafak following a one-and-a-half hour session, concluding that she had committed no crime.

The case had drawn a lot of attention from the EU and has highlighted Turkey's difficult road to membership. The 25-member club, which appears set to accept Romania and Bulgaria in January, has repeatedly criticized elements of Turkish law such as the one that provided the basis for the charges against Shafek. A report on Turkey's progress toward joining the EU will be presented in mid-October.

While Turkish nationalists protesting outside the court building had to be contained by riot police after the verdict was announced, many in Turkey have expressed relief over the verdict. "We want a country where people are not interrogated because of their novels," said Muge Sokmen, Shafak's publisher, according to the Associated Press. The AP also quotes Shafak's husband Eyup Can as saying that the trial is "a shame not just for her but for Turkey."

Even if the trial did not receive much coverage in the German press, the verdict had a few of Friday's commentators heading for their keyboards. An editorial in the center-left daily Berliner Zeitung notes with satisfaction that "the court in Istanbul needed only a few minutes to acquit the Turkish writer Elif Shafak," stressing that the trial was "absurd" in so far as the accusations were not based on statements made by Shafak "in essays or on discussion panels," but rather on words uttered by the protagonist in her new novel. "It's a good sign that the court reached a decision so quickly," the commentator notes. She immediately adds, however, that Turkey shouldn't get too smug: What is ultimately needed is for the Turkish government to eliminate the law that made the trial possible in the first place. The law in question, paragraph 301 of the Turkish penal code, has a history of being used to silence debate over "Turkey's attempted extermination of the Armenians" during the years before the First World War, the commentator points out. Such legally sanctioned censorship is incompatible with EU membership. "The European Union has rightly demanded changes to the Turkish penal code," the piece concludes.

The trial against Shafak comes at a time when many Westerners are convinced that predominantly Muslim countries are bastions of religious fanaticism and intolerance. Notwithstanding the recurring calls for a "dialogue with Islam," many seem already to have made up their minds that such a dialogue cannot be conducted in a fruitful way. This, in any case, is the position of a commentary in Friday's center-right daily Die Welt-- one that takes a look back at the Muslim outrage over the comments on Islam made by Pope Benedict XVI last weekend. The much-invoked "dialogue with Islam," the paper writes, is nothing but a "farce." The paper claims that the words "We need to show more respect for Islam" have become a catchphrase in the West and that this formula is always used when "criticism of Islam triggers Islam's violent reflexes." The "feelings" of Muslims -- the commentator himself places the word in quotation marks -- are "nothing but a modern form of religious dictatorship," the piece argues. Islam is compared by the commentator to medieval Christianity. "Just as, during the Christian Middle Ages, only church members were considered human, orthodox Islam considers no one human but those who are Muslim," the paper says. The commentator then claims that "strongly religious Muslims" are in fact nothing but "mental clones" and victims of "indoctrination." After waxing eloquent on Islam's "problematic history" and accusing Muslims of "refusing to confront it," he concludes that "we can expect a renaissance of religious dictatorship in which every so-called prejudice and every putative lack of respect is responded to with threats and attacks."

Left-wing daily Die Tageszeitung warns against precisely this kind of rhetoric and makes a plea against painting all Muslims with the same broad brush. After all, even if there has been a resurgence of faith in the Muslim world since September 11, 2001, they're not all fundamentalist, the paper writes. "The majority of  Muslims have not discovered a blueprint for bombs in the Koran," the commentator writes, "but rather a manual on how to lead a better life." Many young Muslims have found ways of reconciling their religion with Western popular culture. Instead of treating "reborn Muslims" as if they were all bigots and potential terrorists, Europeans need to understand that "the struggle is not one between religious faith and the tradition of the Western Enlightenment, but one between terrorists and their enemies."

An estimated 10,000 people gathered outside the Hungarian parliament on Thursday in what became the fifth consecutive night of protests prompted by Prime Minister Ferenc Gyurcsany's admission that he had lied to voters about the catastrophic state of the Hungarian economy. The protests followed the example of those on Wednesday night by being largely peaceful. The chaos and street battles witnessed in Budapest earlier in the week appear to have died down for good.

But aside from the civil unrest it has prompted in Hungary, Gyurcsany's admission that he "lied morning, evening and night" also raises questions about the pressures that European Union membership entails for new member states from Eastern Europe. Hungary was one of 10 states to join the EU on May 1, 2004 -- two more Eastern European countries, Bulgaria and Romania, look set to join the club in a little over three months. A number of commentators are scratching their heads about Europe's future as a result.

"Budapest is burning," the center-left daily Süddeutsche Zeitung observes, adding that "these flames are not just a symbol of public outrage -- the unrest also shows that the road ahead for the EU's prospective member states is more painful than expected." In other words, similar scenes are to be expected in Bulgaria and Romania: "The expansion of the EU will lead to further crises. That's why it would be a good idea not to force the entry of Bulgaria and Romania into the EU," the paper says. In the 1990s, the paper recalls, the idea was that new members would reform themselves under EU supervision -- "a risky game," the commentator insists. A tough love approach might be better. Indeed, the paper calls for "applying especially strict standards to Bulgaria and Romania," forcing them to battle their problems of "corruption and organized crime" by "tightening the thumbscrews." Such a policy may seem harsh, and "Bulgarians and Rumanians may find it unfair," but the EU has "no other choice," the paper concludes.