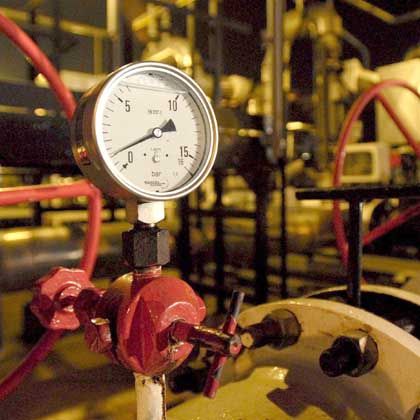 Europe is fretting over its energy supplies following Russia's decision on Monday to halt oil exports to western Europe because of a pipeline dispute with Belarus.

German Chancellor Angela Merkel has indicated that Germany may rethink its plan to phase out nuclear power generation. Media commentators in Germany are furious with Russia.

"The Kremlin has implemented a package of measures that is likely to push the Belarusian economy to the brink of collapse. The country's scarcely reformed industry is highly dependent on the drip of what had to date been cheap Russian energy supplies.

"The EU, which has scaled down its contacts with Belarus to the bare minimum, may be pleased; a dictator who brutally suppresses opposition members and journalists in his country is having his oxygen supply turned off.

"But the Russian move again shows how uncompromisingly hard the Kremlin is in enforcing its economic interests. Riding the wave of high world market prices for oil and gas, the Russian leadership has developed frightening arrogance.

"For the EU, which still regards Russia as a strategic partner, the warning signs are unmistakeable."

"The case of Belarus harbors a lesson for western Europe: Russia is once again showing how irresponsibly it is handling its increased global role. The world's second largest oil exporter and most important gas producer should be aware that trust and reliable supplies are the most important assets in the energy industry."

"It's precisely this asset that Moscow is putting at stake in its row with Belarus. And in the wake of the conflict with Ukraine, the Kremlin is again proving that it's prepared to use energy supplies as a political weapon. That is why Europe must lessen its dependence on Russian oil and gas despite all Moscow's assurances of friendship."

"And Russia must accept the rules on dispute settlement enshrined in the European Energy Charter. The Russian mechanism of simply turning off oil and gas supplies or doubling prices whenever there's a row is more than impertinent."

"The mild winter is ensuring low oil prices, and the Russian supply outage could quickly be covered by other suppliers. The row between the two former Socialist brothers will probably be resolved long before Germany's strategic oil reserves are threatened."

"Germany and other industrial nations can count the unscrupulous Putin among their best friends because they can pay him enough dollars. But it's a different for smaller countries."

"The supply of gas or oil to western Europe is no longer secure. It only takes a little dispute between Moscow and a former Soviet brother republic to interrupt the flow of energy.

"Moscow has already made clear that it wants to gain even more influence over Germany's energy supply. Russia will do all it can to achieve this. The German energy companies and the German government should prevent this."

"The Europeans must act together -- not just because that makes them stronger. Also because Europe increasingly has to counter energy-hungry competitors like China for example. The next step will be to get more diversification among our supplier countries and especially among the supply routes. The controversial Baltic pipeline promoted by former chancellor Gerhard Schröder is starting to make more sense."