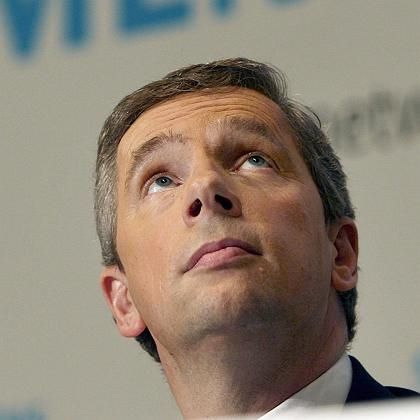 Siemens head Klaus Kleinfeld has taken a lot of heat for the bankruptcy of BenQ Mobile.

What with German Reunification day coming up on Tuesday, Germany's political and economic leaders likely thought they were heading for a nice, relaxing long weekend. But then last Friday rolled around, with the news that BenQ Mobile, the company that took over Siemens's ailing mobile phone division last year, was going belly up. Even worse, 3,000 jobs in Germany were in danger.

The resulting outcry has been impossible to ignore as a number of politicians spent the weekend flinging accusations of misconduct at both BenQ and Siemens. Over the weekend, in fact, rumors began to circulate that Siemens and its Asian partner had even planned BenQ's demise from the get-go. Indeed, the Süddeutsche Zeitung reported on Monday that BenQ Corp. had recently asked Siemens to redirect €50 million in outstanding payments to its headquarters in Taipei, but quietly dropped that request when Siemens said it preferred to make the payments directly to the German subsidiary.

Siemens head Klaus Kleinfeld denies any wrongdoing. In an interview with the mass-circulation tabloid Bild on Monday, he claims his goal "had always been to create a solid future for the Siemens mobile phone business." Siemens sold the handset division because its managers "were convinced by BenQ's assurances that the German sites would be sustained and even strengthened." Kleinfeld considers BenQ to have broken its promise, and is now considering possible legal action against the former partner.

Even German Chancellor Angela Merkel didn't shy away from piling on Siemens late last week and called on the company to realize its "special responsibility" within German society -- a call the electronics giant now seems to have taken to heart. On Monday, Siemens announced a €30 million relief fund to help workers who are losing their jobs as a result of the BenQ bankruptcy. To further benefit the relief effort -- and their public image -- Siemens board members further agreed to forego an intended 30 percent salary raise for themselves, thus bringing the total funds available for damage control to roughly €35 million. The money will likely be used for vocational training and other programs intended to provide its disenfranchised employees with new perspectives.

With that, the sale of its mobile phone division to BenQ has become even more expensive for Siemens. A little less than a year ago, Siemens AG made the sale, but had to sweeten the deal with €413 million worth of additional investments -- more than previously cited, as the Süddeutsche Zeitung disclosed on Monday. BenQ itself also managed to lose €840 in the year following the sale.

The daily tabloid Bild Zeitung on Monday chose to focus on the reaction by Siemens to the growing uproar and applauded the executives' decision to forgo their own pay raise. "When things are running badly, top managers have to slog away rather than cash in," the paper wrote. The paper has long been running a campaign to get Germany's top managers to be more transparent about what they make, and used the Siemens board decision to once again appeal to industry executives to serve as role models in good times as in bad. The paper even offered up a verdict in its own little trial against Siemens: The management, it wrote, has come clean with its personal sacrifice and harsh words directed at the former Taiwanese business partner.

The tabloids haven't been alone in their crusade against corporate greed. Indeed, the left side of Germany's political spectrum took up the baton against what were termed "locusts" -- meaning foreign investors speculating in German companies. Hardly surprising then that the center-left daily Süddeutsche Zeitung on Monday also emphasized the moral and political implications of being a top business executive, and warned that "people feel it when managers  lose sight of society's values in their hunt for good numbers." In abstaining from their own pay raise in light of the circumstances, Kleinfeld and his colleagues "show that they have understood their social responsibility." This sort of behavior could help restore many people's faith in the free market, the newspaper muses, keeping them away from radical parties that use the fear of capitalism to garner votes.

The left-leaning Die Tageszeitung was less forgiving. The paper laughed at BenQ Mobile head Clemens Joos' urgent plea for consumers to buy more of his company's mobile phones in order to support the insolvent subsidiary's 3,000 workers whose jobs are now in peril. The paper says the plea is ridiculous, because "it is not the consumer who is responsible for the sad BenQ-Siemens chapter." Instead, the paper claims it was "out-dated products and bad management," as well as a singular focus on investor-driven profit margins, that prompted Siemens to rid itself of the troublesome handset division rather than rehabilitate it.

The Financial Times Deutschland said on Monday that the German economy has a new bad guy. After Deutsche Bank head Josef Ackermann long played the role of the rich evil-doer, Klaus Kleinfeld has now knocked him off as Germany's most-hated corporate boss. But the daily isn't entirely convinced by this great denunciation, since the blame cannot be placed squarely on Kleinfeld's shoulders. The paper singles out his predecessor and current chairman of the board Heinrich von Pierer for blame as well. Von Pierer, the paper points out, "is a well respected manager and a favorite among politicians." Which, when it comes to the mistakes made in Siemens, is ridiculous. "It is absurd," the paper writes, "for people in politics and the public to pretend like there is a good guy and a bad guy in the upper echelons of Siemens. That comes across as pretty phoney."