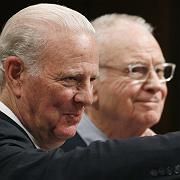 Former US Secretary of State James Baker (left) and Lee Hamilton, a Democrat member of the House of Representatives, co-chaired the Iraq Study Group that has now presented US President George W. Bush with sobering conclusions about his foreign policy.

On Wednesday, United States President George W. Bush received a detailed report penned by the Iraq Study Group, a commission formed by Bush one year ago and co-chaired by former Secretary of State James A. Baker III and Lee Hamilton, a 34-year member of the US House of Representatives who was also vice chairman of the 9/11 commission. The report, which describes the current situation in Iraq and offers recommendations for US policy, states bluntly that the current US strategy for Iraq is "not working." The report also calls on Bush and his administration to place a stronger emphasis on diplomacy, with the the goal of stabilizing Iraq and withdrawing most combat troops by 2008. "The United States must build a new international consensus for stability in Iraq and the region," the report argues.

German papers on Thursday comment extensively on the report in editorials and commentaries. Most papers agree that the Iraq Study Group Report represents a major blow to Bush's reputation. While several commentators express doubts as to whether the report's recommendations will be followed by the Bush administration, all agree that its publication heralds the beginning of a more sober and realist phase of US foreign policy than that commonly associated with Bush's first years in government. Several papers refer to critical remarks on the situation in Iraq made by the new Secretary of Defense Robert Gates, the successor of Donald Rumsfeld.

"It's an old maxim of American foreign policy. When the president and the Congress agree on their aims and the means for realizing them, and when they have the support of voters, then the probability that their policies will be successful increases. That's obviously not (or no longer) the case for the Bush's administration's Iraq policy. The skepticism voiced with regard to the prospects in Iraq -- by the new Secretary of Defense, no less -- speaks volumes."

"Though the commission has no elegant exit strategy to offer, that doesn't seem to be the issue any longer anyway. What's at stake now is the ability to acnowledge the realities on the ground -- realities for which the United States is largely responsible. It's become a question of re-shuffling the priorities in the Middle East and accepting the inevitable."

"It would be a mistake to believe that US foreign policy will now strictly adhere to the recommendations of the Baker Report."

"A plan is a plan -- no more. ... What Baker and Hamilton have written doesn't necessarily have to come true -- neither in Iraq nor in the increasingly gloomy White House."

"The commander in chief, the gallion's figure of the conservatives, the strong leader of the nation -- he must surely feel patronized by the report's authors. But he himself created the commission -- without suspecting that it would become so much more powerful."

"The results of the report amount to Bush being stripped of his authority. The report marks the end of Bush's 'carry on' rhetoric, no longer presenting a choice between victory and defeat, but only different degrees of humiliation. That makes Bush look bad: He can't take back his words. The president is notoriously stubborn -- a man driven by his convictions. He also has a keen sense of power and powerlessness. That's why Baker isn't presenting Bush with a way out, but forcing him to admit to a devastating defeat."

The left-leaning Berliner Zeitung in the German capital writes:

"Neither (Incoming US Defense Secretary Robert) Gates nor the Iraq Study Group have shown a genuinely viable way out of the dilemma in Iraq. It's clear that a withdrawal of troops would make the country spiral into chaos -- the state of Iraq would probably disappear. But no one can say whether the diplomatic offensive suggested by the report promises better results. Still, the fact that a flexible realist like Gates has taken the place of an ideologically blinded and strategically incompetent man like Donald Rumsfeld is reason to hope that the United States will be able to find a way out, one step at a time."

"Gates has pointed out that the next one or two years will decide whether or not the United States -- and the Middle East -- will be able to withdraw from the ruinous adventure in Iraq without suffering too great losses. Those just happen to be the two years that Bush has left in order to improve his profile in the history books. Were those books to be written now, they would have to tell of a president who led the superpower USA into the greatest military humiliation since Vietnam -- a humiliation that has brought the country's reputation and its political influence down to the lowest levels since World War II. It would mean taking stock of the complete bankruptcy of the foreign policy pursued."

"The price to be paid for such a consensus is often that of not making important strategic decisions and resorting to formulaic compromises and hollow phrases instead."

"This is also the weakness of the report itself, since the commission recommends neither a new offensive nor the withdrawal of troops ('cut and run'). Instead, it proposes an intermediate solution, one that is somehow supposed to represent an improvement with regard to the status quo. You could call it 'cut and stay' -- withdrawing and staying at one and the same time."