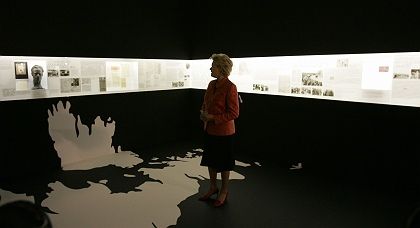 Erika Steinbach, head of the Federation of German Expellees, looks at the new exhibition in Berlin.

One wonders what all the fuss is about. The exhibition, after all, is relatively modest -- occupying three rooms in the Kronprinzenpalais located on Berlin's Unter den Linden boulevard. Inside, one sees informational plaques dedicated to the forced re-settlement of the Finnish Karelians, forced by the Soviets to head westward during World War II. One sees luggage belonging to Italians forced out of Yugoslavia in 1944. There's even documentation regarding the expulsion of the Armenians from Turkey in 1915.

But the exhibition -- called "Forced Paths: Flight and Expulsion in 20th Century Europe" -- also has a large section on the post-World War II expulsion of some 12 to 14 million Germans from Poland and other Eastern European countries. In other words, say critics, the exhibition seeks to portray Germans as victims of World War II and to rewrite history. Plus, they point out, there's already an exhibition dedicated to the German expellees across the street in the German History Museum.

An esoteric debate for historians? Hardly. It's an issue that has repeatedly strained Germany's relations with Eastern European countries and has particularly rankled next-door neighbor Poland. Indeed, soon after his election last fall, conservative Polish President Lech Kaczynski made it be known that the ongoing efforts of the German group Federation of Expellees -- led by the vocal parliamentarian Erika Steinbach -- to build a permanent center in Berlin devoted to post-war German expellees was unwelcome.

And in late July, he commented on the current exhibition: "Polish foreign policy, of course, is dedicated to pursuing Polish interests," Kaczynski said on Polish radio. "The exhibition about expulsions which will open on (August 10) in a prestigious building in the Federal Republic of Germany is very definitely not in the interest of Poland. The relativization of the responsibility for World War II is not in Poland's interest."

The ongoing debate is not primarily about the historical facts. When the Soviets under Stalin agreed with the Western Allies to move the Polish border west to the Oder and Neisse rivers, millions of Germans who had long lived in areas now belonging to Poland were forced to leave. As many as 2 million died on the trek westwards and those who arrived in Germany had to live for years in temporary shelters and even in former concentration camps due to post-war housing shortages.

Primarily, opponents of the Center Against Expulsion -- which is the preliminary name Steinbach and her group have given to their pet project -- worry about the context within which German expellees are presented. A handful of protestors were on hand on Thursday to make sure their side of the story got press as well. "An image of history," read the anti-exhibition flyers tossed into the scrum of journalists crowded around Steinbach to hear her opening address, "is being communicated which portrays Germans as the victims of flight and expulsion without adequately presenting the fact that flight, expulsion and resettlement at the end of World War II was the consequence of the aggressive, expansionist and destructive policies followed by the Nazis."

It is a criticism that has dogged Steinbach's group for years -- and one that she seems particularly sensitive to. In comments to a group of foreign journalists on Wednesday, she took pains to emphasize the European nature of the exhibition and never tired of mentioning that historical expertise was provided by experts from a number of European countries including Czech Republic and Hungary. A Polish expert withdrew from the project due to pressure faced at home.

And the exhibition itself -- which will run through October 29 -- is rather modest. The fate of the German expellees is presented along with that of eight other groups that were victims of forced resettlement in 20th century Europe. The result is a lot of text, a few items on display -- the centerpiece being the bell from the ship Wilhelm Gustloff which sank in January 1945 killing 9,343 Germans fleeing Poland -- and not a lot of clarity. If anything, it seems as though Steinbach's group is trying to keep the issue alive without stepping on any toes.

But the true motivation for the €500,000 exhibition is obvious enough and Steinbach herself admits that it is a means to an end. "I believe that our exhibition will be an important step in the direction of opening a center in Berlin documenting the expulsion," she said on Wednesday. Germany's current government under Chancellor Angela Merkel supports the idea of setting a "visible symbol" dedicated to the expulsions, but have yet to agree on what that should be. 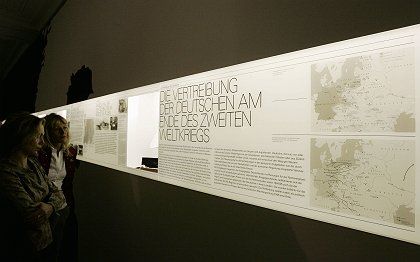 And Steinbach's group has made it clear it won't be deterred by criticism from outside Germany. "It is important that Germans understand the fears (of Poles) and respects those fears," she said. "But that shouldn't result in inaction. There is a need in Germany to confront our entire history and a part of that is the story of the expellees."

Perhaps. But Eastern European fears are not so easily quelled. The Polish papers on Thursday ramped up their anti-German rhetoric to mark the exhibition's opening. "The biggest difference (between Germany and Poland) in their approach to history," writes the weekly Wprost, "is that in Poland and in other countries, one thinks primarily about those things the Germans would rather forget."

Or, as Piotr Buras, a Polish expert on German-Polish relations, told SPIEGEL ONLINE last autumn: "The idea of a (Center Against Expulsion) is very suspect for Poles. The Germans need to understand that there is a large problem in German-Polish relations and she is called Steinbach. If the Germans don't see that, then it is a clear sign that they aren't all that interested in good relations with their neighbor."