World War II suicide attacks are normally associated with Japanese kamikaze pilots. But newly-released wartime archives reveal that the British also had a potential suicide bomber among their ranks -- and his chosen target was Hitler. 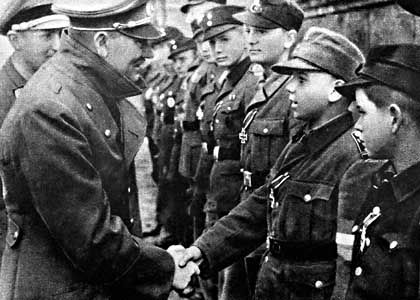 British double agent Eddie Chapman volunteered for a suicide mission to blow up Hitler, according to a report in the British daily The Times Tuesday. Chapman, who was codenamed "Zigzag" by the British, was a British professional criminal who was recruited as a spy by the Nazis but who later became a double agent.

Chapman was serving a sentence for burglary in a prison on the island of Jersey when the Nazis invaded in June 1940. He was recruited by German military intelligence, the Abwehr, and parachuted into the UK in December 1941 -- where he defected to the British intelligence agency MI5.

He told MI5 he wanted to return to Germany to work as a double agent and assassinate Hitler with a bomb at a Nazi rally.

According to the newly-declassified MI5 file quoted by The Times, Chapman's case officer Ronnie Reed warned him the attempt would be suicidal. "Whether or not you succeeded, you would be liquidated immediately," the file reports Reed as saying.

"Ah, but what a way out," Chapman is said to have replied.

Chapman said that his German spymaster was planning to take him to a Nazi rally once he had completed his British mission successfully. He would be placed in the "first or second row" near Hitler's podium, possibly dressed as a senior German officer. "I will assassinate Hitler," Chapman told Reed. "With my knowledge of explosive and incendiary material, it should be possible."

However MI5 rejected his offer to kill the German leader, for reasons which are still unclear. Historians believe it may have been because of the former safecracker's criminal past which did not fit with MI5's upper class culture. It may also have been motivated by fears of possible reprisals, or even because Hitler was thought to be more useful alive than dead because of his erratic behavior at that point.

Chapman returned to Germany as a double agent but was warned against undertaking any "wild enterprises" by his British spymaster, Colonel Tommy Robertson. Chapman was later awarded the Iron Cross medal by the Germans in recognition of the missions they believed him to have carried out.

Chapman survived his wartime adventures and died in 1997, having been pardoned for his pre-war crimes. His exploits are depicted in the 1966 film "Triple Cross" starring Christopher Plummer.

MI5 has now released 1,800 pages of documents relating to the Chapman case into the public domain, with the last of the files being put into the British National Archives last month.

Some historians believe that Chapman's German spymaster, Stephan von Gröning, may have been deliberately trying to use Chapman to assassinate Hitler. Von Gröning was opposed to Hitler, as were many German Abwehr intelligence officers.

A group of German army officers tried to assassinate Hitler, in a famous 1944 bomb plot led by Claus Schenk Graf von Stauffenberg. The July 20 plot, as it is known, failed, and Stauffenberg and around 200 others were executed.