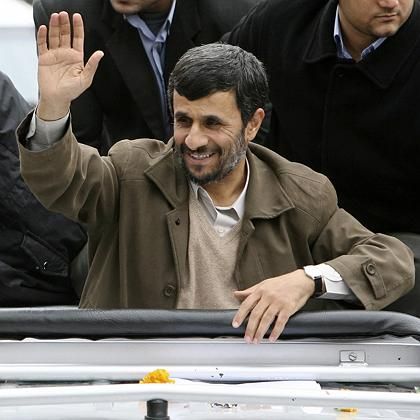 Growing up in Minnesota, one of my favorite things was going to the state fair each summer and watching the guy who would guess your weight within five pounds. If you fooled him, you won a stuffed animal.

Out here on the Persian Gulf, where small countries learn quickly how to survive large predators, theyve developed a similar skill: They can calculate a countrys power within five pounds, just by looking at it. If theyre wrong, they end up as a stuffed animal.

Right now, the Arab Gulf states are all sizing up America, their protector, and are wondering just how much Uncle Sam weighs in the standoff with Iran -- and whether it will be enough to keep Iran at bay.

Ive been at a security conference in the tiny Gulf state of Bahrain, attended by defense officials and analysts from all over the world, and all the buzz has been about the latest US National Intelligence Estimate on Iran. It has left every Arab and European expert Ive spoken to baffled -- not in its conclusions, but by why those conclusions were framed in a way that is sure to reduce Americas leverage to negotiate with Tehran.

The Gulf Arabs feel like they have this neighbor who has been a drug dealer for 18 years. Recently, this neighbor has been very visibly growing poppies for heroin in his backyard in violation of the law. Hes also been buying bigger and better trucks to deliver drugs. You can see them parked in his driveway.

In the past year, though, because of increased police patrols and all the neighbors threatening to do something, this suspicious character has shut down the laboratory in his basement to convert poppies into heroin. In the wake of that, the police declared that he is no longer a drug dealer.

Sorry, say the police. We have a very technical, legal definition of drug-dealing, and your neighbor no longer fits it.

Thats basically what has happened between the US and Iran -- just substitute enriched uranium for poppies. Now, Bush officials are trying to tell everyone: No, no, Iran is still dangerous. You have to keep the coalition together to get Tehran to stop enriching uranium. But in a world where everyone is looking for an excuse to do business with Iran, not to sanction it, weve lost leverage. Everyone in the neighborhood can smell it -- and it worries them.

Said Gary Samore, director of studies at the Council on Foreign Relations and a former Clinton administration expert on proliferation: The US N.I.E., by leading with the statement that Iran has halted its nuclear weapons program, has left the misleading impression that the danger has passed.

It has not passed, he noted, because Iran is still enriching uranium in violation of UN proliferation rules to which Iran had agreed (and testing long-range delivery missiles). Yes, it is still enriching below weapons grade. Iran says this is to fuel nuclear reactors to generate electricity -- but it has no such reactors. And to get that uranium enriched to weapons grade, all it has to do is keep running it through its centrifuges.

That is the hardest part of building a nuclear weapon, and Iran is still doing it, said Mr. Samore. Our ability to get strong international sanctions to halt that was already weak, but by declaring definitively that Irans weapons program had been halted, the N.I.E. has given the Russians and Chinese a good excuse to make sanctions even weaker.

As I have said before, Id rather see Iran go nuclear, and contain it, than have the Bush team start another Middle East war over this issue. But Id much prefer a negotiated end to Irans enrichment. Right now there is a silly debate: Should we negotiate with Iran conditionally or unconditionally on this issue. Wrong question. The right question is should we enter such negotiations with or without leverage.

If we sit down with the Iranians without the leverage of a global coalition ready to impose tighter and tighter economic sanctions -- should Iran not halt enrichment -- well end up holding a stuffed animal. The peculiar (obtuse?) way the N.I.E. on Iran was framed has deprived all who favor a negotiated settlement of leverage.

It was the C.I.A. doing its job of collecting intelligence really well and presenting it really badly, said Mr. Samore.

Now we have to depend on -- Oh, my God! -- President Bush to persuade the world to read the whole N.I.E. and see it in a balanced perspective. As Ive also said before: Some things are true even if George Bush believes them, but good luck getting anyone to buy that anymore.