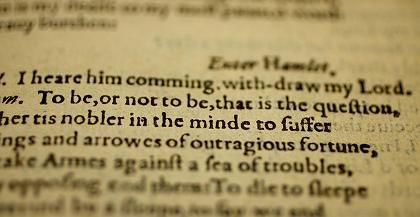 A little light reading for your average German.

Germans speak English. Almost all of them can squeeze out a few comprehensible sentences should the need arise. Even the ones that say they don't speak English, actually do. Should you pass a panhandler on the side of the road and shrug in confusion as he starts babbling away in German, he'll effortlessly delivery his spare change spiel in English. Or ask directions at a construction site, and the chances are the bricklayer will be able to semi-clearly tell you where you need to go. Indeed, the only ones who seem absolutely immune to English are bus drivers and bureaucrats -- but a pre-World Cup campaign is aimed at at least getting the transportation workers on the English bandwagon.

Why, then, do almost all Germans insist that they don't speak English when asked? They are, quite simply, a shy bunch -- they would rather you make an ass out of yourself annihilating the German language than the other way around. "I learned English in school, but it's not so good," you'll hear. They will then begin discussing esoteric grammar points or American literature in educated, fluent, witty English.

The linguistic wherewithal is hardly surprising. After all, it's the result of years of language classes -- most pupils start their foreign language study early in elementary school with English easily outpacing other European tongues in terms of popularity. Thousands of private English schools send teachers into thousands of German companies each day to disseminate the finer points of enigmatic, economic English. Add a healthy dose of Brit-pop, American rap and a nationwide addiction to Harry Potter, and it's virtually impossible to avoid knowing a handful of English words. A number of German companies even use English-language advertising slogans.

But it's their timidity that hurts most Germans when forced to put down their complete works of Shakespeare and actually speak the language. Perhaps more than most of us, they find it incredibly painful to risk imperfection. To make matters worse, they are surrounded on the north by Scandinavians who speak better English than most native speakers. And they ignore the southern Europeans; the French, Spanish and Italians make the Germans look like language prodigies.

In other words, when forcing your German hosts to wrench a few Anglo-phrases from the dark, backwaters of their brains, be kind. Compliment frequently. Nod and smile a lot. And be thankful it's not you trying to find a clear path through the Byzantine maze of German grammar and multi-syllabic locutions.