A steady chorus of honking rises from the heavy, chaotic traffic in the Ugandan capital of Kampala. Drivers are happy to cut corners and even basic safety rules are ignored if a shortcut presents itself. Three years ago, Joan Gwokyalya found herself riding on the back of one of the tens of thousands of motorcycle taxis in the city as her driver wove in between the cars and buses.

Suddenly, she was thrown to the ground. And her life changed dramatically.

A bus had slammed into the motorcycle, killing the driver instantly. Gwokyalya survived, but doctors had to amputate her left leg below the knee. "I had a tetanus infection that began spreading in my leg," Gwokyalya, who is now 25, recalls. She's sitting in the garden of the CoRSU Rehabilitation Hospital, one of the leading orthopedic facilities in East Africa. And the place where her life, badly disrupted by the accident, got back on track.

The CoRSU Rehabilitation Hospital in Kampala

In many developing countries, injuries sustained in traffic accidents are among the primary causes for amputations, along with diabetes, infections and tumors. Some are likewise born missing an arm or a leg, while others might be the victims of landmines. The World Health Organization (WHO) estimates that 30 million people living in developing countries require prosthetic limbs or other orthotic devices, but many are unable to afford them. Furthermore, many countries have a shortage of experts, material and prosthetic centers.

Recently, many specialists have begun placing their hopes in 3D printers, including those at CoRSU, where an orthopedic technician is scanning Gwokyalya's stump. Using a hand-sized device, he scans the site of the amputation, with the results popping up on a laptop screen in real time. Gwokyalya is attentively watching every movement. She's one of about 100 patients in Uganda who are taking part in a clinical study at the CoRSU hospital, which opened its doors in 2009 with the help of donations from countries around the world, including Germany. For the last two years, orthopedic technicians there  in cooperation with the Canadian NGO Nia Technologies and the University of Toronto  have been testing prosthetic sockets produced by a 3D printer.

Orthopedic technician Jenan Taremwa scans Gwokyalya's stump, with the data appearing digitally on the screen. The scan only takes a couple of minutes, but printing the socket takes longer than eight hours.

The socket, the part that connects the prosthetic limb to the stump, must be custom made for each patient. Traditionally, that has involved a complicated, time-consuming process involving the creation of a plaster mold. The ability to scan limb stumps and print sockets would help make the work of the four orthopedic technicians at CoRSU more efficient and enable them to help more amputees.

The technology is quite simple: Once the technician has scanned the stump, the 3D model is adjusted on the computer screen before being sent to the printer using specialized software. After a few hours, the printed socket is finished and can be connected to a plastic prosthetic limb provided by the Red Cross or another supplier.

Gwokyalya says that it only took a few hours to fit her new artificial leg. It wasn't her first prosthetic. She had bought her first one with money she had scraped together, but it was too heavy and too painful. Ultimately, she stopped using it in favor of crutches. But her new prosthetic is much lighter and also feels better. "I was happy because I could walk again," she says. The fact that her new leg was one of the first in Uganda to have come out of a 3D printer was, for her, beside the point.

Between Hope and Hype

Advances in 3D technology have long since begun radically changing medical care. Doctors can create digital models of organs and tumors, and they can print splints for arms or fingers. Last summer, researchers at the university ETH Zürich produced the first-ever soft artificial heart made of silicon using a 3D printing procedure, though it only lasted for 3,000 heartbeats. In the future, "living ink"  made of a patient's cells and polymers  might enable the printing of human tissue and organs.

When it comes to prosthetics, the technology is much simpler  and it also promises several advantages over traditional methods. Simply scanning stumps rather than encasing them in plaster has the added benefit of being less traumatic for children. In developing countries, meanwhile, technicians can visit remote areas and conduct scans on-site. Instead of hauling around a plaster model, all they have to do is bring in the digital 3D model stored on their computer  or send it online. In theory, it can then be digitally adjusted and printed anywhere in the world.

"It allows us to bring rehabilitation possibilities to regions in which people haven't thus far had access," says French orthopedic technician Jérôme Canicave. He's an adviser for Handicap International, an aid organization that helps people with disabilities around the world and has been conducting a pilot study since 2016 involving 19 patients in three countries. As project leader, Canicave digitally supervised the fitting of prosthetic limbs in Syria. "The technology is particularly useful in humanitarian emergencies," he says. He also believes it can be part of the solution for regions with inadequate care, in addition to an increased number of orthopedic technicians and production sites.

Handicap International commissioned the Bulgaria-based company ProsFit, which printed the sockets for lower leg prosthetics using a high-end industrial machine in Britain worth hundreds of thousands of euros. The quality of the sockets was higher than those produced using conventional methods, Canicave says, and patients found them much more comfortable.

But the sockets produced using cheaper 3D printers weren't quite up to snuff. They were unstable and tended to break quickly, Canicave says. Patients are still unable to wear such sockets for long periods of time. Joan Gwokyalya had the same problem. Her prosthetic broke after just three weeks. But she was lucky in that she didn't get hurt when it gave out. Still, the sockets remain a significant risk for amputees, who can fall and injure themselves if they break. Indeed, the lack of stability is the biggest problem with sockets produced using 3D printers.

Orthopedic technician Uli Maier is extremely skeptical about the hype surrounding the 3D printing of sockets. He works for Otto Bock, one of the world's largest medical technology companies. "The technology has amazing potential," Maier says. But he is bothered by technicians, many without a background in orthopedics, who claim that artificial limbs can be printed in only a couple of hours.

Prosthetic Research at an Open-Space Lab in Berlin

Uli Maier works for Otto Bock, one of the largest medical technology companies in the world. He researches the 3D printing of prosthetics, but he is skeptical of the current hype surrounding the technology.

Maier is part of a seven-person team researching the printing of lower-leg prosthetics. Initial products produced by the team have withstood some tests, but they aren't yet market-ready. "We still aren't able to print prosthetic legs that fulfill the strength requirements," Maier says.

Not all prosthetics innovation is focused on high-end medical products. There are also technicians who have come up with new inventions in the hope of being able to print them on the cheap. Karim Abbas, a student of medical engineering at Germany's FH Aachen University of Applied Sciences, is one of them. For his bachelor thesis, Abbas has developed a mechanical prosthetic for people who have lost a hand. His prototype is a simple gripper and the aim is for it to cost no more than 150 euros.

"But visual appearance is key for those who wear them," says Abbas. A team of students is now working on a five-finger hand in the hopes of bringing them to market in a Moroccan medical supplies shop. The team has also developed an inert hand that is only intended for cosmetic purposes.

How Students in Aachen Are Developing Affordable Prosthetics

Aurélia learned how to use 3D modeling programs during her architecture studies. She's helping the prosthetic team and improving the hand's appearance on the computer.

There are a number of small, low-budget initiatives around the world that are, like Abbas', not connected to a scientific study. The best known is called e-NABLE. Five years ago, American artist Ivan Owen used a 3D printer to produce a hand for a South African boy. It was purely mechanical in nature, but it was inexpensive and looked like someone's science fiction fantasy.

That marked the beginning of the Enabling the Future movement, a loose network of thousands of people around the world who use 3D printers to produce cheap hand prosthetics. Volunteers with access to technological equipment are brought together with those in need by way of a website. Children who frequently need new prosthetics as they grow can pick out their favorite designs and the costs are negligible.

"Hands from e-NABLE are good for motivating children," says Otto Bock technician Maier. "But when it comes to functionality and stability, they are rather limited." Because they are purely mechanical and made of plastic, they can't be compared to medical products that are designed to restore appendage functionality, he says. "Prosthetics are not all alike," Maier says. Still, he adds, the fact that 3D printing is able to bring people who want to help together with people who need it is valuable  as is the fact that they are all working together to find a solution.

In Uganda, the goal is the production of strong and lasting prosthetic legs. Technicians there are working with printers worth just $2,500 and a software program developed specifically for this project. The ultimate solution has to be viable, reliable and affordable  and there is still a long way to go before those three criteria are reached. Sometimes, the power goes out and the printer stops mid-print. Plus, because the prosthetics produced still lack sufficient strength, study participants can only wear them for four weeks at the most. After that, they get a standard prosthetic for free.

Joan Gwokyalya is now able to use her new prosthetic limb to walk short distances. She regained the ability to carry water canisters and bend down to do the laundry. "And I can carry my son on my arm again," she says smiling. Eight-month-old Jeremiah is sitting on her lap in her new single-room apartment, located just a few steps from a major traffic arterial. Motorcycle taxis are constantly speeding past. Gwokyalya is still afraid of them, but she uses them when she has to. She has found her bearings in her new life  with the help of her new leg. 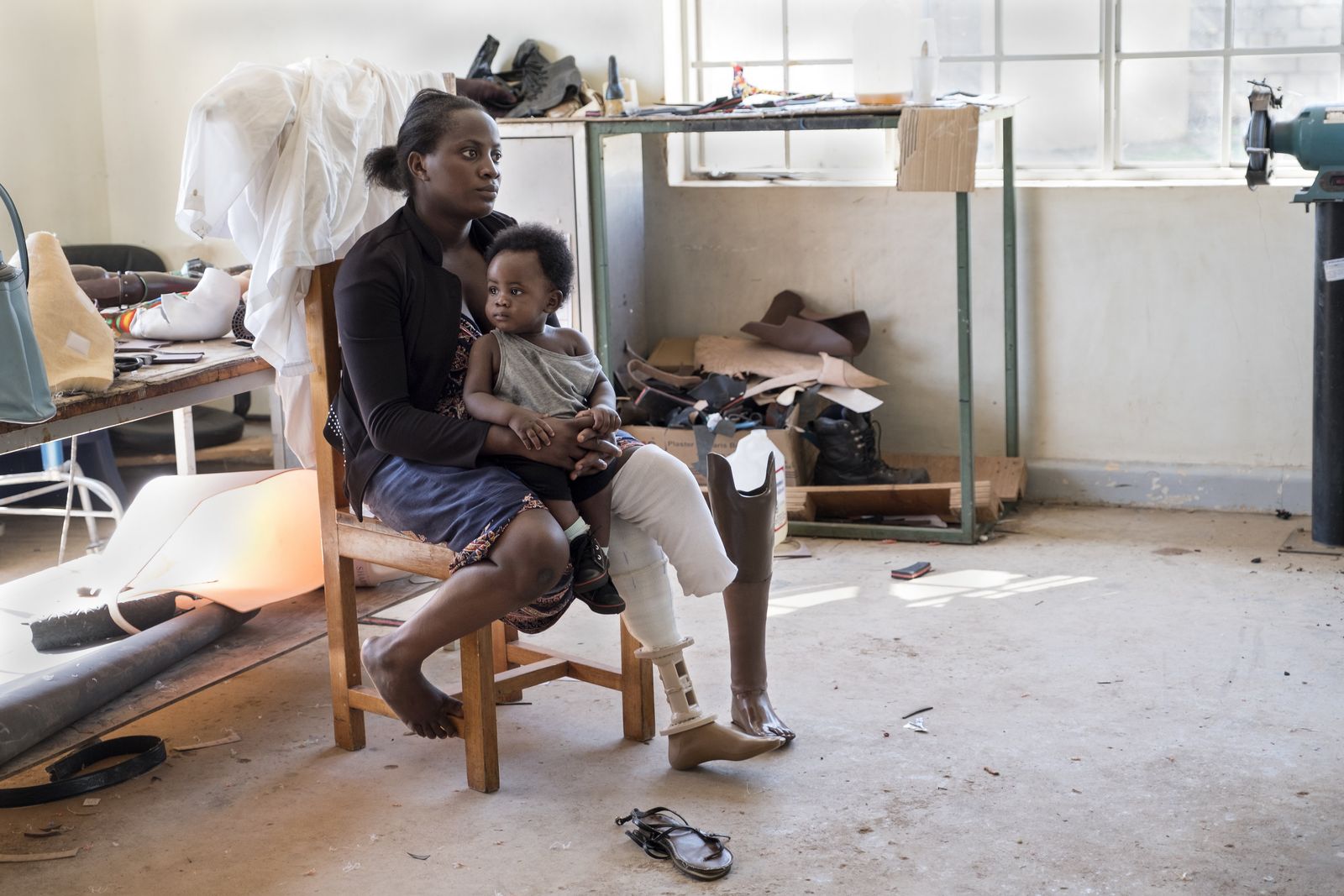 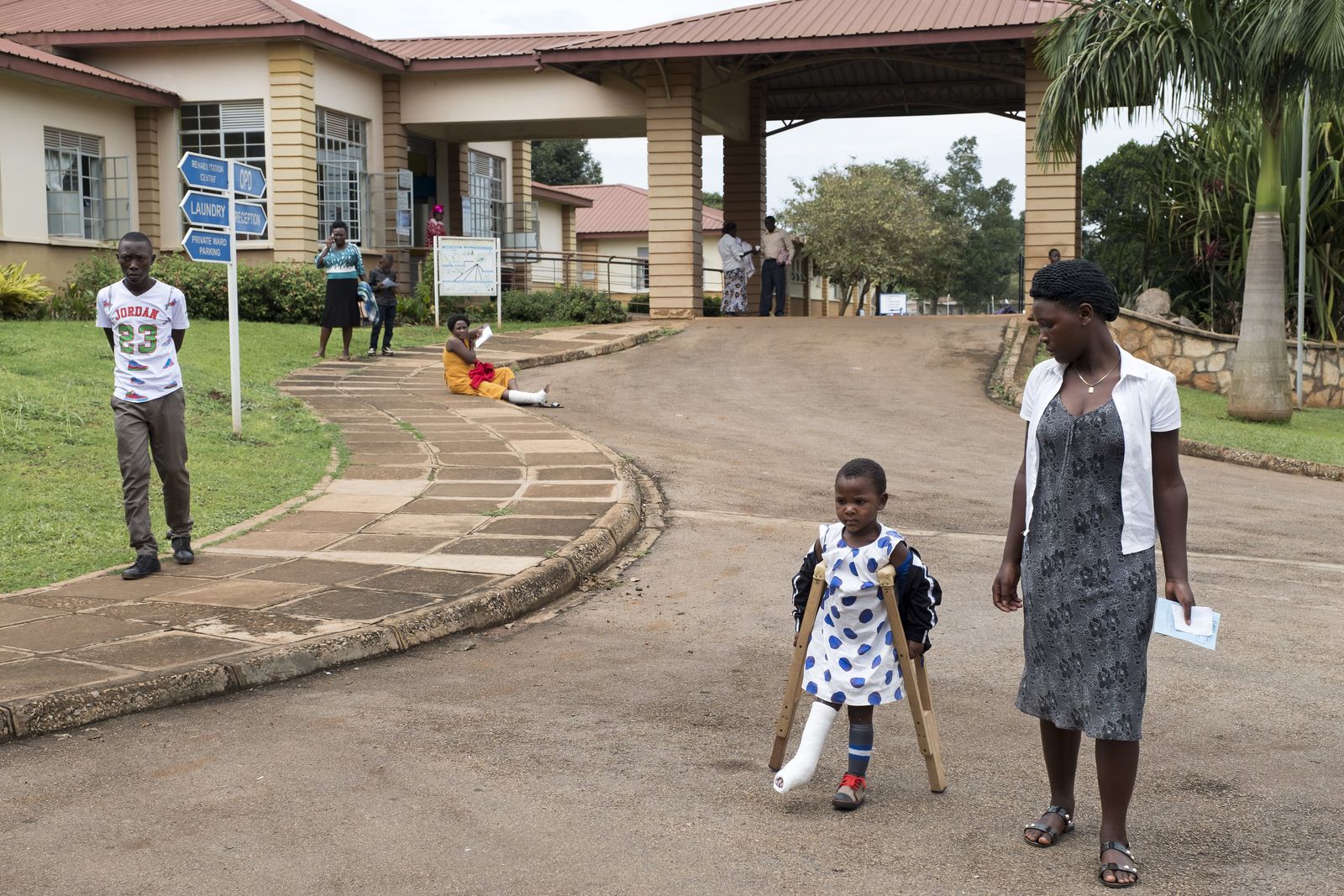 The CoRSU Rehabilitation Hospital in Kampala 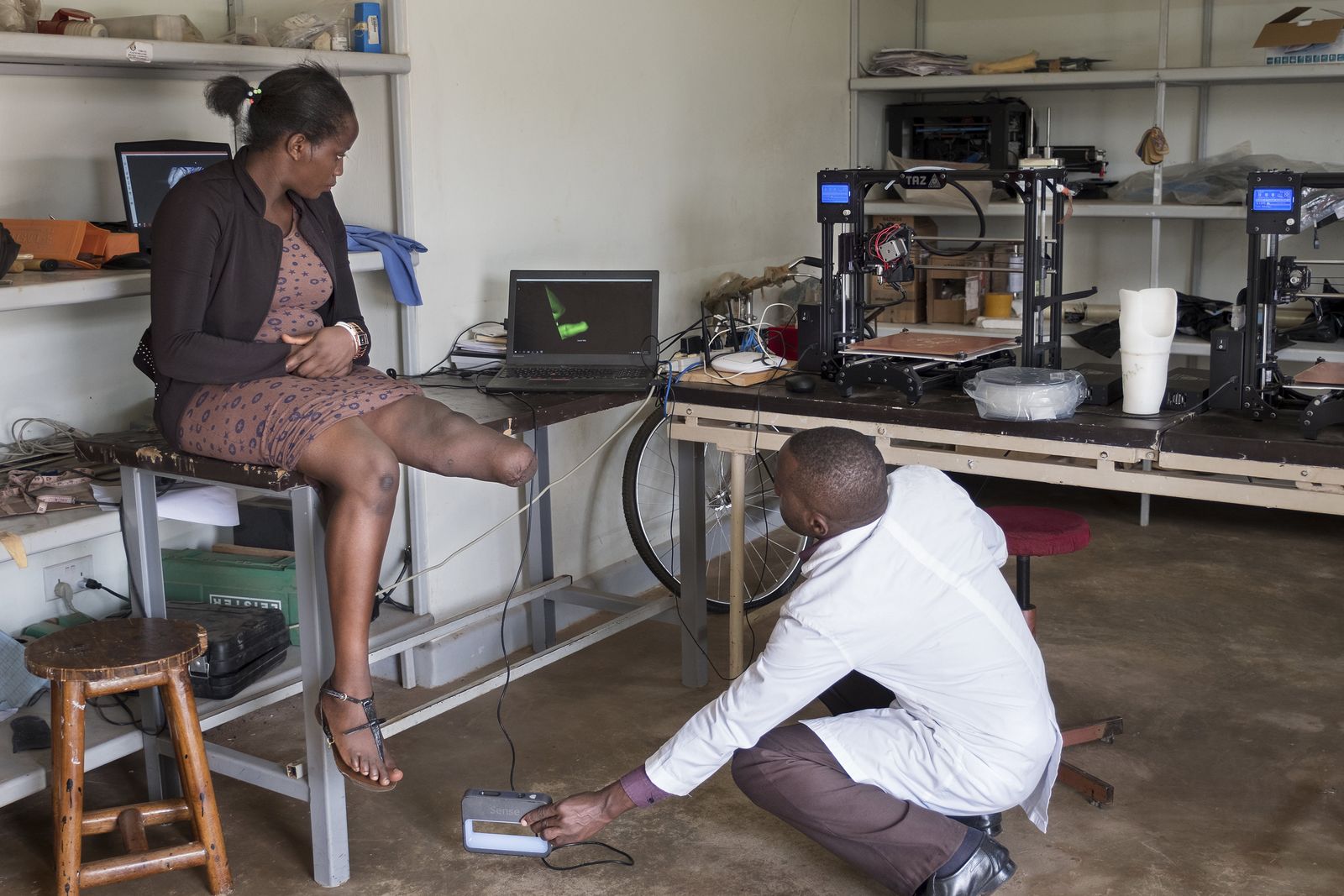 Orthopedic technician Jenan Taremwa scans Gwokyalya's stump, with the data appearing digitally on the screen. The scan only takes a couple of minutes, but printing the socket takes longer than eight hours. 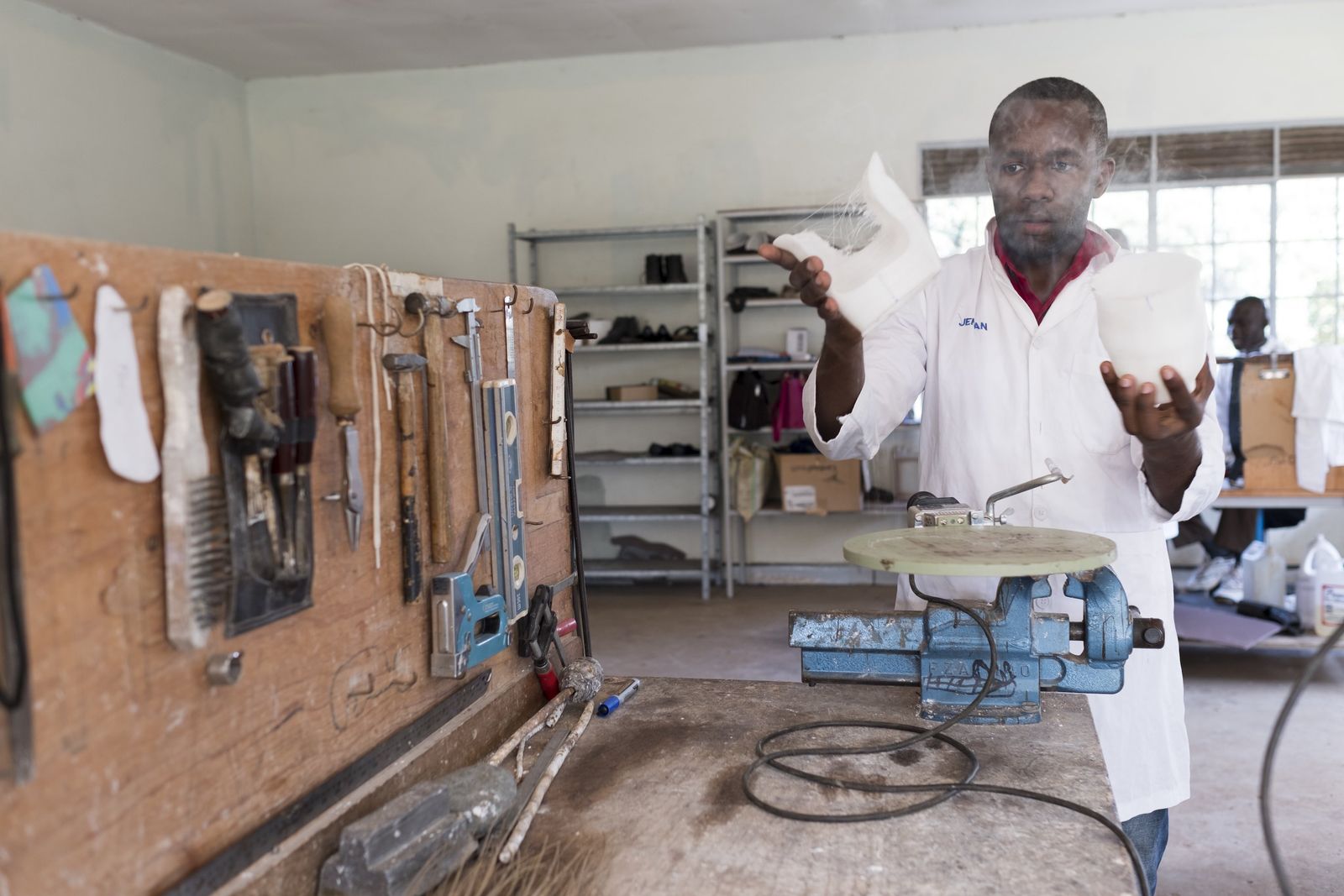 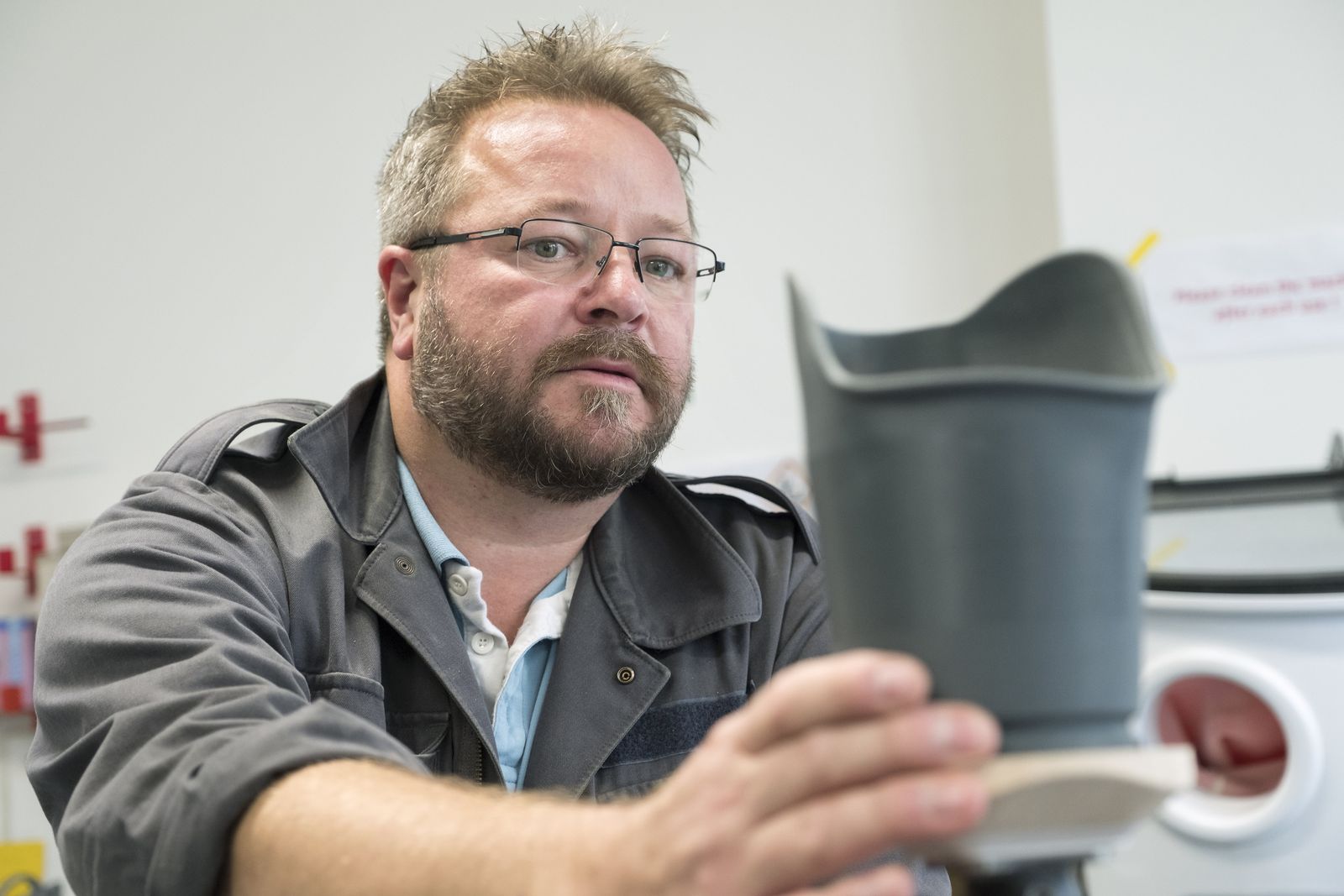 Uli Maier works for Otto Bock, one of the largest medical technology companies in the world. He researches the 3D printing of prosthetics, but he is skeptical of the current hype surrounding the technology. 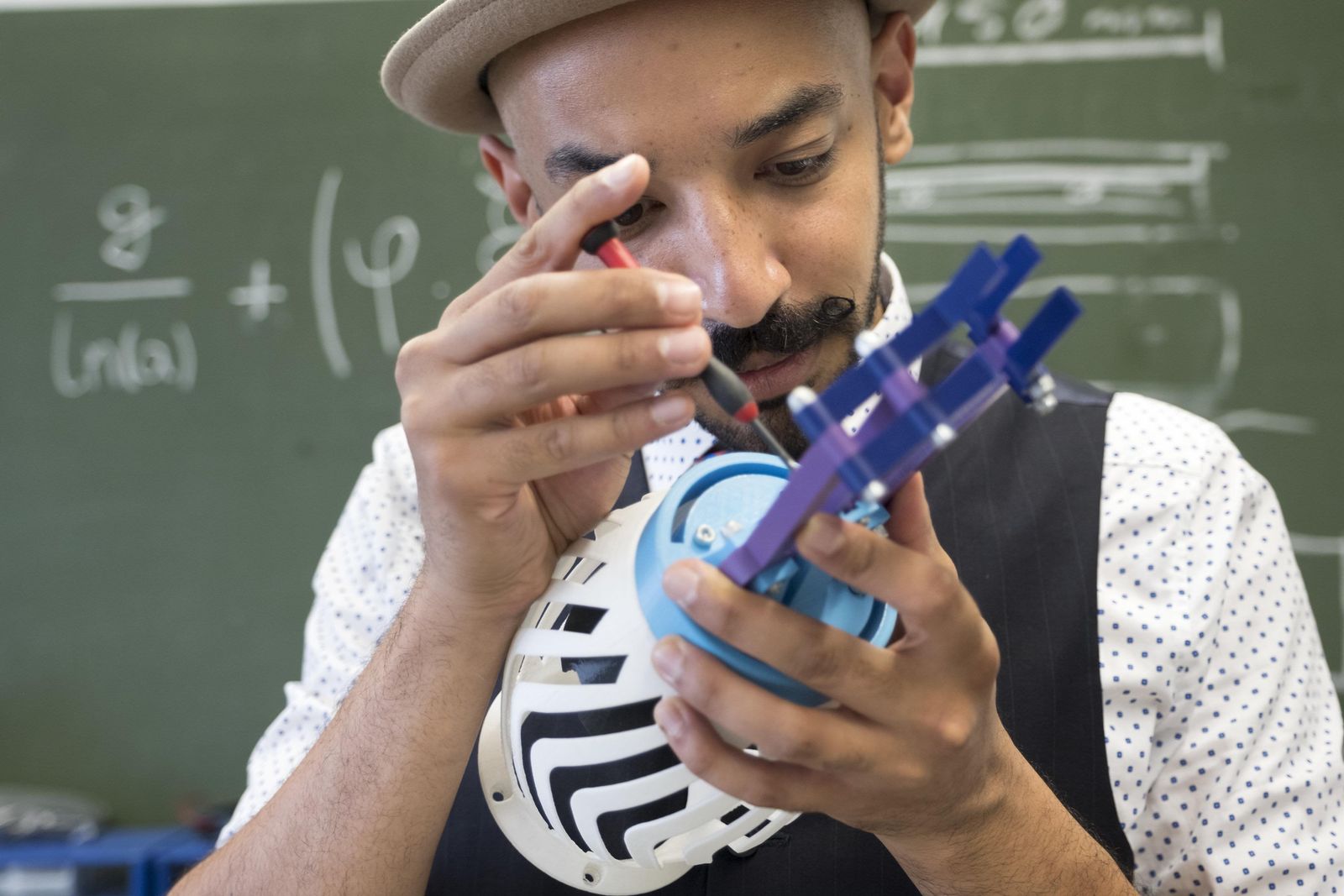 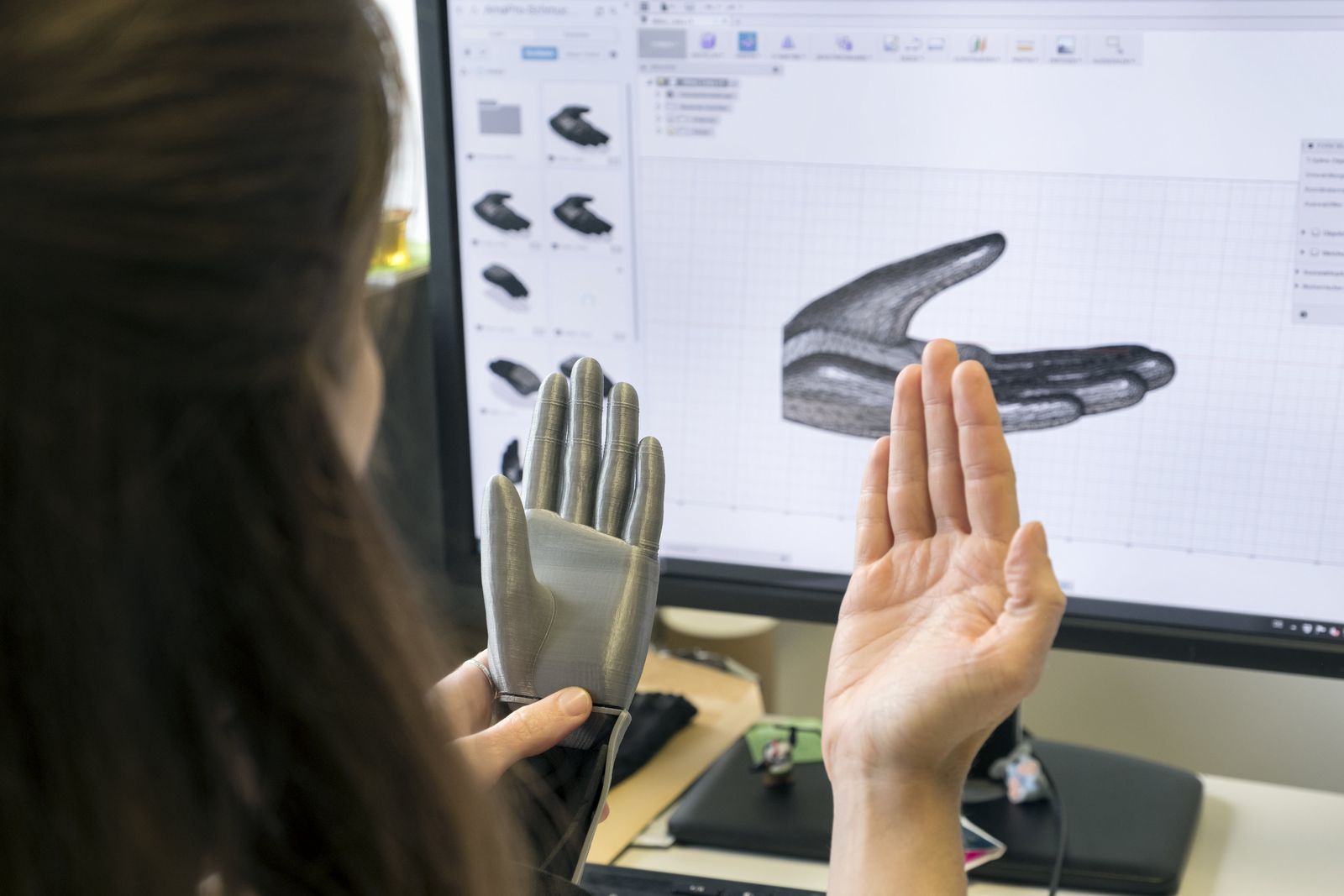 Aurélia learned how to use 3D modeling programs during her architecture studies. She's helping the prosthetic team and improving the hand's appearance on the computer. 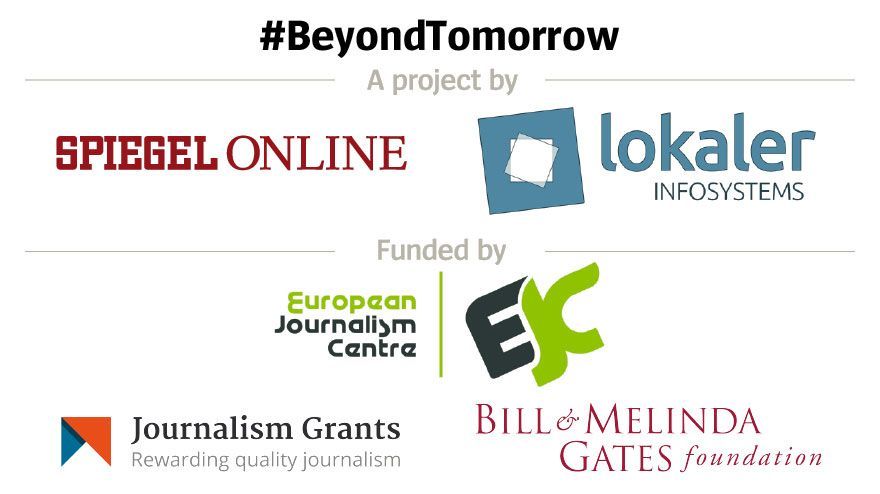