Young women who are actually still girls -- but who already have a husband, and sometimes even a child: It is a fate shared by Abaynesh from Ethiopia, Ramgani from India and Nayane from Brazil. Each has her own story and her own way of dealing with the situation. SPIEGEL ONLINE asked them to share theirs.

"Just after I was married, I wanted to continue going to school, but my family and my in-laws refused to allow it," says Abaynesh as she paces back-and-forth in the hut of wood, sun-dried brick and straw that she shares with her husband and two mules in Gindero, located in Ethiopia's Amhara region.

The tall green mountains, the fields extending into the far distance, a night so dark that only the stars remind us that our eyes are open: It all hints of a place that has been left behind by hurry and progress. There are no neighbors, no running water, no electricity and no clocks.

The sun hasn't even risen yet, but 14-year-old Abaynesh is already on her way to the river to fetch water. She carries a drum of more than 20 liters on her tiny back, but neither the weight nor her advanced pregnancy prevent her from walking swiftly and firmly.

Her in-laws decided to change her name to Jemata when she got married three years ago. For her, the name Abaynesh symbolizes the person she wanted to be but couldn't. "When I was little, I had very good grades and I wanted to be a doctor," she recalls wistfully.

Ethiopian girls can end up at the altar in two different ways. The most common is through an agreement between families. The second is kidnapping. If a girl's family refuses a marriage, the man will often simply kidnap the young bride. In such instances, the parents of the future bride have no option but to accept the union due to the demands of tradition and honor.

Forty-one percent of Ethiopian women between the ages of 20 and 24 were married as children, while three out of every four women between 15 and 49 have undergone some form of genital mutilation. Abaynesh is one of these women: Her labium was cut a few days after she was born.

These practices coexist in more than 20 countries, mostly in Africa. Sometimes they are closely related, especially when genital mutilation is seen as a prerequisite for marriage.

Abaynesh was not mutilated to guarantee her purity or to prevent her from experiencing physical pleasure, but rather to "facilitate male penetration once married," says Mesel Nigusie, who has carried out female genital mutilation for the last 28 years.

"It must be done before girls reach 15 days old because the body is stronger and heals faster," she says. She also claims that the wound heals and stops hurting within eight to 10 days. 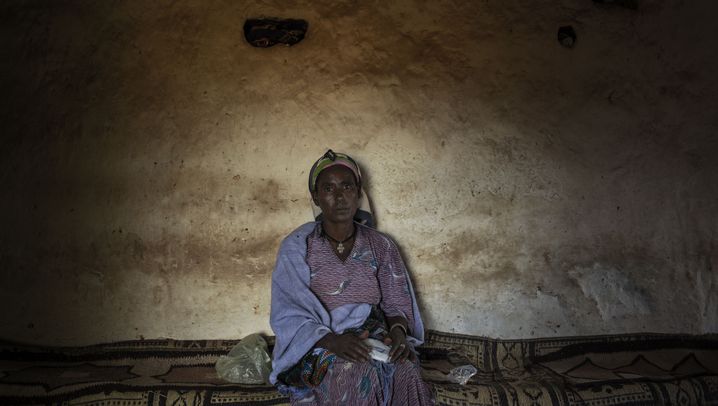 Abaynesh's father-in-law says that families prefer circumcised women for cultural reasons. He further claims that younger girls blend in better with their in-laws, are less rebellious and become better wives.

Abaynesh's eyes reflect the exhaustion that her body hides. She prepares coffee after dinner, crouched in the centre of her in-law's room. She remains unconnected to the family's conversations around her and hardly says a word.

And the same routine will be repeated the next day and the day after that -- perhaps as she daydreams about what it would have been like to become a doctor.

The child marriage series continues with the stories of Ramgani in India and Nayane in Brazil. This project was funded by the European Journalism Centre (EJC) through its Innovation in Development Reporting Grant Programme.