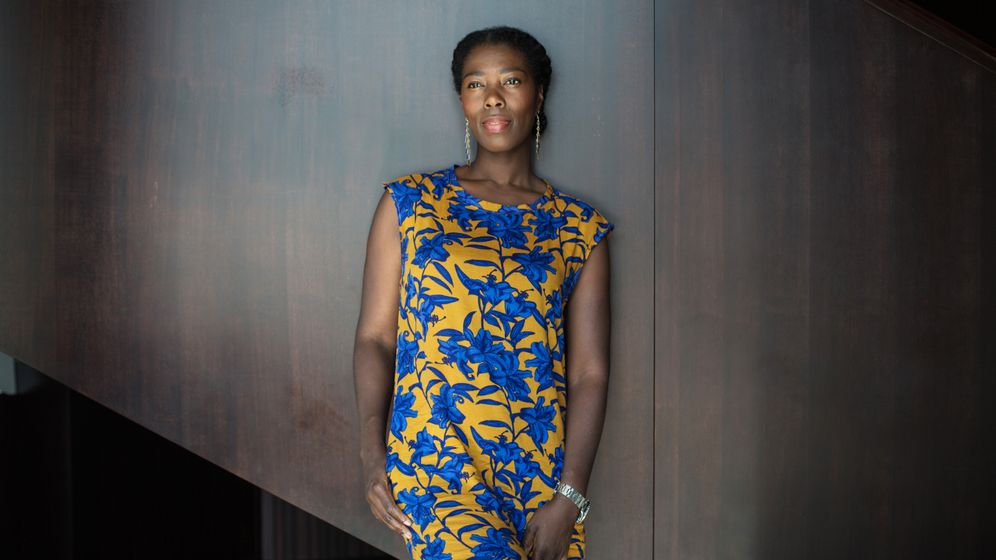 The location for our interview could hardly be more idyllic: a farmyard café in a village near Hamburg. Horses graze in the surrounding meadows while children sip unfiltered, locally produced apple juice. "I come here a lot," says Dayan Kodua, a tall, lithe African-German woman. "I like it here because it reminds me of my childhood."

That childhood was spent in a village in Ghana, where she tended her own cornfield and vegetable patch behind the house. Even as a little girl she began tilling the field, building fires in the oven and cooking meals. Each morning, Kodua would walk several kilometers to school and then back again in the afternoon.

"I learned a lot back then," says Kodua. Caring for her plants taught her things like patience. She also learned self-confidence because adults expected a lot from children, but also placed great trust in them. "Looking people in the eyes," as her grandmother constantly told her to do, also helped her pick up a healthy understanding of human nature.

Kodua says that her early years in Ghana were instrumental in creating the person she has become today. That's why it bothers her so much that many Europeans view Africans as being poor, uneducated and somehow disadvantaged. "It's just wrong," she says. "What I took with me from Ghana are real treasures that I carry inside me."

Kodua is not one to despair, no matter what life throws her way at any particular moment. When she was eight years old, her mother and sister emigrated to live with their father in Germany. She remained behind, staying with a friend of hers. "It was bad. I cried for several nights. At some point I found closure though," she says.

Two years later, in 1991, she finally boarded a plane to be reunited with her family. She knew nothing about what life might be like in Europe and didn't know a word of German. Furthermore, she had never had the experience of standing out or being discriminated against because of the color of her skin.

"My sister warned me right from the beginning that other children would insult me as a 'negro.' She said I should hit back and call them 'assholes.'" Kodua grins before growing a little more serious. "Unfortunately, I actually did have to get into fights pretty often."

Racism is still painful to her today, but she says she's gotten better at dealing with it. It hurts her, for example, when she senses that people think she is less intelligent or less educated because of her skin color. "Some people are totally surprised and say: 'You speak such good German!' I always answer: 'So do you!'"

Kodua has learned to no longer take racism personally. Yet she does keep track of how and where it happens. "People in the lower middle class don't accept me as being German and ask: 'When are you going back?' In the 'upper class,' you're more likely to hear things like, 'Our cleaning lady looks like you. Are things going well for you with us here in Germany?'"

She's aware of the images people have in their heads -- the clichés of poor black people in need of help who they also have a tendency to pigeonhole as servants. "I've even been mistaken for the help at movie premiers and been asked to serve drinks or put coats in the cloakroom."

Kodua says she loves telling stories and you can sense how she gets people to listen and bring them in to her narration. But the fact that she might one day become the kind of successful actress she is today was far from clear upon her arrival in Kiel, a port city in northern Germany. She initially struggled to feel at home and endure the insults. Her self-confidence took a hit. "I often walked around with my shoulders slumped," she recalls. Kodua also had difficulties with the language until one day a friend of her father's, a man named Rüdiger, told her: "You'll get stuck being a cleaning lady if you don't learn German."

Rüdiger signed her up for a language class and she went. Then came the turning point: Her mom's boss asked if she would be interested in modeling. "That changed a lot," she recalls. "I started walking upright again."

At the time, she was 14 and enjoyed trying out new things -- and that's when life began improving for Kodua. She tried her hand at cheerleading, basketball, modeling school, runway events and singing appearances with pop stars like Lou Bega or Right Said Fred. She did well enough in her classes and even drove her own car to school, bought with money she had earned herself.

After finishing high school, she trained as an actor -- first in Berlin and then in Los Angeles, landing film and television roles both in the United States and Germany. Success came quickly, and she also got married a few years back and now has two sons, aged two and six.

"I don't take it for granted that I have come this far," she says. "I'm grateful and have also learned to enjoy the small things in life, like the fact that it is so nice sitting here in the sun. I've had a lot of luck. There have often been people who helped me along the way. But I also approach people openly myself."

Now that Kodua has achieved so much, she is also making an effort to give something back. She wants to help instill a sense of courage in other people, especially other "Germans who don't look German." Her message to them: Don't put every adversity you experience down to your skin color. It is possible to succeed. Kodua still has fond memories today of becoming the first black woman to win the Miss Schleswig-Holstein pageant in her adopted home in 2001. "Up to that point, even I had trouble imagining anyone other than some blonde princess becoming a beauty queen," she says.

Looking back, Kodua believes that role models helped her overcome boundaries. These memories inspired her to start a German book project, "My Black Skin. Black. Successful. German." In the coffee table book, people of color share their stories of how they beat the odds.

As for her own story, Kodua says that more is to come -- she's still pursuing her dreams. "That major breakthrough, or 'life-changing moment,' hasn't happened yet," the actress says. For one, she laments that she still often gets typecast for cliché-ridden roles as an immigrant to Germany. Recently, for example, she played the role of an African journalist on "Tatort" ("Scene of the Crime"), Germany's most famous prime-time television show. The episode delved into the issue of xenophobic attacks.

Of course, another career choice might be less taxing. Would it make her any happier though? Probably not. And that helps drive her to keep pushing forward.