The trainees hiding their faces behind the handkerchiefs are mere children, ranging in age between six and 15. Those older than 12 carry guns that look more like old-fashioned rifles than modern weapons. The younger ones are holding sticks.

In a video that spread across Mexican media in late January, the group can be seen training on a rural mountain road, wearing sandals, sneakers and weathered pants. In the background, someone yells the commands: "Kneel! Weapons at the ready!”

The children are the newest members of the Policia comunitaria, the police force of the Nahua indigenous people in the Mexican state of Guerrero. This self-organized community police department is a decade-old institution, allowed under the customary law of the indigenous people, and is meant to ensure security in the villages.

But now the Nahua are feeling compelled to include their own children in the police force. The man yelling the commands in the video is Bernardino Sánchez Luna, head of the Policia comunitaria. When asked on the phone why he is handing weapons to children, he takes a deep breath and says: "Everyone needs to help: men, women - and the children too. Otherwise, we will never be able to control the threat posed by the criminals.”

Then Sánchez talks about the massacres of indigenous people, about the roadblocks, the daily threats being called in by phone and the protection money demanded by the local cartel, which goes by the name of Los Ardillos. "Plus, they have also started kidnapping our children, to force them to join the cartel,” he says.

The child police officers of Guerrero highlight two dangerous developments in Mexico’s complex landscape of violence. On the one hand, because the state is either absent from certain regions or is allied with the mafia, more and more regions of the country are being controlled by organized crime.

On the other hand, a growing number of young children and teenagers are being pulled into the conflict - partly because the cartels are in constant need of more fighters and warehouse workers, which they tend to forcibly recruit from among the younger generation.

The indigenous villages, in particular, are defenseless against the violence. The move to arm children in the community police was prompted by the massacre of 10 indigenous musicians in mid-January, who are thought to have stumbled into a Los Ardillos ambush.

"Putting children on the police force is a cry for help,” says Abel Barrera of Tlachinollan, a human-rights organization in Guerrero. "Left alone by the state, the indigenous people are defenseless against the mafias.” This problem, he says, has grown worse in the past few years.

Guerrero is located on the Pacific Coast in southwestern Mexico and is primarily known for being home to Acapulco, the beach holiday metropolis. Few people are aware, however, that Guerrero is one of the three poorest states in Mexico, and one of the regions hardest hit by organized crime. The thinly populated mountains of Guerrero are mostly home to indigenous people, but cocaine from South America is transported through the region, and the cartels have also planted poppies in the mountains for the production of opium and heroin. Mexico is the world’s second-largest producer of opium.

The cocktail of drugs, gangs and a weak state is, of course, a perfect recipe for violence and last year, fully 35,588 people were murdered in Mexico, the highest number since statistics were first recorded 20 years ago.

Organizations like the Sinaloa syndicate - which was until recently led by the drug boss Joaquin "El Chapo” Guzmán, who was recently incarcerated in the United States – or the especially bloody Jalisco Nueva Generación cartel (CJNG), act like a state within the state in many parts of the country. That’s also the case in Guerrero.

The arrest of "El Ponchis" in 2010: A drug cartel in Mexico had recruited the 12-year-old as a contract killer.

These large cartels and smaller criminal groups, of which there are thought to be up to 200 across the country, are forcing a growing number of children and youths to join them. "Parallel to the expansion of the new national guard by President Andrés Manuel López Obrador, organized crime is arming itself,” says Juan Martín Pérez García, the director of the children’s rights advocacy group REDIM. He says that the child police officers are relatively harmless by comparison - and more of an act of desperation.

A 2015 survey by the Inter-American Commission on Human Rights (IACHR) found that 30,000 children and adolescents under the age of 18 are "actively cooperating with organized crime” in various capacities in Mexico. They act as lookouts for the mafias, serve as couriers or work in the fields. The older they are, the survey found, the harder they are pushed to commit serious crimes, which include extorting protection payments, carrying out kidnappings and committing contract killings.

"Everyone needs to help: men, women - and the children too. Otherwise, we will never be able to control the threat posed by the criminals.”

And finding replacements is easy: According to official statistics, 7 million children in Mexico don’t go to school or are unemployed. According to REDIM director Pérez García, they serve as an ideal recruitment pool for organized crime.

A career as an outlaw, after all, looks far more lucrative to many than a life as a street vendor, seasonal worker or migrant to the U.S., but it carries a high price: "More than three children are murdered every day in Mexico,” says Pérez García. Since 2000, he says, 21,000 girls and boys have been murdered, and 7,000 are classified as missing.

So what can be done? Pérez García says that, of the 25 projects classified as high priority by President López Obrador, who has been in office for about a year, none addresses the plight of Mexico’s children.

The children’s rights network has released a "National Strategy for the Prevention and Supervision of Armed Violence against Children and Youth,” which calls for consultation with international experts and collaboration with civil society. Pérez García personally delivered the strategy paper to the president’s office. So far, he has not received an answer.

In Guerrero, for example, REDIM has called for DIF, the state family institute, to quickly take steps to ensure that that children go to school instead of on patrol. But exactly that is part of the problem: In many villages, there are no schools, and teachers only drop by twice a week.

"But when the narcos block the road to transport their drugs unmolested,” says Bernardino Sánchez from the Policia comunitaria, "then the teachers don’t come at all.” 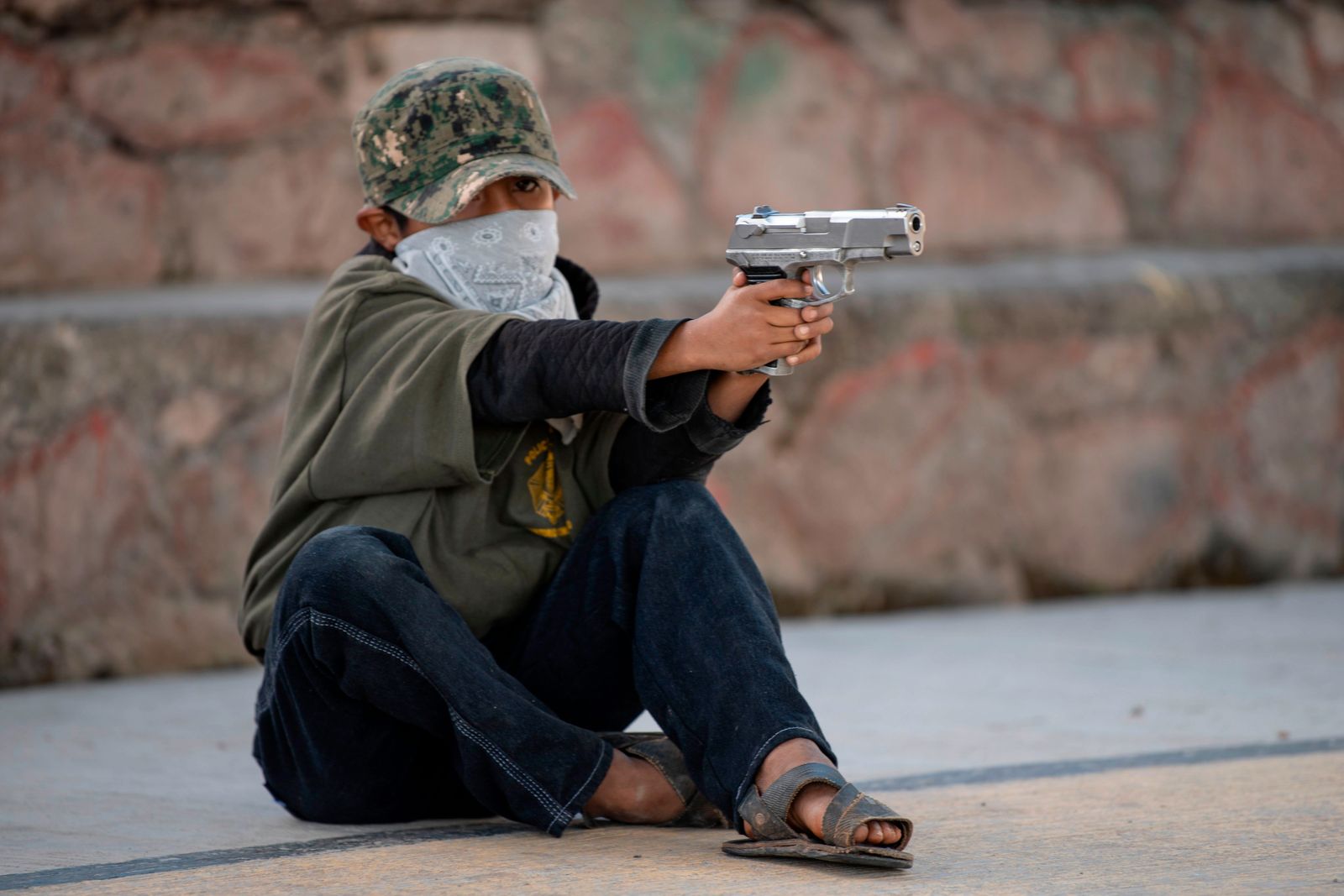 Children are now part of the Policia comunitaria, the police force of the Nahua indigenous people in the Mexican state of Guerrero. 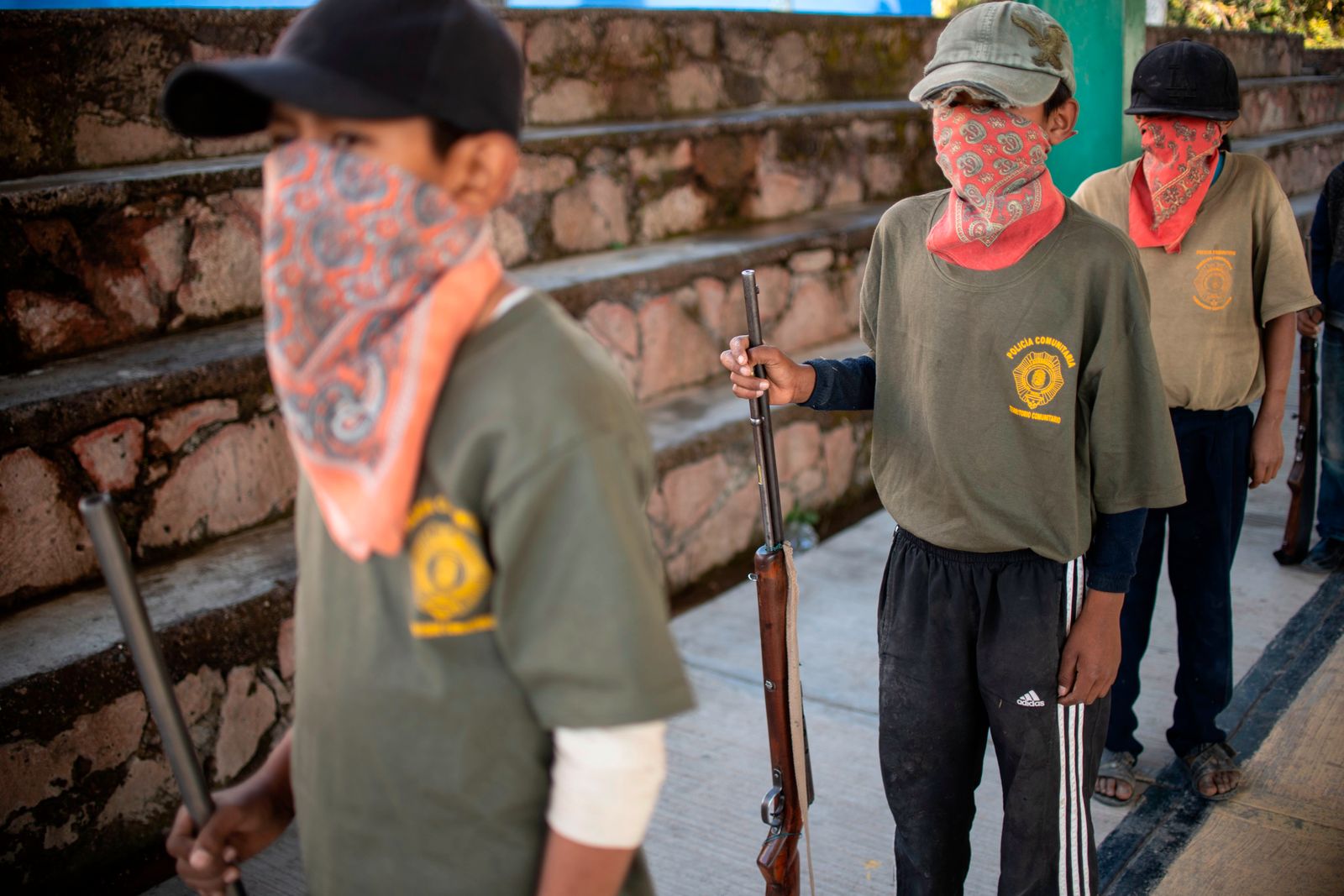 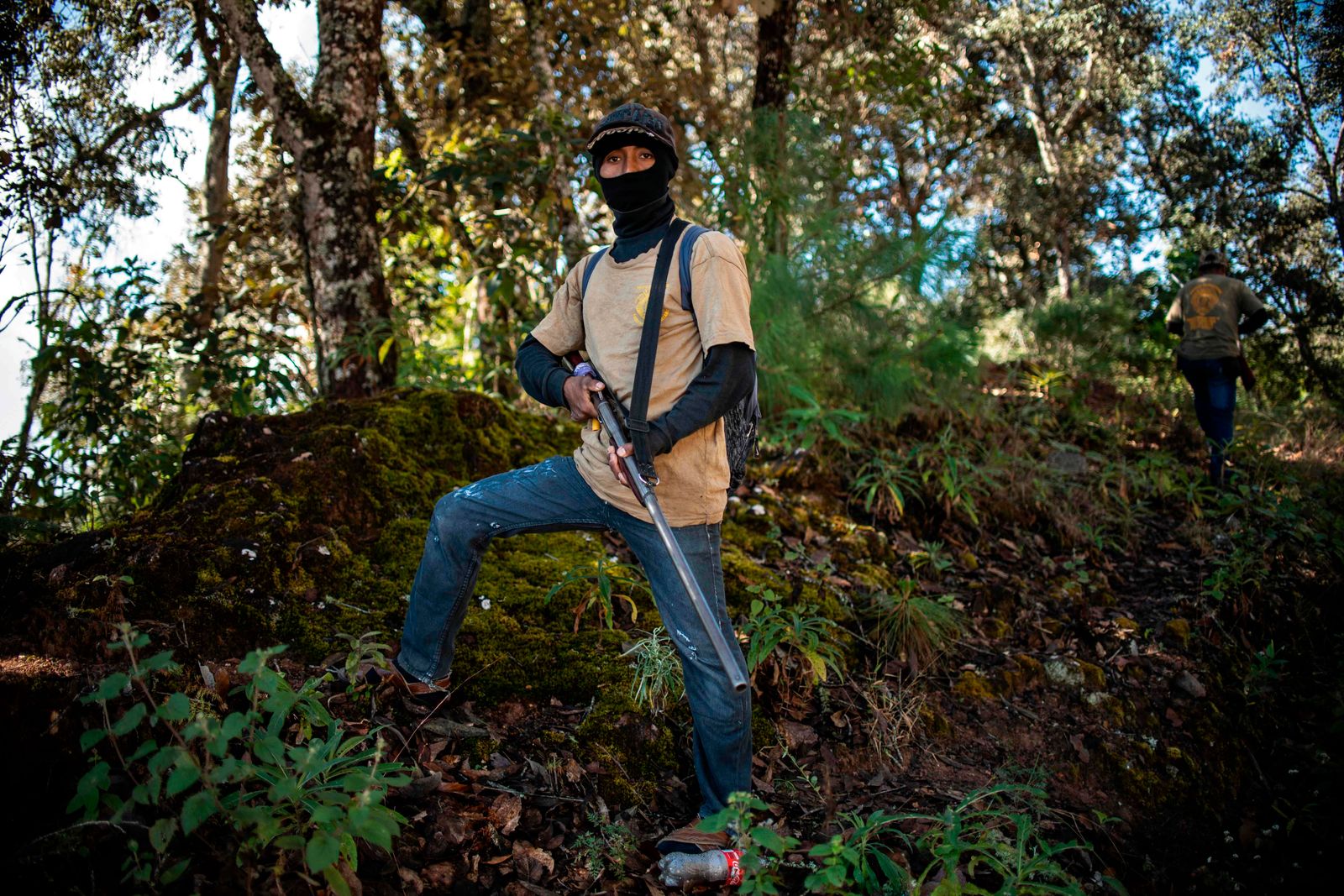 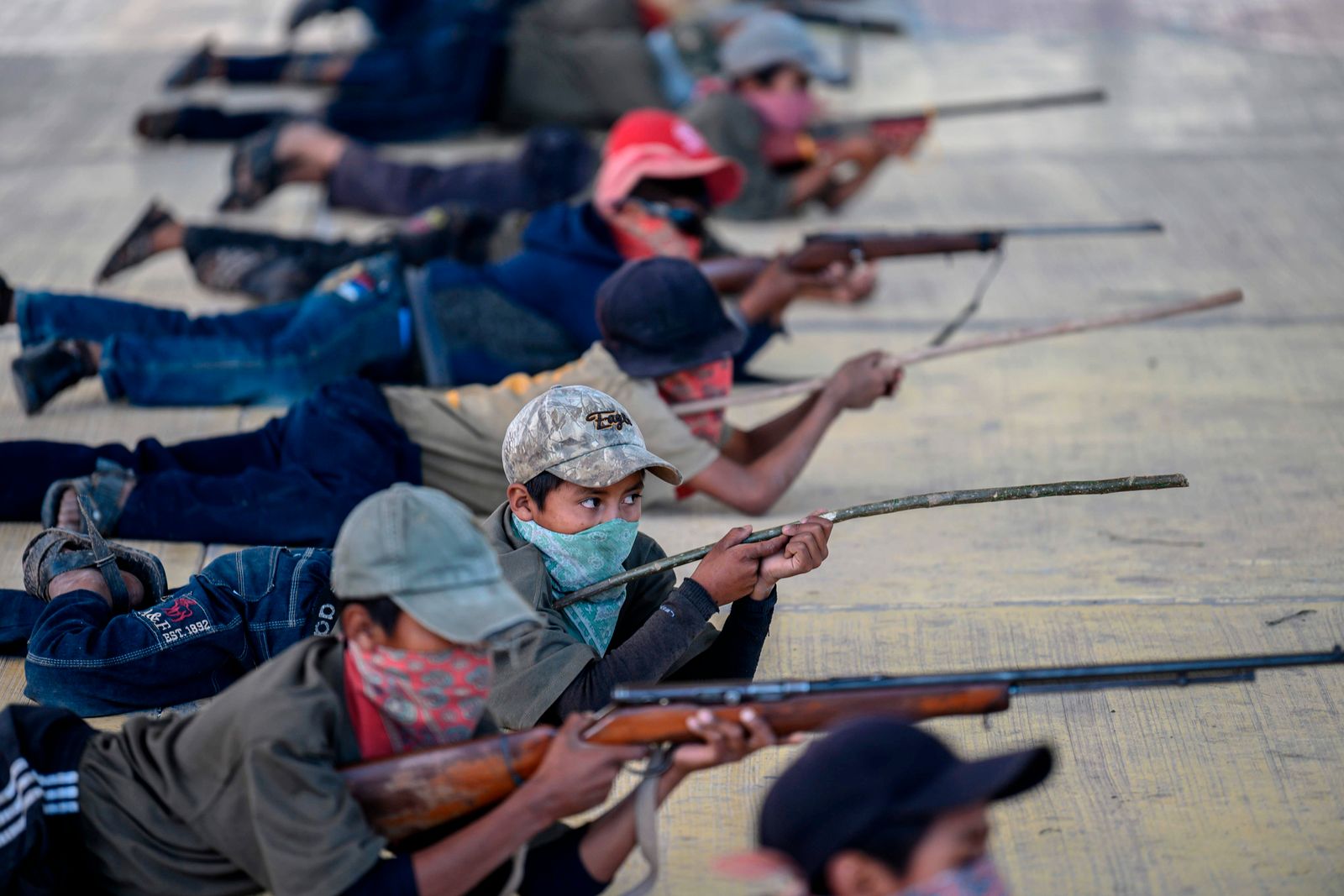